Those who've found previous versions of the series to be underwhelming won't have their opinions changed by this latest installment.

Past installments of Sarge's Heroes have weathered pessimistic reviews to enjoy adequate sales. Perhaps it's something to do with the series' motif, which takes players back to younger years, where dropping the plastic playthings into the blender or microwave provided nearly unrivaled excitement. Whatever the case may be, 3DO has been more than happy to bring each installment in its Army Men series to multiple consoles, and this time around, it's the PlayStation 2's turn. Army Men Sarge's Heroes 2 is by far the best-looking Army Men game, but annoying gameplay quirks ruin what could otherwise be an enjoyable experience.

As Sarge's Heroes 2 begins, Brigitte Bleu--an undercover vixen with an ulterior motive--reanimates General Plastro of the tan army. In addition to protecting the portals that let the army men teleport to the real world, Sarge wants to find out the details behind Bleu's reanimation scheme before the tan can use it to their advantage. The same third-person shooting gameplay from the last Sarge's Heroes has returned with few changes. There are plenty of traditional weapons to use such as sniper rifles, grenade launchers, bazookas, mortars, and the like. Sarge and pals traverse locations like a refrigerator or kitchen table while destroying small squads of tan army men and accomplishing objectives that range from protecting a teammate to search-and-destroy affairs. As each small squad of tan army men is destroyed, you're rewarded with full health before heading off to encounter the next group of enemies. The system works fairly well until you die and realize you have to start the entire level from the beginning. Some of the levels can take almost a half hour to complete, and the lack of midlevel save points can become frustrating to say the least. There are also several cooperative levels where a comrade comes along for the mission. Oftentimes your own teammate will repeatedly shoot you, making the level far more difficult than it should be.

While the structure of the game can be frustrating, it's made worse by poor gameplay execution. You play as several different characters throughout the game, but they all control basically the same. Sarge can kneel or lie on his stomach while firing, jump and climb, or strafe using the shoulder buttons. As in survival-horror titles, holding left or right on the analog stick makes Sarge spin on an axis. The only way to make him run forward is by holding up on the analog stick. This clunky interface is incredibly annoying when attempting to flee from gunfire. It's common to lose a second or two waiting for Sarge to get turned in the right direction, resulting in many unwarranted deaths.

Making matters worse, the game uses an auto-aim feature that hits its mark less than half the time. Just when you feel as if you can rely on it, it lets you down in a crucial situation. Even if you attempt to avoid the auto-aim by going into first-person view, the sluggish aiming reticle makes it almost impossible to pick off enemies with any sort of efficiency. This is somewhat remedied by the horrible hit detection, which occasionally lets you drop tan enemies without lining the reticle up properly. Making the gameplay all the more infuriating, there is an invisible bullet-blocking force field that surrounds each object--many times your shots will be blocked while the enemies' shots somehow find their mark.

Sarge's Heroes 2 for the PlayStation 2 is by far the best-looking Army Men game yet. Unfortunately, this isn't saying much. The texture resolution has been improved so that the textures are no longer stretched-out, blurry messes. But other problems from past installments of Sarge's Heroes on other consoles have returned. The same low-poly object models are included, and the usual suspects like pop-up, clipping, and erratic frame rates have returned. On the positive side, the army men have a nice shiny look, and there are a few noteworthy effects like reflections and particles that are used quite generously. The explosions also look particularly good. Even so, the repetitive enemies grow old quickly, and the ho-hum bosses fail to spice things up. Overall, Sarge's Heroes 2's graphics are the result of an old game engine running on a new console.

If the 17 levels of single-player action aren't enough, 3DO has also included a multiplayer mode for two players. There are just two variations available--deathmatch and family. Both modes are basically the same, with the only difference being that you spawn with several weapons in the family mode and no weapons in the deathmatch mode. You may set the kill limit to three, five, seven, or unlimited, and there are five maps to gun it out in initially. The multiplayer modes run with a nice fluidity the majority of the time, and the maps are huge. But since there are just two people playing at once and no radar, deathmatches often turn into lengthy bouts of hide and seek.

The sound in Sarge's Heroes 2 is nothing special. The FMV cutscenes feature adequate voice acting, but the remainder of the game's audio consists of the stereotypical gunshots and explosions. Surround sound support is nonexistent, and the music is made up of makeshift techno with military drum programming. Characters will occasionally converse with one another midlevel to clarify objectives, but otherwise, the sound in Sarge's Heroes 2 is par for the PlayStation 2 course.

Army Men: Sarge's Heroes 2 is the best the series has to offer, but that's not saying much. The gameplay is frustrating, the graphics are average, and there are plenty of bugs that have not been addressed. If you've enjoyed Army Men games in the past, Sarge's Heroes 2 is more of the same. But those who've found previous versions of the series to be underwhelming won't have their opinions changed by this latest installment. 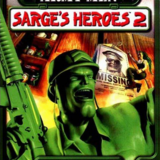 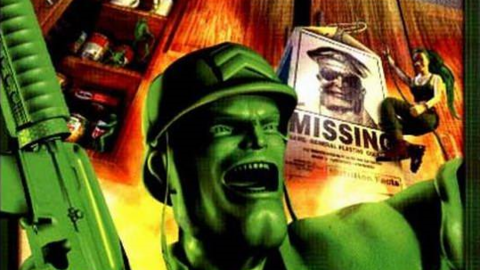