Overall, Army Men II is fun, but it's just not all that it could be.

The original Army Men was a decent game, though it didn't quite live up to many gamers' expectations. Awkward controls, dated graphics, and (on some missions) surprisingly difficult objectives detracted from the unquestionable allure of pitting those little plastic guys against one another. With Army Men II, 3DO seems to have corrected a number of the original game's issues. The problem is, Army Men II fails to cash in on its solid premise and ends up feeling more like a version 1.1 release than a full-fledged sequel.

As the game begins, a beautifully rendered scene sets the stage for the action: Green troops stumble across a pan-dimensional teleporter that transports them to a strange world (ours). Tan troops follow them through the portal, and a firefight breaks out on a kitchen countertop far, far away. If only the game continued on like this...

After an all-too-brief opening mission in which you must guide your troops past roaches and electric stovetops, you all get teleported back to the world of Army Men - where you will find yourself for most of the game. Every once in a while, you'll get another mission back in our world, but these pop up far too infrequently. Worse yet, not a single one of the maps from the "real world" missions is available during multiplayer games. What 3DO was thinking here, I honestly cannot fathom.

Gameplay is essentially the same as in the original game. Again, you command Sarge, a hard-nosed soldier who can not only handle every weapon known to man but also drive any manner of military vehicle (including PT Boats). You view the action from a top-down perspective and guide Sarge using the keyboard and/or the mouse. The default keys take some getting used to, but you can remap them. Mouse control is sufficient most of the time, but it's not as intuitive as what you'd find in a good real-time strategy game. In case you're wondering, your troops follow your lead around the map unless you select and assign them specific orders.

You can also order specific units or groups of units to attack, defend, hold position, or rally around you. Additionally, you can now save your game at any point during a mission, which is nice because some of the missions have several stages. Perhaps the best new feature, however, is the addition of experience ratings for your troops. Each solider under your command gets a little more proficient with each mission he survives. In other words, it is in your best interests to keep these boys alive for as long as possible.

Other new things to look out for: The game now offers a few new weapons, including the super-cool magnifying glass, an M80 (woo hoo!), and an aerosol can that can be used with lighters to do lots of wonderful damage. Sarge also gets to tote around a sniper rifle, which is perhaps the best weapon in the game.

Army Men II seems quite a bit more forgiving than the original, with well-stepped difficulty levels that let players of any skill level move through the game. Most missions are well designed, with interesting (and often familiar) objectives and settings. There are a handful of missions that seem to have just one too many objectives - you know, the type that just never seem to end - but the rest are well thought-out and fairly challenging.

Of course, the horrendous pathfinding adds considerably to the challenge. Your units simply can't find their way out of a foxhole, which means that you must guide them around the maps using baby-step destination points (click a little ahead, click just a little farther ahead, and so on). This proves to be extremely aggravating, especially on missions where time is a factor. Also, the pathfinding is at its absolute worst when controlling the PT Boat. Not only can the AI not find a simple path through the water (the wide-open water, mind you) but the game keeps jerking the camera angle back to center on the boat, even when I wanted to scan around for hostiles.

The soundtrack deserves mention. The music is a collection of classical pieces that at times fits the situation and at others seems terribly out of place. The cutscenes, on the other hand, are fantastic and for the most part funny (especially the scene that plays when you fail a mission).

Multiplayer support is strong, letting up to four players compete over IPX or TCP/IP connections. Head-to-head play over serial and modem links is also supported. Army Men II provides a good skirmish mode - one in which you can actually beat the computer - and also lets you fill in empty slots in a multiplayer game with AI opponents. The setup screen for multiplayer games is slick, but the selection of maps for these games is pretty weak. Where's that cool kitchen countertop map?

Overall, Army Men II is fun, but it's just not all that it could be (apologies for the weak Army joke...). Let's hope 3DO will patch the AI and the pathfinding and make some of those real-world maps available for multiplayer games. Until then, you'll probably only really like this one if you're already a big fan of the original. 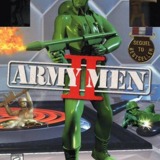