I just felt taken for a ride. And a bumpy one at that.

The M1A2 Abrams is America's main battle tank. It is a 60-ton monster with a 1,500 horsepower engine that drives it at speeds up to 65 miles an hour. It can roll over a car like you roll over in bed. Its 120mm cannon can spit a shell of penetrating high-explosive shot 3000 meters, instantly destroying any piece of armor that any nation could field. The modern tank battles it was designed to fight are characterized by fast speeds and long distances. An enemy doesn't even know the Abrams is there until that round of HEAT comes through his turret. In the Gulf War it was not unusual to read of four M1A2s destroying three dozen Iraqi tanks in about twenty minutes, with the Abrams not suffering a scratch. The Iraqis couldn't count a single destroyed Abrams on their butcher's bill during the war.

All these things were in my mind as I loaded up Armored Fist 2 and set about exploring the world that NovaLogic had prepared for my entertainment. I began by attempting to drive my tank around and see the sites. There was a nice tutorial with an authoritative-sounding commander shouting orders in order to help me understand navigation, weapons handling, and combined-arms warfare. There were four speed settings I could use: stop, 1/4, 1/2, and full. Engaging any one of them immediately sent the tank on its proscribed course without any steering or input from me. When I did want to steer - say, to avoid a boulder that we were about to drive over - the speed setting disengaged and the tank stopped. My first lesson: Tank drivers can't steer and move ahead at half power at the same time. (They need to use a manual throttle control.)

But at least we were under way! I wanted to see what my new hi-tech M1 could do to the slightly chunky and woefully choppy scenery that NovaLogic had provided for me, so I started to drive over things. Well, that was the plan. Nothing, however, could be crushed, or even budged, by my 60-ton truck running at full speed. Not other tanks, not fuel storage, not trucks, not water towers, not even tents and netting. Only supply depots would blow up when I hit them. I wasn't thinking too highly of my new tank. Aren't large explosions supposed to ensue when a tank runs into, for instance, a tanker full of fuel? It was my first hint that all the hype about this M1A2 Abrams had been just that: hype.

A modern tank commander has state-of-the-art technology at his fingertips to survey the situation, communicate with the other tanks in his platoon, and deliver ordinance on target. A crew of four drives the tank, loads shot, fires the cannon, and monitors the hi-tech instruments. I didn't see any hi-tech instruments in my particular tank, and while I found that the crew handled themselves pretty well, the other tanks in my platoon were a positive disgrace: missing their targets and exposing themselves to fire. Maybe it was because I just didn't have the ability to give them proper orders: All I could do was set a formation and tell them to move, stop, fire, and don't fire. Heck, I couldn't even move a waypoint without replotting my entire course. Maybe it was my leadership that was poor, and not them... I began to feel a bit better about the Abrams when I opened fire with my machine gun. To my amazement, this rather humble device was so powerful that a short burst from it would level a three-story building! I hadn't realized that bullets could do that. Nor had I realized that a tracked vehicle could climb a 60-degree incline at well-nigh full speed. I was feeling good. My tank could do things no other tank could. This good feeling persisted right up until I got into some action.

That's right: There were foes to crush in Africa, The Soviet Union (I thought that didn't exist any more), Belarus, and someplace else. It doesn't matter. All the locations had the same washed out, chunky look to them, and all the missions (something like 50 of 'em) seemed to take place within a few hundred square yards. For a tank that's supposed to engage enemies from over a mile away, I found these close quarters cramping. It was also pretty disconcerting to have weaker enemies kill my tanks - tanks that have never suffered a battlefield loss - while my sabot and HEAT rounds bounced harmlessly off their shells. I soon grew bored with missions in faraway areas, because no matter what the goal or location or time of day, they all felt exactly the same and all took place in a small, confining areas.

It was a sore disappointment to me. I had been led to believe that Yankee know-how was the best in the world, yet here was a hi-tech armored vehicle that was half white elephant and half super machine, and not in the right halves. I didn't feel like I'd had fun with my tank. I just felt taken for a ride. And a bumpy one at that. 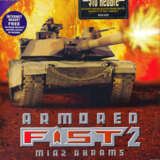 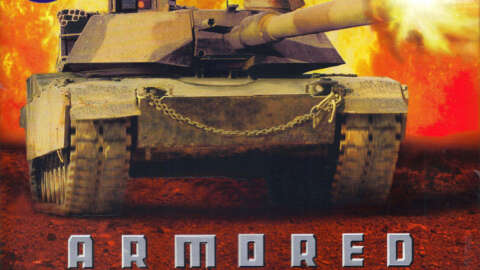 I just felt taken for a ride. And a bumpy one at that.