Armored Core V can field some fierce firefights, but the combat is encumbered by repetitious missions, simplistic objectives, and dull visual design.

When two meticulously tweaked mechs meet in combat, the results can be explosively fun. The battle for position might see one bouncing between buildings five stories in the air, while the other jets along the ground to acquire line of sight. They deploy reconnaissance aids and radar jammers to win the information war and then use long-barreled cannons and energy blasts to win the physical fight. Leaving your enemy a smoking ruin can be very satisfying, but in Armored Core V, this kind of satisfaction is all too rare.

To learn the tactics needed to succeed on the battlefield, you need to spend a lot of time running missions through the drab, somber environments. AC aficionados may have the tactics down, but to unlock the parts needed to build a worthy mech, you need to slog through a lot of mind-numbingly easy missions. When the challenge comes later on, or when you jump into competitive multiplayer, you can find the kind of combat that delivers on the promise of purpose-built battle bots dueling to the death. But even if you are well prepared for a fight, Armored Core V still spends too much time making you work toward the good stuff.

At least many of the missions are short. The prevalent Order missions often don't last longer than a minute. You load up the battlefield, wait for your systems to come online, and travel straight until you encounter the enemy. When the orange box appears indicating target lock, you pull your triggers and destroy your foes. Then you get paid (minus ammunition and repair costs) and are bumped back to the world map to select your next sortie.

While Order missions are little more than brief excursions to pad your wallet or test your loadout, Story missions are longer endeavors. Part of this is due to the cinematic scenes that tell a nigh incomprehensible tale of a conflict involving a domineering corporation, a desperate rebellion, and a despotic figure named "Father." Parsing out the particulars is a challenge with no discernable rewards; fortunately, Story missions also present a challenge when it comes to combat.

In addition to tiny tanks and puny helicopters, you face a variety of larger mechanized forces, including mobile sniping platforms, nimble aerial craft, heavy shield-bearing constructs, and missile-launching installations. When arrayed in force against you, these require a bit more maneuvering, but defeating them is still just a matter of waiting for the orange box to appear and pulling the triggers. It's not until you face the toughest foes that you have to start playing skillfully.

The biggest AI challenge is fielded by bosses and enemy mechs (ACs, in the parlance of the series). Bosses generally subscribe to the "bigger is better" philosophy, and their presence has a positive effect on the environmental design. Most of your missions send you through drab gray cities or dull brown industrial sites. Visual boredom sets in quickly, and only when you have to chase an armored train around an elevated track or peck at a towering, four-legged war machine do you get a glimpse of something more intriguing.

Enemy ACs can also look cool, but the only clear view of them you get is at the start of a duel. During actual combat, they dart around much more quickly than other AI foes, and you have to be smart about movement and weapon choice to take them down. This is when you get a taste of the quality combat that Armored Core V can deliver, combat in which tactics, adaptability, and execution matter. It's also when the game inspires you to start thinking critically about your mech loadout.

When you first enter the assembly to work on your mech, it can be daunting. There are a lot of numbers, abbreviations, and attributes to track, but once you spend some time tinkering, things start falling into place. You begin to diversify your weapons in order to effectively deal different types of damage. Changing your legs from bipedal to tetrapod gives you a lot more weight to work with, while choosing a booster with high acceleration makes your AC more nimble. Fire control systems, cores, and generators can all affect your battlefield presence, and you unlock numerous parts in each category as you complete missions. Slotting in new pieces and seeing the benefits in combat is a pleasing endeavor, and you can also enter the paint shop to further customize your bristling beauty.

It's best to have a few different loadouts ready to go, especially when playing with your team. All Armored Core V players are encouraged to enlist in an online team and join the persistent struggle for world map dominance. You can play Story or Order missions with one other player (a teammate or a hired mercenary), but Invasion missions let you team up with up to four other teammates, one of whom can play the recon role of the Operator (scanning the map, setting waypoints, marking targets, and the like). There are a scant four Invasion variants, most of which simply involve destroying enemy facilities while dealing with AI resistance. These are basically Order missions on a larger scale, and with some good mechs and a competent operator, even tougher sorties can be quickly completed.

If you want to win territory and put your team's name on the map, you need to step up to a Conquest mission. To embark on one of these, you need a certain number of team points, which you earn every time any member of the team completes a mission. Rolling with team members on Invasion missions nets you more team points, so it's possible to assemble a squad and get into a good rhythm of building up points, attacking territories, and defending territories you've already claimed.

Conquering territory for your team can be satisfying, but the repetitious missions, bland environments, and team point requirements combine to create the sense that you are grinding out progress, rather than joyfully claiming victory on the field of battle. Further combat variety is offered by big boss fights (unlocked when your team reaches a high level) and competitive multiplayer, but these areas are problematic as well. The boss fights are hampered by unclear objectives, while the standard eight-player deathmatch and five-on-five team deathmatch modes reward only the winners, making them fruitless endeavors for most players.

These competitive contests can offer some tough combat, however, and putting your finely tuned AC to the test and winning is undeniably gratifying. Unfortunately, the bulk of Armored Core V is not as entertaining. For every challenging sortie you enjoy, you must undertake many more dull, simplistic missions. The focus on connected combat could have made Armored Core V an engaging entry in this long-running series. Instead, the franchise fails to put its best foot forward. 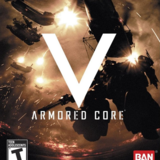