Armored Core: Last Raven offers very little new content to satisfy series veterans, and is completely inaccessible to everyone else.

There's been at least one Armored Core game released each year that the PlayStation 2 has been on the market. It's easy to shrug off each new installment as just another giant robot game, but for those who have been indoctrinated in the way of the mech, each Armored Core game demands hours upon hours of painstaking tweaking and tinkering in pursuit of the perfect design. If nothing else, the staggering array of customization options is impressive. At this point, though, the Armored Core games have become insular and unapproachable by anyone who isn't a card-carrying member of the mech-of-the-month club. Armored Core: Last Raven does nothing to bring new players into the fray, and instead plays directly to its established fan base by offering the same complex and unrelentingly difficult gameplay that the series is known for. That's just fine for AC vets, but for everyone else, it's a tedious and frustrating experience that should be avoided by all but the most iron-willed newcomers.

Last Raven has a thin story, but it works for a game about mech warfare. The world has been all but destroyed by unmanned weapons gone haywire. In the aftermath, three of the world's largest corporations get together to form the Alliance, which is intended to serve as a governing body of sorts. Of course, there are some people who have a problem with the corporations take over, so they get together and form a rebel group known as Vertex. The two groups duke it out, and although the Alliance has the benefit of near-endless resources, the Vertex grow stronger each day as more and more people join the fight against the corporations. One day out of the blue, the Vertex show up and declare that the final attack will commence in 24 hours and will decide once and for all who rules the world. It sounds exciting, and indeed it's a fine setup for this type of game, but it's presented in the most dry, uninteresting fashion. Even though this huge battle will supposedly happen in 24 hours, there's no sense of urgency or even importance to what you're doing in the game. Instead, all the information is conveyed through volumes of text in the form of e-mails and reports that you can access between missions. There are a few cutscenes, and some very slight character development, but for the most part, the story in the game is just window dressing.

When you start off, you're given a basic AC and a bit of cash. You're basically let loose to do whatever you want. You can spend some money to purchase new parts for your AC, go take on missions to earn money and advance the story, or go battle other AC units in the VR arena to earn money. No matter what you do, you'll have to have the right AC for the job, which means that you'll be spending most of your time arranging and tuning parts to achieve the always-elusive balance of performance and power.

There are literally thousands of different AC configurations available to you in the game. You can purchase parts in the shop or find them on the battlefield during missions. There are hundreds of different parts in the game, from heads and legs to guns and radar systems, and everything in between. Each part has alphabetical performance ratings, and many parts can be fine-tuned to enhance specific aspects of their performance. Once you combine all those parts to create an AC, you get an overall rating on a scale from E to S. There's no guide or template to help you create the coveted S-ranked AC, so you basically have to experiment to see which combinations work best. With so many different combinations, this trial-and-error process can be extremely intensive and tedious. Since each mission has you facing different enemies and conditions, you'll usually have to completely rebuild your AC every time you fight. You can conveniently save up to five AC setups in your garage, but it still feels like a lot of work to constantly build, test, and rebuild your AC.

The missions in the game are all short and straightforward, but they're exceedingly difficult. You're usually presented with two or three missions to choose from, depending on whether you want to help out the Alliance or the Vertex. Depending on which mission you complete, you'll earn money and a new set of missions will be opened up. There are six different endings, with the one you get depending on the path you take through the game.

Some of the missions have you moving through a level destroying all the enemies that get in your way, some are escort or defense missions, and some require you to destroy an enemy AC in a one-on-one battle. The one-on-one missions are invariably the most difficult ones in the game, because you first have to figure out your opponent's attacks, then die and go tune your AC to account for your opponent's strengths and weaknesses, then attempt the battle again--usually several times. That doesn't always work, though, because although the other AC units always have the same configuration, they'll use different techniques depending on how you have your AC set up. You can easily be destroyed in less than a minute, but if you move around a lot and manage to avoid taking too much direct fire, you can run your enemy out of ammo and then move in for a kill. Even then, your enemy will just hop all over the place, making it extremely difficult to attack with any degree of accuracy, especially if you happen to have a slower AC or a weapon with a slow rate of fire. It can be satisfying to finally find a well-balanced configuration, because the changes you make to your AC all have very apparent effects on the battles. However, it's still an extremely tiresome process to get to that point, and even then the battles just aren't very fun.

Part of that is a result of the frustrating controls in the game. There are two control configurations to choose from, but neither one makes it any easier to move and attack effectively. You can choose to play with the standard Armored Core controls, using the D pad to move around, shoulder buttons to aim, and face buttons to attack. It's an extremely unintuitive control scheme that demands a lot of practice and patience. It's also not very precise and doesn't allow for fast enough responses to be useful in battle. The second control scheme mimics that of a standard first-person shooter, using the left analog stick to move the AC around, the right stick to aim, and the shoulder buttons to fire. This control scheme is slightly more usable, but the aiming and movement of the AC units is still too slow and clunky to keep up in battle.

When you aren't getting blown to smithereens in the story missions, you can do so in the VR arena. The VR arena lets you make wagers and battle one-on-one against other AC units to win money. There are 30 battles against a wide variety of opponents. These battles can be extremely difficult and require extensive tuning of your own AC just to survive. They aren't exactly necessary, but being that the story missions are so difficult, you'll appreciate the extra cash to outfit your AC with better equipment.

There's also a versus mode in Last Raven that lets you play against up to three other computer-controlled or human opponents. There are more than 25 different arenas to choose from, and you can duke it out in a free-for-all or team-based battle. If you have some like-minded friends, you'll probably have fun battling it out with your customized mechs, but beyond that, versus mode doesn't have much to offer.

The presentation in Armored Core: Last Raven is no different than it has been for the past few years. The AC units themselves look blocky and dull, despite the detail of the many component parts. The weapons feel extremely weak, with missiles that look and sound like bottle rockets, silent and slow-moving lasers, and giant guns that might as well be pea-shooters. The explosions and other effects are all subdued and unexciting, both visually and aurally. The environments are vacant and colorless, and even though many seem to stretch off into the distance, you'll automatically forfeit if you move beyond the invisible barrier of each level. The voice acting and music are minimal and fit with the rest of the presentation, in that they're generally unremarkable.

It's difficult not to be impressed on some level with the sheer amount of content available in Armored Core. The problem is that most of the game feels too much like work, with the heavy emphasis on repetitive trial-and-error tuning processes and difficult, boring battles. If you've played the previous games in the series, you'll be right at home here, but you won't find much of anything new or different. If you've never played an Armored Core game, this isn't the place to start. 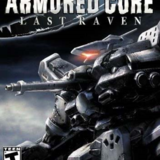