Armikrog's opening moments hold the promise of a grand adventure: an eclectic ballad kicks it off, introducing you to its lore with eccentric vocals and melodies. The first cutscene shows an exciting emergency crash landing onto a mysterious planet, showcasing the game's unique claymation visual style. Unfortunately, as your adventure continues, your excitement gives way to disappointment. What you find is an experience plagued by underdeveloped characters, bland sound design, and uneven puzzles. Even though the game's visuals and solid point-and-click mechanics elevates the experience on occasion, Armikrog ultimately feels lackluster, and devoid of the personality that made the opening so captivating.

Armikrog is visually striking. Everything in the game is sculpted from clay, and as a result it has a distinct handcrafted style that’s imprinted onto its world. From the human fingerprints that adorn each area's molded walls to the stop-motion flow of its protagonists' walking animation, there's a level of detail and painstaking labor that you can't help but admire. It's an endearing, refreshing change of pace from gaming’s typical polygonal or pixelated worlds.

The game tells the story of space explorer Tommynaut and his talking dog Beak-Beak as they embark on a mission to save their dying planet by obtaining a rare energy resource located on a nearby planet called Spiro 5. But when a sudden malfunction plummets their spaceship onto Spiro 5's dangerous surface, they're forced to take refuge in a nearby fortress.

With the exception of a few well-animated cutscenes, Armikrog's story exists in the periphery. You're left to figure things out through vague narrative details found in the environment. Commentary from Tommynaut and Beak-Beak offers insight into the events at hand, but it’s nothing detailed or substantial. These qualities create a sense of wonder and discovery in Armikrog's narrative during its beginning.

While the wonder of Armikrog's narrative is captivating at first, its overall execution is lacking. The main problem stems from how underdeveloped its major characters are. When Tommynaut and Beak-Beak are introduced, they're depicted as vibrant personalities with a clear comedic dynamic. An early exchange between the two, commenting on their damaged ship's insurance and high deductible, alludes to a history that's amusing to hear. But scarce development of details like this throughout the game makes it difficult to care about them in their adventure.

There also isn't much to Tommynaut and Beak-Beak outside of their motivation to save their planet. There's no dramatic arc that ensues to challenge them; they simply remain the same throughout the entire game. Occasional dialogue between the two tries to reinforce the nature of their relationship, but these moments are so few that anytime they do happen, it's forced and disjointed. Other characters are also subject to this problem, such as the game's main villain, who receives so little build-up and development that his unveiling lacks significance. With no character development to accompany the game's plot, Armikrog' story comes across as flat and empty.

This emptiness also afflicts Armikrog's sound design. Background music is randomized, with a collection of tracks that play upon entering different areas. But a majority of the songs it cycles through are a majority of ambient tracks that verge on silence. On paper, this approach sounds like it could enhance the mood, but the songs are so devoid of any presence or memorable atmosphere that the game is made to feel dull and awkward. It's a shame because when the other more eccentric musical tracks play, they give the game an added personality that’s a joy to experience in conjunction with the claymation visuals.

Armikrog’s gameplay holds up marginally better in comparison. As a point-and-click adventure, its streamlined mechanics utilize a one-click-does-all approach. You click on objects to interact with them, and when you have the proper item in your inventory, it'll automatically combine it with the desired point of interest. This makes puzzle solving straightforward and approachable.

That isn’t to say the game's puzzles aren’t challenging or mentally stimulating. One in particular had me gathering vague hints from ant-like creatures that, when deciphered together, revealed the instructions needed to fire a cannon. Another involved using Beak-Beak--who you can switch to at any time--to sit on switches to clear a path for Tommynaut, who needed to maneuver a large object through the environment. While puzzles like these are engaging, a large chunk of Armikrog’s other puzzles are repetitive, with most involving finding a lever to activate a machine, sliding tiles on a mechanism to open a door, or finding an item to turn on a power supply.

Puzzles also suffer from being too ambiguous or nonsensical. A late game puzzle required me to correctly align slides with various robot parts pictured on them in order to activate a catapult that could knock down a block I could use to cross into the next area. The solution called for arranging the slides in a special order, but the hints the game provided were so vague that I needed to use a significant amount of guesswork to solve it. Moments like this happen often in Armikrog, and it's here when puzzles are at their worst, as they devolve into tedious fiddling of components until you trigger a solution.

Though it starts with a glimmer of excellence, Armikrog's luster fades over time. It inevitably feels empty, falling flat in its effort to develop its characters, fill out its world with compelling atmosphere, and provide consistent puzzles with sound logic. While the game's claymation visuals are delightful and unique, that quality alone isn't enough to make it worth recommending. What remains is a half-baked experience that, for all the personality it wears on its sleeve, fails to captivate in any meaningful way.

View Comments (23)
Back To Top
5
Mediocre
About GameSpot Reviews 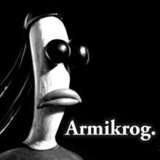 Matt Espineli loves point-and-click adventures and enjoyed playing with Play-Doh as a child. He always found The Neverhood charming and was hoping to feel the same about Armikrog.