ArmA is a challenging and immersive game of modern warfare, but one packed with plenty of frustrating moments and flaws, as well.

Let's point out the obvious, first. Yes, ArmA: Combat Operations is a very weird name. Short for "Armed Assault" (which would have made an infinitely better title), it's much easier to think of ArmA as the spiritual sequel to 2001's critically acclaimed Operation Flashpoint: Cold War Crisis, an innovative military-themed game that's as much simulation as it is shooter. That's because ArmA is the product of Bohemia Interactive, the European developer responsible for Operation Flashpoint. Save for a different name and a different setting, the gameplay in ArmA is unmistakably that of Flashpoint. And that pretty much sums up what's both good and bad about it.

The things that set ArmA apart from the rest of the crowded military first-person shooter field are the same things that set Flashpoint apart from this pack. There's a feeling of verisimilitude in ArmA that you don't get in most shooters, and that's due to the way that Bohemia Interactive approaches the game. Instead of putting you in a relatively small environment or holding your hand while taking you on a heavily scripted rollercoaster of a ride like most shooters do, ArmA plops you down in the middle of a huge island that's 400 square kilometers in size. While individual missions won't require you to traverse the entire breadth of the island, you will still operate in huge patches of territory, and that really gives you the sense that you are in some real place, as opposed to being in the level of a game.

ArmA is set on the Atlantic island of Sahrani. Think of it as an allegory to South and North Korea, but on a much smaller scale. The Kingdom of South Sahrani is an ally of the West, and the United States has deployed a small US Army contingent there. The NDRS is a totalitarian regime armed with Warsaw Pact equipment and has a nasty habit of invading its southern neighbor. Of course, the North invades the South again, and you'll play from the perspective of the American side, trying to slow and then reverse the invasion. This means that you'll participate in large-scale battles on foot and in a variety of vehicles, as well as volunteer for numerous side missions that require stealth or speed.

The campaign, told through some surprisingly well-done voice-overs narrating otherwise low-budget cutscenes, does feature some nice twists to it. There are basically two kinds of missions in ArmA: primary and auxiliary. The former are required to progress the story forward, while the latter are completely optional and can make your life a bit easier. For instance, if the main mission is a defensive one where you have to stop a big assault, you can even the odds a bit by conducting an auxiliary mission beforehand. This can involve sneaking behind enemy lines to assassinate a key enemy officer or ambush enemy convoys en route to the battle. This provides plenty of gameplay variety, as you can experience the wide range of modern-day military operations, though the downside is that these auxiliary missions can be so brutally difficult that they're often worth skipping, but more on this a bit later.

There are moments that happen in ArmA that are possible only due to the game's scale. You can be crouched on a hill, overlooking a vast valley, and watch enemy soldiers and tanks maneuver several kilometers away. Engagement ranges are much more like they are in real life, as you're trying to nail a target that's a couple hundred meters away. Or, you can literally get lost in a big town, with the crack of assault rifles and the boom of tank cannons around you. Each noise can send you scurrying for cover. Sure, a lot of games have these kinds of immersive sound effects as well, but for the most part they're just general background noise. In ArmA, if you hear assault rifles in the distance, you know that there's actually a firefight going on nearby, and you can investigate or run away from it, if you want. It's amazing how immersive this game is. A perfect example of this is early on, when you're on Humvee patrol and rolling through the countryside and towns of South Sahrani, only to be ambushed. The transition from tranquility to war is jarring, and experiencing it feels like watching news footage or a documentary movie.

ArmA isn't just a sophisticated first-person shooter, either, as you can command squads of infantry and vehicles. Waging a firefight and commanding your squad at the same time is awkward, though, as there are a mess of commands that you have to master. Even the act of shooting your rifle is not as intuitive as in most games because various controls are scattered all over the keyboard. When you're not running around on foot, you can be riding around in style, as you can jump into pretty much any vehicle in the game as a driver or a passenger. This includes civilian cars, Humvees, armored personnel carriers, tanks, helicopters, and even aircraft. The freedom to tear around the roads in an armored column or soar above in a Black Hawk is impressive, but the price of this is an overly complex control scheme and some very loose physics modeling.

All of this can be said about Operation Flashpoint, as well. And that's the problem, because there's very little evolution on display, not only in gameplay but also in technical terms. The jerky animations, the bumbling artificial intelligence, the stilted manner soldiers talk to one another (as if they were automated voice machines and not human beings), and the overly complicated controls from Operation Flashpoint are all here. While annoying back in 2001, these flaws are glaring in 2007, as technology, expectations, and competition have risen considerably since then. Watching your elite troops run around in a circle or get confused when trying to pass another vehicle on the road can ruin the illusion that the game works hard at establishing.

It also doesn't help that ArmA can be brutally frustrating, even at the easier difficulty setting. A successful mission is hard won in this game, as it most probably required numerous attempts and lots of teeth gnashing. Thankfully, the easier difficulty setting lets you save the game as much as you want, which is a huge improvement over Operation Flashpoint's one save per level. But even then you've occasionally got to overcome ridiculously difficult mission objectives, compounded by the fact that combat is so unforgiving that a single bullet can, and often will, ruin your day. It's so frustrating that it's far easier to simply skip the optional missions, as many of those have you venturing solo against difficult odds. What the game desperately needs is a much easier difficulty setting that's a lot more forgiving to new players and those learning the game, while those who want the realistic challenge can stick with the one-shot, one-kill gameplay.

At least ArmA's multiplayer component is both extensive and impressive. You can participate in a wide range of matches online, ranging from cooperative battles against computer opponents to team battles. There is a big hitch to things right now, though. Currently, North American and European players are playing on different versions of the game, which means that finding a match can be difficult due to version incompatibilities. That should change over the coming weeks and months because future versions of the game should let players everywhere sync together. Still, being in a cooperative game and relying on smart teammates as opposed to easily confused AI makes a huge difference, as players can really cooperate and coordinate with one another to feel like a well-oiled military machine. There's even a ranking system that allows veterans to use the more advanced vehicles, as well as a mission editor that lets you create your own custom missions. With that said, ArmA has a lot more competition in the multiplayer realm than Operation Flashpoint did, and ArmA's highly realistic gameplay may prove glacial to those that were weaned on the run-and-gun, over-the-top action of Battlefield 2.

The graphics engine doesn't feel all that different from Operation Flashpoint's. The main improvements come in the form of higher resolutions and sharper textures, but the underlying foundation remains pretty much the same. The result is a game that's nowhere near as impressive or as advanced as its competitors, but then again, those games don't attempt to create worlds anywhere near as large or as impressive as ArmA's. It helps to boost the graphics settings to maximum, though with everything maxed out, the frame rate still suffers on a fairly high-end system.

ArmA is a game that delivers mixed reactions because there are flashes of brilliance here, along with plenty of frustration. This is a game that appeals to those who like highly realistic simulations or difficult challenges--or to those with plenty of patience. But if you're looking for adrenaline thrills, you should look elsewhere. Bohemia Interactive should be commended for developing a shooter that's unlike almost anything out there, but at the same time, the company should have evolved the game to keep up with the times. 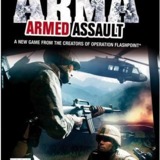 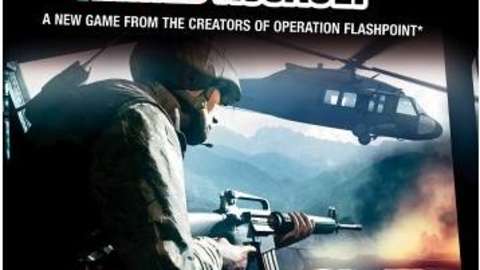 In Armed Assault, you must fight in modern battlefields with a variety of vehicles and equipment. This first-person shooter features multiplayer modes, a mission editor, and more.