There's no denying the kind of quirky, addictive charm that Mercury's gameplay has to offer.

Who knew that transition metals could be so much fun? Apparently, Archer MacLean did. Known mostly for his work on billiards games of varying degrees of notoriety, MacLean (and his team Awesome Studios) has branched out into the world of handheld puzzle games with Archer MacLean's Mercury. It's sort of a Marble Madness or Super Monkey Ball-esque puzzler that replaces your typical sphere with a blob of mercury. Conceptually, Mercury is certainly a strange one, but the way in which the game presents its gelatinous centerpiece and allows you to twist it to fit its wide array of crazy obstacles and traps is really something else. And while Mercury may prove a bit too esoteric and periodically infuriating to be appealing to just anybody, you can't help but appreciate what this game manages to pull off.

At first, Mercury seems like it would have all the makings of a neat tech demo, but not much more. You're presented with a blob of mercury (or, in some cases, multiple blobs), and you'll tilt the platform on which it sits in any direction via the PSP's analog disc. The game starts with only one available "world" unlocked. This world consists of a number of tutorial stages where you can learn about the various pitfalls and obstacles you'll encounter while playing. Stages themselves are armed with a wide variety of crazy contraptions, like moving platforms, conveyor belts, launch pads, jagged corners that split your blob into multiple pieces, and even electric bolts and evil little gremlin spheres that take away some of your blob's mass. The basic objective of each level is usually to light up a series of switches, or even just get to one switch at the end. However, how you get from beginning to end often requires quite a bit of concentration, skill, and luck.

There are really only a few specific types of objectives you'll have to meet to beat a given stage. Either you'll have to get a certain percentage of your original blob to the end of a level, light up a specific number of colored switches by turning your blob each of the required colors (via little color-changing stations scattered about a stage, or in some cases simply by mixing two colored blobs into one), or a combination of both. You'll always be under a time limit, so you can't just sit around trying to plot out your next move. This can be a bit of a hassle when you're first learning a level, because the game never does a remarkable job of showing you what to do before you're dropped into a stage. Apart from a quick spinning camera shot of the stage, you don't often get to see what obstacles will be coming your way, meaning you'll find yourself dealing with a fair amount of trial and error. However, the trial and error isn't really that bad, since you'll inevitably have fun practicing each stage and trying to figure out all the little quirks and possible paths that will lead to the conclusion. The bonus of the time limit is that it keeps the pace of the game brisk, without just blatantly rushing you through each stage.

A game like this wouldn't be worth anything if it didn't control well, and thankfully, Mercury handles nicely. The analog control can be a bit touchy in certain situations, but for the most part, you can easily tilt the world around without losing control of your blob. The blob itself moves around in what feels like a very realistic fashion, so it'll split up when stretched too thin, reassemble itself when squeezed together, and just generally move around like the blob that it's supposed to be--and it actually looks pretty impressive doing it. Though occasionally it is possible to lose track of where your blob is going, there are enough variable camera angles in the game to allow you to pretty much see what you're doing at all times. The one issue is that when you get multiple blobs going, if they spread too far apart from one another, the camera will simply zoom out as far as possible, which in some cases can be quite far. Perhaps a little picture-in-picture window might have been a better solution. But, as it is, the camera zoom isn't too terrible.

With six main worlds (along with an unlockable bonus world) and 72 stages to play through, Mercury features quite a bit of gameplay, especially when you consider how crazy a lot of the later worlds get. The first handful of stages are an absolute breeze, but that breeze quickly turns into a gale-force wind that is working against you by the time you get deep into the second world. The game is by no means impossible, even at its most difficult, but the scaling of the difficulty might seem a bit much at first, as the game pretty much throws you off the deep end almost immediately after you've completed the idiotically simple tutorial.

It's not hard to imagine this kind of crazy spike in difficulty scaring off some players, especially when you go from simply having to navigate a single blob of mercury through a few color stations and past a couple of moving platforms, right into having to move three independent blobs from one end of a stage to the other, trying to keep them all together, yet not mixing any of them up (so you don't inadvertently change their color). And, you have to do it all while keeping a fairly high percentage of your overall mercury from falling off the edge of the stage, even though you're having to constantly tilt the stage back and forth over and over again while you're seemingly always teetering on the edge of oblivion. While that may have been a rather long-winded way to say "the game gets really, really hard, really, really fast," you probably have a better idea now of what you'll be up against. Thankfully, if you're willing to stick it out, you'll find the game very rewarding as you master each challenge.

Much of Mercury's replay value comes from its single-player content. Though there's no free-play mode to speak of, you can replay any of the stages you've unlocked and try to compete for higher scores. There's also a ghost race mode where you can try to compete against your own times, as well as a two-player Wi-Fi multiplayer mode that, unfortunately, is basically the same thing as the ghost mode. A more fleshed-out, unique spin on the single-player could have made for a very cool multiplayer experience in Mercury. But as it stands, all you really get to do is race against a ghost version of your opponent's blob. Sadly, it's really not all that interesting.

Mercury mostly presents itself quite nicely, if a bit simplistically. As mentioned before, the highlight of the graphics is the mercury itself and how it moves so realistically. It's almost kind of hypnotic watching that blob move around a level. The level designs in the game are at times quite elaborate and labyrinthine, though never highly detailed or filled with graphical fluff. Then again, for what they need to be, the basic graphics of the game are perfectly fine, save for a couple of issues with frame rate drop here and there. The audio mostly just consists of the gooey sounds of your mercury slopping around, as well as some decent backbeats to tap your fingers to. None of it is spectacular, but, like the graphics, the audio serves its purpose well.

Ultimately, Mercury is a very good puzzle game that mostly lives up to the strengths of its concept. There are certainly some legitimate gripes to be lobbied against the game's sometimes exclusionary difficulty level and lack of truly engaging multiplayer. But regardless of these issues, there's no denying the kind of quirky, addictive charm that Mercury's gameplay has to offer. For PSP puzzle fans on the hunt for another game to complement their current Lumines addiction, Mercury is a solid choice. 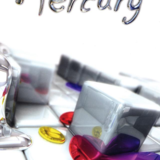