All in all, the developers really wasted Bruce Willis' talents and missed an opportunity to do something extremely cool.

Apocalypse is an ambitious project. Activision set out to make a shooter with a very action movie-like quality. Figuring that they'd need a big action-movie guy involved to really make it fly, they got Bruce Willis on board. His face was scanned, and his voice was recorded for the project, the theory being that Bruce would star "in" the game. The original plan was to have Bruce play your sidekick, a guy that would run around and back you up while you shot up the place. But as the development time dragged on, the conclusion was drawn that people don't want to be alongside Bruce. People wanted to be Bruce. So the sidekick idea was scrapped, and instead you take on the role of Trey Kincaid, scientist-turned-outlaw.

The game's changed perspective may have been a good idea at the time, but it also caused the game's main problem. Since all the voice work was written to work with Trey as your sidekick, it all sounds like he's talking to someone that isn't there. Plus, what was left in really isn't very good. Most of the phrases really lack feeling, and they're mixed horribly. It sounds like they just trapped Bruce in a bathroom with a mini-tape recorder and got him to read the script. Also, the lack of variety (you'll hear "Open up a can of whoop-ass" and "Ooh! I... feel... gooood!" more than a few times) leads you to believe that most of the voice work was unsuitable after the transition. And since getting Bruce back in the studio was probably impossible (hey, Bruce is a busy guy), we're left with whatever quotes they could salvage from the existing audio.

The gameplay is surprisingly fun for a shooter of this type. The controls are set up in a Robotron or Smash TV-like setting (analog is a must here), but the game has a running and jumping atmosphere more along the lines of ASC Games' One. For a 3D game with a lot of jumping, the camera does a pretty nice job of presenting the action in an easily viewable fashion. But it isn't perfect. The White House level is the biggest offender. The perspective gets in the way of your jumping quite a few times in that level, causing more than a few deaths when you think you're judging the distance properly but miss a platform by a long shot and die in the lava. But overall, the gameplay is really intense, although the game as a whole is really quite easy. The last two levels of the game are reasonably challenging, though.The game has got a nice graphical look to it, with occasional panning cameras and nice perspective changes. It really gives the game a very dynamic feel. The game's frame rate tends to fluctuate a little bit, but it remains fast enough throughout the game, right up until the final boss. The final boss stage has some serious slowdown problems, which in turn cause some poorly judged jumps, which in turn cause needless (not to mention extremely annoying) deaths.

Other than the poorly executed Bruce Willis speech, the game's sound is nice. The fire and explosions give the game the feeling of a real battlefield. The whoosh of the flamethrower is especially nice. The music is also well done, including a track by Poe (that's how long this game has been in development. When they first announced Poe's involvement, it was a reasonably big deal), who also plays the part of Plague in the game.

Overall, Apocalypse is a really fun shooter with a great concept, but portions of it are poorly executed. All in all, the developers really wasted Bruce Willis' talents and missed an opportunity to do something extremely cool. If they had set out from the beginning to make Apocalypse a one-man game, none of the major problems with the fragmented storyline and poor speech would even exist. 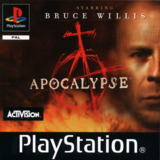 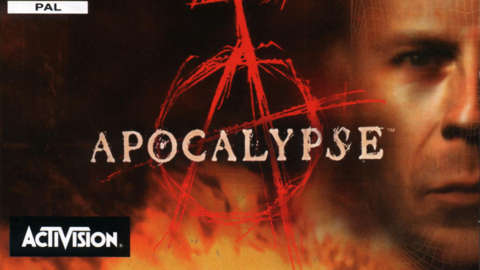 All in all, the developers really wasted Bruce Willis' talents and missed an opportunity to do something extremely cool.