Another Code R: A Journey Into Lost Memories Review

Another Code R is a pleasing adventure with a good story, but slow pacing, frustrating motion puzzles, and overwrought dialogue spoil it.

When Another Code: Two Memories (Trace Memory in the US) was released on the Nintendo DS back in 2005, it put Nintendo's then-fledgling handheld to work in some pleasingly inventive ways while telling an interesting story. Sadly its Wii-exclusive sequel, Another Code R: A Journey Into Lost Memories, isn't nearly as innovative and, though it's beautifully presented, moves at such a glacial pace that only the most hardened adventurers will see it through.

Set two years after the events of Two Memories, Another Code R's story once again revolves around heroine Ashley Mizuki Robbins. Ashley, now aged 16, journeys to Lake Juliet to visit her father, whom she rescued from Blood Edward Island in the first game. Upon arrival, Ashley's dormant memories soon spring back to life, and you must uncover the mysteries surrounding her mother's death and find the truth behind Project Another.

Another Code R plays much like a traditional 2D point-and-click adventure, but its characters and backgrounds are rendered in 3D. The game has a logical and intuitive interface: Ashley is always kept at the centre of the screen, and you can move her by pointing at arrows at the side of the screen or by using the D pad on the Wii Remote. Indoor exploration is equally intuitive: the same arrows at the sides of the screen allow you to look around the room, while items that are of interest turn yellow when the pointer hovers over them. However, Ashley picks up items only once they become useful in the game; there isn't an option to collect things to use later. This becomes irritating as the game progresses because you have to go back to find items that Ashley couldn't pick up the first time round.

That's not to say that the puzzles in Code R are taxing. Most of them rely on general observation rather than idiosyncratic item combinations. Items needed to solve a puzzle can usually be found in the same room and often need to be used directly with just one other item in order for you to progress. There are also some great puzzles that make use of the remote's motion sensor in clever ways. Some are as simple as pulling a lever by moving the controller down, or swilling around test tubes by shaking the remote. However, towards the latter half of the game, trickier motion puzzles are introduced, a few of which require inputs that don't always register correctly. Progressing past these puzzles tests your patience more than your spatial awareness, and while the problem isn't widespread, "solving" puzzles by randomly flailing the remote around in the air until something clicks is frustrating rather than rewarding.

Scattered around Lake Juliet are a host of colourful characters to interact with, and they're often vital for offering up clues to solve the story. Conversations are purely text based, but they're mostly one-way and incredibly long. You can sometimes ask a question, but it's usually just the option to repeat the last sentence rephrased as a question. On some occasions you get more than one option, but regardless of the order in which you ask the questions, the outcome is the same and doesn't affect the plot in any meaningful way.

The story and characters are entertaining, and there are a multitude of different mysteries to solve while you work your way to the end of the story. Is the clock tower haunted? Who is that crazy old woman? And why is that dog always nearby? The problem is, it takes ages to get to the interesting stuff. You'll spend the first three hours of the game doing mundane things like running around finding a bag of charcoal for the BBQ, and it's not until halfway through the game--after about 10 hours--that you get something interesting to do. The dialogue is also exceptionally wordy, and a simple conversation with a character can last for for what seems like an eternity, even though the character may have answered your question in the first sentence. This wordiness is exacerbated by the slow pace of the first half of the game, though the dialogue does get more interesting later as the pace picks up.

On the plus side, at least you have plenty of pretty environments to look at while you're reading the lengthy dialogue. Another Code R is beautifully presented, with an art style that's reminiscent of a watercolour painting. The visuals are a definite success in terms of scenery, particularly the lake and surrounding trees, which look like they've come straight off an artist's canvas. The characters also have a great art style. The use of cell shading works well, and there's a surprising amount of detail on each character. The soundtrack works well and has plenty of variety, ranging from slow classical scores to guitar-led rockabilly. Each piece of music is perfectly suited to the differing backdrops and areas around the lake and helps add to the atmosphere.

Another Code R serves up a decent adventure, with some well-thought-out puzzles and an interesting mystery storyline. However, the slow pace, the overwrought dialogue, and some frustrating motion puzzles take the shine off what would otherwise be a good game. 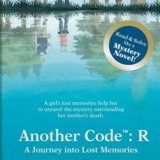 Another Code: R - A Journey into Lost Memories
Follow