There are many different creative tricks game developers use to add spice into well-worn genres to keep them feeling fresh, but sometimes, it's the simplest and least-expected ideas that yield the most alluring fruit. 11 Bit Studio takes traditional tower defense gameplay and turns it inside out by putting you on the offensive in Anomaly: Warzone Earth. Leading a convoy of high-tech military vehicles through the mazelike streets of a postapocalyptic Baghdad to infiltrate a giant energy dome and take down heavily entrenched alien forces is an enthralling exercise in combat strategy and quick thinking. The need to continually plot pathways, adapt to new adversaries, and lay down a constant stream of support power-ups to keep your convoy from being annihilated is thrilling stuff.

The action gets off to a weird start, thanks to an outlandish plot setup, but everything soon settles into a steady groove. Mysterious alien invaders have landed in Baghdad and Tokyo, erecting force fields around both cities and digging in for a hard fight. As the head of an armored military column, your mission is to find a way to break through the energy barriers, battle your way to their core, and shut down your extraterrestrial foes before they can wipe out the entire planet. This requires shoehorning your forces through heavily fortified enemy positions with a limited amount of funds and units available for resupply. However, Anomaly's creative take on tower defense goes well beyond a mere role reversal in the combat department. Instead of having direct control over your convoy's armored vehicle units, you plot a course for them on a strategic map and let 'em rip.

While they're slowly traveling along the path, blasting at any foes within weapons range, you get to run around on foot to scout ahead, distract enemy turrets, and deploy weapons power-ups to keep them safe. Additionally, you can bring up a tactical map screen at any point to adjust the travel route of your convoy on the fly or scope out the action ahead to concoct an appropriate battle plan. The entire game is played with the mouse, which makes it easy to manage your team amidst eruptions of chaotic combat. Having to balance fluctuating attack plans with the need to defend your own convoy keeps things moving at a brisk pace.

Despite his tiny, vulnerable size, your command character has some neat tricks at his disposal, like laying down a smoke screen, repairing units, dropping nukes, or making your convoy temporarily invisible to the enemy. Each of these area-of-effect abilities is only triggered for a short time, and the way you deploy them is often more important than the actual makeup of your squad. Destroying enemy defenses often triggers an item drop and adds cash resources to your pool. This frequently makes it necessary to plot multiple routes to clear out pockets of alien scum to boost the power and size of your convoy. However, throwing your convoy at the enemy without some forethought is a quick way to get wiped off the map. There's a lot of strategic flexibility in how you choose to deck out your convoy in most missions. A mix of tanks, armored personnel carriers, rocket-launching robots, shield-generator drones, and other special vehicles can be purchased and upgraded. Selecting their positions in the convoy lineup can also make a huge difference in the outcome of battle.

Anomaly's two main city backdrops are lush settings that brim with devastation and subtle visual flourishes. You muscle your troops through a variety of gorgeously decimated locales, such as gutted buildings, winding streets lined with cracked concrete and abandoned cars, and rippling waterways cluttered with derelict ships. The game's varied missions change as frequently as the scenery. Most have you working to get your convoy to the safety zone intact, though additional objectives are woven in at almost every stage. Protecting a flying aircraft from the ground, taking down special targets that use your abilities against you, and working with a limited spread of units are among the more challenging twists. The gameplay rarely gets repetitive. Even with only about a dozen stages, the main campaign is lengthy enough to keep you engaged for a good amount of time. Two additional modes are unlocked as you progress through the campaign, and each delivers a variation on the intense action. Baghdad Mayhem mode has you working to quickly destroy heavily fortified enemy power generators within a set time limit, while Tokyo Raid sends you battling across 18 island maps to destroy your adversaries. These extra modes round out the campaign, offering more of the same enticing action found in the main game without all of the story elements.

Anomaly: Warzone Earth's fresh perspective on the traditional tower defense setup makes for an exciting new entry in the genre, exploring familiar gameplay from an entirely different angle makes the action in Anomaly: Warzone Earth even more exciting. It's surprising how much of a difference a few simple tweaks can make toward revitalizing a genre that has long grown stale for some players. Being able to think strategically while under fire is a must in Anomaly: Warzone Earth, and the many twists that pop up along the winding road to victory make this game a winner. 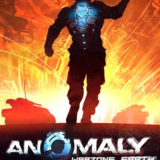