Anodyne is an enjoyable top-down dungeon crawler that's weak on story but strong on ambience.

Few games spend as little time hiding their inspirations as Sean Hogan and Jonathan Kittaka's Anodyne. Mere minutes in, you can see its obvious debts to The Legend of Zelda: Link's Awakening in the design of the trees that adorn the top-down environment, though it adds contrast by way of hefty helpings of surreal encounters and disturbing imagery. Ultimately, it emerges as a memorable game in its own right, even if it struggles at times to overcome the limitations of its own ambition.

That ambition manifests itself most prominently in the seven or so hours of disjointed narrative, which hints at our reluctantly changing relationships with gaming concepts as we age. More to the point, subtle hints littered throughout the narrative suggest that the protagonist is using gaming as an anodyne (or painkiller) for his emotional suffering. Here we find no quasi-elven protagonists in the vein of Link; in their place, we're presented with a white-haired fellow with the perhaps symbolic name of Young, whose Coke-bottle glasses serve as his only possession remotely resembling a shield and who uses a prosaic broom in place of a sword. The action takes place entirely in his unconscious mind--Young is a closer relative of Braid's Tim than of Zelda's Link. Gone, too, is the simplicity of a story that focuses on saving a princess; in its place, we're left with an unfocused story about saving the world that transpires through fragments of Young's dreams.

Young's struggle to enjoy the classic dungeon-crawling role-playing game that unfolds around him is never so apparent as in the many moments when flashbacks from "real life," as it were, butt into the gameplay. Young may spend several hours swatting bats and energy-belching frogs with his broom amid fantasyscapes and postapocalyptic freeway ruins, but we find him most haunted by memories depicted in fractured vignettes that reference family struggles and the pain of leaving home. At times, such as when Young tries to converse with a fisherman only to push him to his death in a whirlpool or when he encounters a strange man muttering incoherently, Anodyne assumes an air better suited to horror than to lighthearted action adventure. This isn't the first instance of developers using retro environments normally associated with 16-bit fun to explore darker themes--the first Corpse Party, for instance, used it to greater effect--but Hogan and Kittaka effectively use the contrast to tackle lightweight philosophical questions.

Indeed, these moments are the backbone of Anodyne's appeal. As it is, the promising ideas of the thin narrative's first couple of hours lose their power long before the end, and the haunting vignettes themselves devolve into a heap of broken images increasingly bereft of meaning. In its worst moments, it becomes pretentious nonsense.

The combat excels in a simplistic Zelda-circa-1991 way thanks to commendable hit detection and a wealth of simple but satisfying single-screen puzzles, but the core gameplay never advances far past Young's basic broom swatting, which you encounter within the first few minutes, despite three upgrades. Later on, a rapid succession of often frustrating jumping puzzles feels forced and ill-suited to the top-down design, and the absence of a means of playing with a gamepad is disappointing in light of Anodyne's obvious affection for early consoles.

Still, if you take the time to explore all of Anodyne's nooks and crannies, you'll find hours and hours of gameplay in store. The problem is that much of this exploration centers on the careful and necessary hunt for 50 collectible cards that serve as the keys for new content all the way up until the final boss, and the ages' worth of backtracking involved at times feels like an artificial means of extending the running time. Many cards drop from the fun but generally easy dungeon bosses, but finding other cards involves performing maddening jumping puzzles and retracing your steps throughout an entire zone in search of the single chest you missed. A system of warp portals makes this process easier than it could have been, but the whole concept ends up feeling like exploration for the sake of exploration rather than the hunt for gear upgrades that makes Zelda games so memorable.

Anodyne rarely feels like a waste of your time despite these shortcomings. It makes up for the deficiencies of its narrative through the beautiful visuals you encounter as you trudge through everything from unsettling suburban neighborhoods to crumbling temples, and the poignant musical score surges with emotional power. At the most basic gameplay level, as you swat slimes and scoop up dust for use as a raft across bodies of water, it maintains a degree of fun. Above all, Anodyne never lets you forget that it's a game more concerned with the journey than with the destination, and at 10 bucks, it's a journey worth taking. 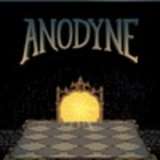