The sci-fi city building of Anno 2070 is a fresh take on a familiar genre. Expect to get hooked, and stay hooked.

With Anno 2070, a well-regarded series of strategic city builders goes rushing headlong into the future. No longer do you produce spices and dates, or ivory and jade. Such notions seem almost quaint in Anno 2070, where fancy health drinks and microchips are in high demand, and submarines scan for anomalies near underwater islands. The game's appealing futuristic vibe is apparent from the main menu screen, where you view the rotating Earth as if through a satellite feed, scan lines and static occasionally disrupting your view. But the joy goes far beyond the superficial. Anno 2070 is a detailed and daunting game that lures you in with its attractive trappings, and then hooks you with its interwoven social and economic structures. Sandbox urban planning and structured missions are combined effortlessly. It's a one-two punch of game addictiveness: "Slowly expand and improve my growing civilization" and "I'll do just one more quest before I turn in."

That addictiveness is further heightened by Anno 2070's persistent nature, in which a metagame of sorts keeps the rewards coming the more you play. Your main structure is the ark--a floating base from which your helpful AI companion intones advice and updates. You can upgrade the ark with various modules you earn, research, and purchase over time. Modules have a variety of effects: increase transport ships' cargo space, enable offshore windmills, and so forth, and once you find them, you get to keep them. Another metagame feature: when you log in to the game, you and other players might get an opportunity to vote for the faction leader of your choice, in an effort to reap the potential rewards he or she might offer. Note the "log in" part, however. To begin playing--and obviously, to participate in online features like voting--you must be connected to the Internet. You can continue playing a single-player game should you lose your connection, though that could cause you to lose your persistent ark upgrades.

The need to be online to start playing isn't ideal on those uncommon but annoying occasions when Ubisoft's servers shut you out. Whether or not you see the online persistence as a clever "gamification" of the Anno series or a veiled method of justifying stringent digital rights management, however, there's no denying that the city builder underneath is fun and rewarding even without all the metagame embellishments. You begin with your ark, a modest cargo ship, some currency, and the basic necessities for founding your first city. From your little harbor grows a metropolis, new buildings becoming available to you as you meet your population's evolving needs. They might want only fish and tea at first, but give them time, and they'll be whining for communication centers and fancy pasta dishes. And delivering the goods means exploiting the map, setting up trade routes, and sometimes even fending off the rivals who stand in your way.

It seems simple at first: place structures to get a supply of basic building materials flowing into your warehouses, keep everything connected with roads, and so forth. But before long, your list of considerations grows, and you must make crucial decisions on how to expand, what to purchase, and how to transfer the flow of goods. In Anno 2070, you don't need to manually set up transport routes between warehouses; once a resource makes its way into a warehouse, it's available in every warehouse on that island. Don't take that to mean this game feels dumbed down as a result. Once you expand to multiple islands, or even encounter other arks--whether they are controlled by the AI or by other players in online games--you can and should set up automated trade routes using any available vessels. If you're producing a superfluous amount of fish but constantly running low on tea, trading with others or redistributing these items across multiple islands can keep your income flowing.

Speaking of tea, your citizens drink a lot of it, though eventually, their tastes become more refined. But watch out: they might demand health food, which means you must grow both rice and vegetables. And thus you might have a problem on your hands, since the soil may not support those veggies. Or coffee. Or another supply you need. Solving such problems gets your creative juices flowing, for without that health food, you can't attract the next level of citizen. And without those citizens, you aren't getting cooler structures to play with, and your little empire grinds to a premature halt.

Not that everyone likes health food, though the game's Eco faction sure wolfs it down. The Tycoons, other playable faction, aren't so environmentally conscious, preferring champagne to biodrinks. There's an interesting dynamic here representing a very modern conflict: environmentalism versus industry. Depending on your own views, you might see the Ecos as green warriors or voodoo climatologists, but either way, Anno 2070 embraces the relationship between population, food supply, and pollution. The Tycoons aren't as concerned with protecting the ecology as are the Ecos, but both factions must monitor rising levels of environmental contamination, and each possesses a structure to purify the air. But these structures--like those that produce power--must be spaced out properly to maximize their effectiveness.

There's a third faction too: the Techs. The Techs aren't a fully playable faction but more of a supplemental one; allying with them unlocks key buildings like oil refineries and algae farms. And so an involving game becomes even more intriguing, because these structures must be constructed not above the sea, but underneath it. Taking your first submarine and plunging into the depths for the first time in a scenario is always a joy. Marine life glides past, and muffled gurgles give each dive an otherworldly aura. In addition to keeping goods from underwater bases flowing to mainland warehouses, you must also then manage the citizens of two factions at once, each with particular needs. It isn't just the sea that's deep--it's the entire game.

So it's involved, certainly, but is Anno 2070 fun? The answer is an emphatic yes, and not just due to the engrossing nature of the genre. Like in most such games, progress might be slow, though you can mitigate any lulls with the fast-forward key. But protracted downtime isn't that common thanks to occasional quests assigned to you. Missions involve rescuing stranded citizens, making special deliveries, and so forth, and the majority of them have a time limit. You'd do best to accomplish such tasks: not only might you earn a spiffy reward, but failure to achieve them could mean damaging your relationship with other ark captains. Not that Anno 2070's diplomacy system is particularly deep, but if you want to avoid war, you should try staying in everyone's good graces.

War may still come, though Anno 2070 is not a traditional real-time strategy game. You don't build elaborate armies, but rather create some air and naval units and click your way to triumph. Of course, even without big piles of intimidating war machines, this is a complex game, and newcomers need time to accustom themselves. The story campaign is a good place to start, because it gradually introduces new concepts and focuses on specific tasks until you're ready to manage your miniature empire on your own. Even then, learning Anno 2070 is not an effortless task. You may be asked to build a particular mine, but the structure won't appear on the build menu. As it turns out, it's organized as a substructure of another building, though the campaign might not spell out this information. Finding a certain building on an increasingly congested island can also be a chore when you desperately wish to manage a supply chain. Nevertheless, given the complexity of the game, interacting with Anno 2070 isn't overly bothersome, and once you get used to the way the build menu is organized, you may grow to appreciate how so many structures can be built with so few clicks.

Even genre veterans should take a peek at the story campaign, if only to immerse themselves in Anno 2070's futuristic atmosphere. After all, nothing says "science fiction" more than a rogue AI out to destroy its former masters. The tale's a bit campy--as is some of the voice acting--but the campiness provides welcome levity in a politically conscious game. Other production elements are decidedly more serious. Anno's synthesized warbles and orchestral riffs are alternately serene and stimulating, evoking thoughts of hi-tech expansion and computer-automated lifestyles. The fantastic visuals tie everything together; Eco cities lend an art deco sheen to the natural beauty of their surroundings, and the Tycoon areas darken that beauty with factories and distilleries.

The sci-fi ambience is a big part of Anno 2070's allure, and it goes a long way toward making the game feel fresh and surprising. An even bigger part of the allure is that Anno 2070 is what you make of it. If you want to chill out with some breezy city building without undue pressure, the easy difficulty setting is an inviting option. Once you get a number of ark upgrades, the hardest setting keeps your mental gears whirring and your clicking finger busy. No matter what your speed, Anno 2070 is addictive in the best way, by combining three brands of compelling design into one: intricate urban planning, time-sensitive questing, and persistent rewards for continued play. And that trifecta will keep you coming back for more.

View Comments (131)
Back To Top
8.5
Great
About GameSpot Reviews 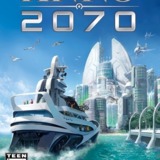