It's not quite the return of LucasArts-era cartoon adventures, but this cheerful game dishes out a lot of laughs.

In a lot of ways, Ankh feels like a lost game from LucasArts. This adventure from Deck 13 Interactive was clearly made to follow in the fine tradition of old-school LucasArts games like The Secret of Monkey Island and Sam & Max Hit the Road, which is to say that it's a lighthearted, kid-friendly romp that provides more than a few laughs while leaving your brain cells relatively untaxed.

Much of the plot follows the standard Disney cartoon formula of taking a stereotypical modern story and modern characters and tossing them into an offbeat setting. In this case, that setting is ancient Egypt, and the lead character is Assil, a bad-boy teen who swipes the keys to a pyramid from his architect dad so he can sneak in and guzzle beer with his pals. Before any kegs can be cracked, though, Assil accidentally smashes seven canopic jars, and a mummy pops out to pronounce a death curse. Apparently only the pharaoh can remove such curses, so hijinks ensue as Assil tries to get to the big guy and maybe teach the Arabian ambassador's beautiful daughter how to, um, walk like an Egyptian.

As with Disney cartoons, much of the comedy here is derived from anachronisms. Some of it is pretty groan-worthy, such as the officially licensed Cleopatra shower-curtain rings on sale in the bazaar and a souvenir salesman named Bakshish, but a lot of it is funny and inspired. The musical number performed over the opening credits is flat-out hilarious, as are other little touches, like the automatic camel wash, the hippie Israelites, and a debauched pharaoh. It's all inescapably cute, yet also charming if you appreciate mild-mannered, kiddie-style games where you can't get killed.

The game isn't very challenging, though. Ankh centers on wandering from one conversation to the next. You get tips through dialogue with a succession of weirdo characters like a gangster ferryboat sailor, a tailor with the eyesight of Mr. Magoo, and an overweight guard who acts like a nightclub bouncer and shouts "Oi!" And as usual with these sorts of games, you've got to grab everything that isn't nailed down. Every conundrum here is solved by picking up odd objects like pieces of wood, animal skulls, curry powder, forks, and so on and then combining them into useful gadgets.

Most of the item combos have some rhyme and reason to them, so you're not scratching your head very often. You combine camel hair with a bristleless brush to clean up an idol; turn a crocodile skull, some teeth, and a handbag into a mask to freak out the guards at the pharaoh's palace; whip up a cocktail with wine, bananas, and a paper umbrella; take out a rotting beam with a jar of termites; and so on. If you ever get stuck, you can usually get going again by randomly clicking on items in your inventory until something sticks.

The look and sound of the game are equally charismatic. The visuals are cartoon-style, with big-eyed, big-headed characters that wouldn't be out of place on Saturday-morning TV and exaggerated architecture like a Sphinx that looks like something drawn by Dr. Seuss. Camera angles cause some frustration, though, as the camera is frequently too tightly focused for you to see where you should be going. Important locations like stairs and doorways are occasionally obscured, so you can get lost, at least momentarily. Audio includes a selection of catchy Middle Eastern tunes and some great dialogue spoken in that emphatic style common to kiddie cartoons. The only weak link is the actor portraying Assil--his lines usually seem flat and forced.

The game does have a few notable bugs. On a few occasions, Ankh suddenly froze up and prevented access to any of the onscreen icons or to the menu. These crashes forced system reboots because the game also locks out Alt-Tabbing to Windows, making it impossible to just shut down the game. Thankfully, this happened only a few times throughout the course of the game.

Aside from the technical issues, Ankh is an enjoyable, lighthearted romp. It never hits the highs of the games released during the golden age of LucasArts adventuring back in the early and middle 1990s, largely due to the lack of challenge and the absence of an edge that might have made the game more appealing to adults, but you do get an entertaining story and some chuckles. 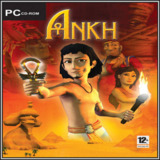 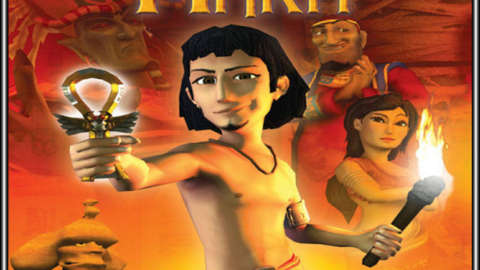 Ankh is a point and click adventure set in ancient Egypt.