If there's a silver lining to Animorphs: Shattered Reality, it's that it would make an excellent game for children who aren't yet old enough to tackle the meatier fare of "real" video games.

If ever there were a definition for the phrase "children's software," Animorphs: Shattered Reality is it. Based upon the popular K.A. Applegate book series and Nickelodeon TV show, Animorphs makes no attempt whatsoever to cater to mature audiences. However, if there are young Animorphs fans in your house, the game should at least distract them long enough for you to take in a movie or grab a nap.

The best way to consider Animorphs: Shattered Reality is as a do-it-yourself installment of the book series. The war between the Andalites and Yeerks heats up when Visser Three, a Yeerk controller, gains possession of a machine with the power to destroy reality itself. Playing as Jake, Rachel, Cassie, or Marco - the four Animorph heroes - it's up to you to use their animal-morphing abilities to recover the pieces of the Continuum Crystal and topple Visser Three's evil scheme. For the most part, this boils down to eight levels of platform-jumping with brief periods set aside for animal transformation and monster combat. Similar to a selection from the Scholastic book series, it translates into barely three hours of actual gameplay.

From a presentation standpoint, Animorphs' shortcomings aren't terribly apparent. Children will delight in taking control of the game's four teenage heroes, each one capable of transforming into a different animal form. The game's character models aren't exactly thick with polygons, but Jake, Rachel, Cassie, and Marco animate fluidly, regardless of whether or not they're in human form or transformed into their wild alter egos: a tiger, bear, wolf, and rhinoceros. Similarly, while the game's backgrounds don't take advantage of the latest transparency or particle effects, the mixture of 2D paintings and 3D structures does a fairly decent job of re-creating the TV show's ecofriendly environments. Even the game's audio - a combination of soft-rock studio music, digitized voice-overs, and rehashed sound effects - at least tries to live up to uplifting thespirit that innervates the Animorphs' philosophy.

Unfortunately, where the game really stumbles is in terms of gameplay and longevity. Jump - that's Animorphs in a nutshell. Across five of the game's eight main levels, you're supposed to navigate an endless series of left-to-right, up-and-down, and right-to-left platform jumps. In a twist that dates all the way back to 1985, some jumps are unevenly spaced, so they require different timing in order to pass. Oddly, for a game based upon a book series in which transformation plays a significant role, animal morphs are a bitter rarity. During platform levels, you can transform only when you're directly confronted by a monster, and, even then, battles are short lived, due to the game's minimal difficulty. The three first-person viewpoint obstacle course areas put you into dolphin, dragonfly, and bat forms for lengthier periods of time, but even these instances are stymied by a distinct lack of enemies and background interaction. Coupled with an overabundance of extra lives and Animorphs tokens (100 of which earn another extra life), the game's just not that difficult or interesting.

If there's a silver lining to Animorphs: Shattered Reality, it's that it would make an excellent game for children who aren't yet old enough to tackle the meatier fare of "real" video games. Otherwise, as a facet of series canon and as a video game, the game doesn't hold up to close scrutiny. 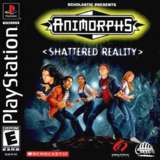