You'd think that at 200 mph the scenery would just blow by - instead, the cars seem to move at a light rush-hour crawl.

In terms of options and career paths, Mario Andretti Racing takes auto racing to a new level of video game realism. Consulting with Andretti himself through much of the design process, the developers at EA Sports created an excellent user interface with loads of options. The game offers both Stock Car and Formula One racing, which means junkies from both sides of the track can get their fill. An innovative career system allows players to compete for an entire season of harsh racing, and with over 16 different tracks to take on, replay value is guaranteed.

The graphics are good, though occasionally marred. Crisp videos dominate the options screens, and a number of graphics tricks are employed during the game to preserve realism (the tracks are completely 3-D, with occasional light-source shading and smoke effects to highlight the experience). Pop-up is visible but minimal. The cars are fairly realistic, and there are nice graphics touches like losing a wheel or breaking a spoiler in the heat of the action.

The simplistic controls, which consist mostly of steering, accelerating, and shifting gears, seem great at some times but flawed at others. Steering takes practice, and turning can be disastrous unless the player learns to brake well beforehand. The physics also seem to be a bit off, too. For example, cars have a tendency to float while crashing. But the main question is: where's the speed?

Overall, Mario Andretti Racing is only an average racing game with some realistic perks to push it ahead of the pack. Despite its racing and graphic shortcomings, die-hard Andretti fans (or, for that matter, Stock Car or Formula One fans), should pick it up. Otherwise, leave Andretti by the side of the road. 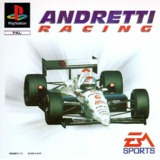