Amy's eponymous infant is psychic, mute, and immune to the mysterious plague that has turned the people of Silver City into zombies. She is also a tiny fool who dashes from a safe hiding spot through a patch of zombies if you leave her alone for a few moments. If you think a frightened little girl deserves your unending patience, you haven't played this game. Amy (little girl) isn't nearly the biggest problem with Amy (downloadable survival horror adventure), however. The game stacks frustration on frustration such that you resent its rudimentary puzzles, shoddy stealth sections, and awkward combat far more than the kid you've led through it all. It's not without decent ideas, but any goodwill they earn the game burns through early and fully; tension and horror quickly give way to exasperation, punctuated by the occasional fake-out jump scare.

You play as Lana, who has busted Amy out of a shady research centre and is escorting her to a hospital when their train crashes into zombie central. Luckily, Amy can't be infected by these ghouls, and radiates an improbable immunizing field; when you hold hands with her, you can't be infected either. In addition to her decontaminating aura, Amy has psychic powers, harnessed by sketching glowing glyphs dotted around the levels. One glyph enables a shock wave that knocks down enemies and barriers; the other creates a dome of silence, used for masking sounds from enemies within earshot. The intriguing premises of the infection system and psychic powers, however, are wasted in the execution.

When you leave Amy's side, the omnipresent infection gradually zombifies Lana. As the contamination sensor on her back goes from green to yellow to red, her skin turns pale and veiny, and her vision becomes red and hazy. When Lana is contaminated enough, zombies mistake her for one of their own, as long as she moves slowly and leaves Amy behind, maybe stuffed in a cupboard somewhere. Despite all the supposed visual cues, it's unclear when Lana is infected enough to pass as a zombie (somewhere between veiny and very veiny). For maximum annoyance, couple that with a city street stealth section with an instant game-over on being detected by an enemy.

In addition, Amy can be on her own for only short spells; if you spend too long sneaking around alone, she comes looking for you, trailing nearby zombies like an undead conga line. The added time pressure generates frustration, not tension, especially because when Amy blows her cover it's tantamount to another game-over. There are frequently no weapons to grab, and there is no unarmed combat; Lana can swing a stick or a crowbar, but nothing else. Amy's commitment to de-emphasising combat also means the sticks and crowbars shatter after a few thwacks. Sometimes mid-fight. And you can't carry more than one. Amy, we get it: you're not about fighting. But this punitive, enforced pacifism isn't fun or scary; it's irritating. When that's layered on top of flaky controls for moving and bashing stuff, plus an aggravatingly heavy camera, Amy does a grand job of discouraging combat by encouraging you to set down the controller and walk away.

The imprecise controls extend to the kid's magic brain powers. You can't control Amy directly--though you can command her to stay still and occasionally send her to a designated spot--but you can clumsily aim and steer her two psychic spells. The most creative sequence based on these powers has Amy positioned high on a walkway, psychic-blasting enemies onto motion-sensitive electric mines, clearing the way for Lana, who is unarmed, as usual. But this, like all of Amy's sound ideas, is undermined in the wobbly execution. Amy can't climb ladders but can crawl through small gaps and press elevator buttons, giving rise to the preponderance of basic elevator puzzles (stand on elevator, make Amy push remote button). Old-school coloured key cards for locked doors are another puzzle staple. The most novel puzzle-like element comes via DNA-based locks; Lana has a hacking device that leads her to possible DNA samples (read: corpses) that might unlock the way forward.

Locations are plain and predictably gloomy. A busy screen with high-speed movement invariably nets you a juddering frame rate. There are a handful of pleasing visual touches; Lana's and Amy's character designs are believable and detailed, and Lana's gradual zombie transformation is reasonably creepy. The latter is accompanied by a red fog that dims the screen and a garbled, sinister murmuring. Elsewhere there are similarly eerie flourishes of sound, but the game's occasional spot of music is nothing special.

Amy isn't a short game, but its length will vary hugely according to your talent and tenacity for mastering Amy's lethal foibles, since checkpoints are infrequent, and there's no way to save mid-chapter. You could clear it in six hours, but you'll more likely take 10, and if you don't finish a chapter in one sitting, you can't even restart at a checkpoint--you are whisked back to the beginning of that chapter.

The sixth chapter ends with only a minor plot payoff and sets up the story for Amy II with a baffling optimism you won't share for Amy's future. Amy has some interesting ideas, not least the pairing of a fight-averse female lead with a fragile but powerful little girl. It's a pity these aren't enough to sustain it through hours of substandard survival horror. 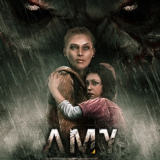