The wholly original cut-and-paste visual style of Amped 3--combined with the manic, increasingly crazy energy of the story mode--make it easier to forgive the oft-repetitive and occasionally plain gameplay.

They call it Amped 3, but just about the only thing that Indie Built's Xbox 360 launch game has in common with the two previous iterations in this snowboarding series is the snow--and, frankly, it's a better game for it. While there have been moments of bizarre levity in its fairly straightlaced predecessors, Amped 3 is just a big scalding-hot cup of crazy through and through. It's an exceptionally difficult game to turn away from, even if much of the actual gameplay experience is comparatively mundane.

Taking a cue from the direction that the Neversoft's Tony Hawk series has taken over the past few entries, Amped 3 wraps up the single-player game in a linear story that puts you, as a unique-but-nameless snowboarder, in the lead role. Aside from your blank slate, there's your crew, which is pretty archetypal: there's Hunter, the spunky, mildly tomboyish girl; JDawg, who has snowboarding ambitions beyond goofing around with the crew; Sebastian, the spacey, plus-sized Zen guru; and WeinerBoy, who personifies a kind of spastic younger-brother energy. The story starts off predictably enough when your crew's vacation fund money gets stolen and you get pinned with the crime. The rest of your crew splits for Chile, bankrolled by a mysterious snowboarding sponsor. You head to Utah with your new friend Dandelion, a reformed hair-rocker now devoted to the obsessive, slightly creepy craft of scrapbooking, to try to earn back the stolen money and reconnect with your crew.

And then everything just gets weird. Without spoiling the experience, just know that, before you get to the end credits, there will be ninjas, a yeti, a Soviet game show, a boy band that's huge in France, an evil video game manufacturer, a tabletop RPG, faux-Mexican mayonnaise, and a very specific homage to Final Fantasy VII. The actual narrative is a bit erratic, with certain characters flip-flopping arbitrarily, and some conflicts are resolved pretty poorly. But the game is so consistent in delivering unpredictably bizarre, funny cutscenes that you really can't wait to see what happens next. And trust us when we say that, even though the story can be a little uneven at points, Amped 3 features what is likely the most stand-up-and-applaud endings ever to be featured in a video game. Ever.

A huge part of what makes the story so appealing--and, really Amped 3 in general--is the game's incredibly inspired, enthusiastic art style. Cutscenes are rendered with 8-bit graphics, sock puppets, full-motion video, anime, stop-motion animation, comic books, and stock educational film footage, all the while pulling from influences ranging from The Yellow Submarine to Entertainment Tonight. From the menus to the actual game itself, there is a very distinct cut-and-paste, multimedia ethic to the way Amped 3 carries itself, making the whole package exceptionally vibrant and really tough to turn away from.

The aesthetics definitely overshadow the game's technical prowess, which speaks more to just how engaging the art style is than any kind of graphical weakness. The biggest strength is its scope. In all, there are six different mountains that you can travel to, and each one acts as a seamless whole. Also, the draw distance goes on for a ways. For example, in one of the more dramatic moments, you'll launch a hang glider off a massive cliff, and you can see the entire valley, right down to individual trees, from thousands of feet in the air. The environments have a natural look to them, though the game's not afraid to inject the courses with some huge jumps that would realistically cause massive bone fractures, and massive, serpentine rails that no human being could actually slide down.

There are always tons of other snowboarders and skiers on the mountain alongside you, all of them doing their own thing, be it tricking off of jumps or just hanging out by the lifts. Unfortunately, all of the other people on the mountain are apparently just apparitions, as you can clip right through anyone without so much as a bump. It could be argued that this was done for the sake of the gameplay, since all this extra snow traffic would undoubtedly slow you down. However, it doesn't stop it from diminishing the game's immersive capacity.

The game looks OK up close as well, with a pronounced difference in texture clarity and antialiasing between standard definition and HD. Though even in HD, the improvement over the graphical detail found on the original Xbox is incremental at best. There is a ton of bump-mapping on the snow, as well as on the characters' hair and clothing. Although, more often than not, this just gives the article in question that weird bump-mapped shine rather than a more-realistic look. Animations look good, though there tends to be a bit too much "snap" between animation routines when you try to execute a bunch of tricks in quick succession. Also, we noticed that, when in courses where there were a lot of obstacles, it was not entirely uncommon for the camera to get snagged on some piece of the environment. For the lion's share of our time with Amped 3, the frame rate was nice and smooth, though there was a small portion of one of the late-game maps (viewed in widescreen) that suffered a severe frame rate hit. It's a pretty minor point, but the severity of the choppiness was quite pronounced, and it made an already-difficult challenge exceptionally frustrating.

Again, this is all just speaking technically, and a lot of these rough edges are made a bit more forgivable by the wild artistic flairs that pepper the courses. One of the best touches is your character's "awesomeness," which is actually an integral part of the character customization. There are points when you'll be trying to impress bystanders with your moves, and every trick you pull off successfully will activate said awesomeness, causing some colorful 2D art to come flying out of your character. Different themes of awesomeness include Zen, sci-fi, urban, and arcade.

Among the most inspiring points in the first two Amped games were the soundtracks, both of which opted to include a huge quantity of relatively unknown artists rather than go for a dozen or so radio hits...and it paid off. The same ethos is at work in Amped 3, and the soundtrack covers a lot of musical ground, including solid genre exercises in punk, heavy metal, hip-hop, trip-hop, and electro. There are also some original songs that crop up when you're presented with different challenges and during certain story sequences--Menage a Brahs' "Bling 4 U" is the big standout track--and they hit the same sorts of bizarre notes as the visual style does. There's a ton of voice work as well, which ranges from sounding blatantly amateurish to overly slick and professional. Sometimes the range in quality of the voice work almost seems calculated, so that even when it's bad, it still fits the mood. The game covers a lot of ground stylistically, and the sound design keeps up. The only times we ever noticed that the system was flexing its Dolby 5.1 muscle was when a random snowboarder would shout something at us as we cruised past, and even then the source seemed locked in on a specific channel, rather than moving dynamically.

The actual snowboarding part of Amped 3 isn't really its strongest point, which is kind of par for the course for the series. While SSX, the other significant snowboarding series out there, has always been primarily a racing game where the tricks existed mostly to help you go faster, Amped has always been first and foremost about the tricks. The first two Amped games were also exceptionally unforgiving in some respects, which led to some really frustrating moments. Most of that frustration has been dissolved in Amped 3, which now uses a trick system more akin to Tony Hawk, though it's a bit more stripped down here.

One of the few remnants is the timing of the jumps--by letting go of the A button right as you leave a jump, you get some extra air. Conversely, let go too soon or too late, and your jump will suffer. Aerial spins and flips are executed with the left analog stick, and you can add "style" to your flips and spins by gently pushing the stick in a direction rather than just jamming on it, which slows down time and also nets you more points. Aerial grabs can be performed by tapping combinations of the X, Y, and B buttons, and those buttons can also be used to switch grind styles when you're grinding on a rail. You can link together different types of tricks for bigger combos with "butter," where you have to maintain balance on either end of your snowboard, which is easily executed by rocking up and down on the left analog stick. The controls are responsive enough, but it seems as though Indie Built overcompensated for the difficulty of past Amped games, and there are times where Amped 3 can be forgiving to a fault.

Each mountain is covered in different challenges for you to take on, and you can view a map of the whole mountain, along with any challenges that are available to you, through one of the main pause menu options. From here you can select a challenge, and then have your snowboarder automatically transported to the nearest ski lift. Alternately, you can back out to the main pause menu, and choose to ride a snowmobile to your challenge instead. The challenges themselves cover a pretty good variety. You'll pull off specific tricks for photographers, try to outtrick a pro snowboarder, run through slalom gates, try to collect a string of special icons within a time limit, or simply hit a high score. Some of the most satisfying gameplay in Amped 3 isn't when you're on a snowboard at all, but rather, when you go sledding. You can choose to hop on a sled at virtually any point, though there are specific challenges that task you with bailing off your sled in the most horribly painful way possible. Thanks to some pretty good rag-doll physics, this mode makes it really enjoyable to just abuse the hell out of your character.

The full online support of Amped 2 was one of its biggest selling points, which makes it a bit disappointing that it has been all but stripped out of Amped 3. In fact, there's no dedicated multiplayer game in here at all. However, you will happen upon a few sledding challenges over the course of the single-player game for which you'll need a second player to participate. The game still technically has Xbox Live support, though this is limited strictly to leaderboards.

It's too bad that the gameplay in Amped 3 isn't more compelling, considering how amazing the story and the overall presentation of the game are. The upside, though, is that the gameplay is quite forgiving, so it's not too difficult to get to the really bizarre and enjoyable parts. Those who actually enjoyed the rather punishing nature of the gameplay in the previous Amped games may be disappointed in the direction that Indie Built has decided to go with Amped 3. But the end result proves to be one of the most original and refreshing games in the Xbox 360 launch lineup. 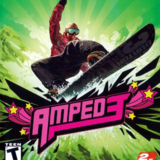