Amnesia just might drive you insane, but in a very good way since this is one of the scariest horror games you're ever going to play.

Latter-day sequels to Alone in the Dark have nothing on Amnesia: The Dark Descent. This first-person adventure from the creepmeisters at Frictional Games who gave us the unsettling Penumbra trilogy is the true follow-up to the original escapades of sleuth Edward Carnby. The game oozes Lovecraftian menace as it strands its protagonist alone in the insanity-inducing darkness of a haunted ruin where spooks lurk around every other corner. In some ways, the game is actually superior to its legendary inspiration, with no cheesy action sequences separating you from the ghoulies and ghosties that want to either eat you or drive you round the bend.

You take on the role of Daniel, who awakens in the darkened halls of Brennenburg Castle at the start of the game with a bad case of--you guessed it--amnesia. Early stages have a bit of a Memento vibe, with Daniel trying to discover hints about his past through reading notes that he apparently left for himself and searching through old diary entries and random scraps of paper. Hints are also provided by flashbacks that regularly pop up out of nowhere. It's a little cliched, but Frictional does some smart things with the old hero-with-amnesia gimmick. The story is fascinating and is told through easily digested chunks scattered through the game. Read everything you find, and you'll be drawn into a chilling castle populated by a lone protagonist who is a bit off his nut and being hunted by shadowy somethings that are more than a teensy bit spine-chilling. From the very beginning, you know you're being pushed toward some great revelation that won't be all sunshine and lollipops. Yet at the same time, you can't wait to get there.

The story and structure are brilliantly realized. For starters, this is a real horror game, which means that you're in trouble from the get-go. Daniel is a few fries short of a Happy Meal and has absolutely no recourse to weapons or any sort of magic or special gadgets. So when the shambling monsters shamble by, you have no choice but to avoid them. Take them head-on, and you either go as crazy as Lovecraft's Charles Dexter Ward or get slaughtered. But you can't hide out in the castle's many shadows. Daniel is unhinged enough that he's afraid of the dark, so the longer you cower in corners or even walk down darkened hallways, the more rapidly he goes insane. As a result, you're faced with two unpleasant options: stay in the light and risk catching a glimpse of some mind-blasting monstrosity that can rip you to pieces, or creep through the darkness and take a chance on winning an all-expenses-paid trip to the funny farm. At times, you don't even have the former alternative. Tinderboxes and lamp oil, which are needed to shed some light on things, are hard to come by, so you find yourself sprinting between the pools of light that dot the game like oases in the blackness.

Everything conspires to totally creep you out. You find yourself racing across rooms avoiding monsters that often aren't even there because the big bads are tough enough yet rare enough that they represent more of an occasional hazard than an oppressive force that would turn the game into an action-oriented sneaker. Spooky, shadowy castle rooms add to the uncanny feeling that something awful is about to happen any second. Most of the rooms provide subtle chills, through the presence of ruined walls, smashed-open ceilings letting in rain, and lone candles sputtering in the middle of lonely cellar chambers. Going insane comes with interesting visual effects as well, including smearing colors, teetering camera angles, and bugs crawling across the screen. You never know what's really there. Sound effects ratchet up the tension. Daniel mutters to himself when going bonkers. Rain pours outside. Footsteps echo out of nowhere. Wind comes up suddenly in closed rooms and snuffs out candles. Disembodied voices cry for help.

All that said, Amnesia is more of a spooky experience than a tough game. Although the game is extremely eerie and tough to deal with because of all that "go nuts in the dark" stuff, most of the puzzles are pretty easy as long as you keep your eyes open and can deal with the often-convoluted layout of the castle. Puzzles generally involve hunting for keys, picking up various objects, jumping to avoid certain death, pulling levers, and that sort of thing. You probably won't get stumped, although the puzzles are involved and organic enough that they don't seem like pointless busywork. A sense of accomplishment can be gained through successfully finishing most of the brainteasers. Instead of just clicking on doors to open them and on levers to pull them, you have to grab onto objects with the mouse and then manipulate them in a somewhat realistic manner by pulling the mouse back, pushing it forward, and so on. So at times you do things like stack boxes to get out of rooms and smash out sections of walls with rocks. It's an interesting conceit, and the physics do serve to make Amnesia feel unique, but you might occasionally long for the ability to stop fussing with the mouse and just handle everything with good old point-and-click mechanics.

Amnesia: The Dark Descent is undoubtedly going to take a place among the most frightening horror games ever made. It is a touch short, at maybe six or so hours of gameplay, although you can't gripe too much about that given the cheap $20 price tag as an online download. Regardless of length, this is one uncanny, unsettling, and just plain old scary experience, especially with the lights out and your headphones on. 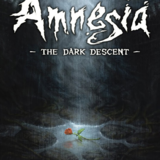