I saw the best minds of my generation destroyed by fetch quests.

Call it Chekhov's platitude. You see a conspicuous title like "Always Sometimes Monsters," and you can bet that in the third act some character is going to fire off that string of words verbatim as part of some truism on the human condition. We're always sometimes monsters, you see. Or something.

I can hear echoes of Don Cheadle's faux-wistful speech from Crash: "In LA, nobody touches you. ... I think we miss that touch so much that we crash into each other, just so we can feel something." In A.O. Scott's Times review of the film, he'd wondered about a possible name for the genre Crash typified: stories "where people from radically different backgrounds are brought together by a grim serendipity that forces them, or at least the audience, to acknowledge their essential connectedness." I find myself wishing Scott had settled on a term for the genre, because Vagabond Dog's Always Sometimes Monsters is it, whatever "it" is.

Always Sometimes Monsters is full of strange people who wax philosophic to those they've just met. People who commit felonies to avoid minor inconveniences, and who constantly vacillate between righteous empathy and callous disregard for their fellow man. One of those people is you, a failed writer and failed lover who has received an unexpected wedding invitation from your ex. The particulars of that relationship are flexible, dictated from player to game by a simple choice of drinks at a party. It's an elegant character select system in disguise, wherein personal qualities like gender, race, and sexual preference are never made to suffer the crass fumbling of sliders and toggles. Always Sometimes Monsters has been lauded for this--and rightly so--but it botches the landing: while the selection of male characters runs the full gamut of body types, the available women range from the impossibly cute to the improbably endowed. The latter cup their breasts between their biceps suggestively, or rest them over a bit of forearm scaffolding.

Ah. So it's a video game we're playing then, lest we'd somehow forgotten--an RPG Maker game, to be specific, boxed into the do-it-yourself engine's low resolution frame and sporting only the most rudimentary audiovisuals. But it's enough to shuffle Always Sometimes Monsters along toward its main thrust--an exploration of choice and consequence. As you set about the task of finding a way to the wedding, the narrative dovetails immediately: You're short on your rent. Do you resort to crime to make up the difference, or sleep on a soiled mattress in the adjoining alley? A few menial job prospects have revealed themselves, but do you keep a promise to do chores for your elderly neighbor instead?

This sort of choice is, for some, the thing role-playing games "do." Linearity, to such a person, is a term of bitter disparagement. But branching narrative isn't always the sexy design it's so frequently made out to be. Before you can approximate your avatar's mindset, before you can make informed, satisfying decisions about relationships and careers, the fiction's table must be set--salad fork on the outside and all. But Always Sometimes Monsters' in medias res story writes a check that the game's amateurish writing can't cash. We're asked to summon up emotional investment for new characters based on a scant few lines of blunt exposition, a la "Sam is my best friend." Then we're asked to sustain that investment as they're dropped from the narrative altogether for most of the proceedings.

The issue is exacerbated by the limitations of the engine powering Always Sometimes Monsters. Without voice, or gesture, or change of expression, characters met can only be evaluated by their portraiture and a bit of anime emotional shorthand--heart icons for love, sweat drops for exasperation. Disappointingly, the personalities found therein rarely deviate much from the often stereotypical appearances.

Take your good friend, Darkeff. You know he's your good friend because your character states that he's your good friend. Darkeff is a musician. He's also a recovering heroin addict. When he stumbles upon a bag of the stuff, I gamely look for options to get it out of his hands, but my curiously incurious character doesn't seem to see much cause for concern. Fast-forward a few days, and guess who's in the hospital, dying for want of healthcare funds. Our good friend Darkeff wears the same sunglasses he always wears even in near-death, and his guitar sits in the corner of his room, perhaps because we might not know who he is otherwise.

You're short on your rent. Do you resort to crime to make up the difference, or sleep on a soiled mattress in the adjoining alley?

Still more issues rise up from the depths to challenge immersion. Always Sometimes Monsters doesn't like to abandon any one narrative thread until it has achieved peak melodrama. So at the behest of another addict, you're inexorably compelled to blackmail the doctor, either by snooping through his files or, as I elected, by smashing up his expensive car. But as luck would have it, another character who'd just earlier promised me a ride out of town was planning, unbeknownst to me, to borrow that very same car. Grim serendipity, indeed.

With choice and consequence thusly meted out, the results of each of Always Sometimes Monsters' vignettes are entered into your character's diary. But considering the inherent absurdity of most of the scenarios and the disconnect between player and character, there's no question about who is authoring those journal entries. When a character recites your ignominious history back to you near the game's end and asks you to reflect on each entry--this actually happens--it reads like a case of mistaken identity.

Pleasantly, Always Sometimes Monsters doesn't hand down much in the way of judgment. There's no morality stat here, and though most of the cast is given to fortune cookie musings ("Stay true to who you are, whoever you think that is" says one in parting, apropos of nothing), they're mercifully laissez-faire. While this does result in some juvenile apathy, particularly during a mayoral election mid-game, Always Sometimes Monsters' moral reticence is its strongest quality. The subtle but persistent gravitational pull of poverty in the game means a lot of time spent performing excruciating temp work, or hanging out in alleyways and bars, but most of Always Sometimes Monsters' interesting characters occupy those very same haunts.

The camera's viewpoint, an otherwise awkward mash-up of overhead and axonometric shots, reveals all the pixelated squalor, all the detritus and homelessness and violence that so often goes ignored by the upper crust. The RPG feels at home here, among the dregs of society, like it did back in the Midgar slums of Final Fantasy VII. The genre's old mainstays--fetching, bartering, and grinding--are much more suited to a blue collar than they are to plate armor.

View Comments (67)
Back To Top
5
Mediocre
About GameSpot Reviews 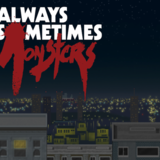 Nick Capozzoli grinded through Always Sometimes Monsters' story over the course of a dozen hours, mostly carrying crates from one side of a factory to another. Watch out for that crate part. 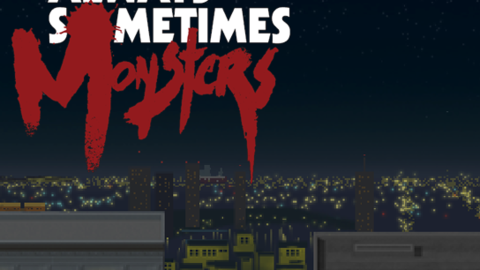 Always Sometimes Monsters is the story of life, love, and the things we will go through to find happiness in both.