All Star Tennis 99's good-natured quirkiness is something of an afterthought to its middle-of-the-road gameplay.

Tennis has finally arrived on the N64. Why did it take so long? Well, it's really hard to do right. Did Ubi Soft do it right? Yes and no. Though passable, All Star Tennis 99 looks a little choppy, plays a little slow, and isn't particularly smart. But it does have Bomb Tennis. What's that, you ask? Read on.

Graphically, this is pretty average fare. Though the motion captures are fairly fluid, the characters themselves are choppy, and they suffer from significant polygonal flickering. The ones at the far end of the court are so noisy they resemble TV static. Thankfully, unlike in Ubi Soft's Tennis Arena for the PlayStation, there's no animated crowd behind the players to further obscure matters. (That always seemed like unnecessary drag on any game's engine, so it's nice to see it removed in favor of a cleaner look.) All Star Tennis 99 does OK in the illusion-of-depth department. (After all, this is tennis, and nothing much happens besides a ball approaching and receding.) Though the ball itself is essentially a featureless two-dimensional circle, its shadow provides enough of a sense of depth for you to get the job done.

Like in many console tennis games before this one, control is tricky at first. As usual, the primary difficulty is timing. Multiple swings are available - for example, slices, lobs, etc. - but with the exception of the lob, the difference between these moves is negligible. The short slice just lands slightly closer to the net. That's about it. What's worse, there seems to be no real way to control the speed of your swing. Sometimes it's instantaneous. Other times it takes forever, regardless of the swing you choose. Another oddity is that control seems to be more sluggish from the baseline than from the net. Analog-stick support is a little dubious as well. It's not true analog, and it always reacts in one of two ways: Press it hard and you break into a run; nudge it gently and you creep forward for a preset half second or so, and then you run.

All Star Tennis 99 doesn't have the smartest AI, so you'll probably wish there was a higher difficulty setting than the three given. In fact, the only challenge it offers is in its special moves, which are almost as potent as they are off-the-wall. When you win points or engage in really long volleys, the power-up meter in your corner of the screen fills up. Once you've earned it, you can pull off some really strange stuff, like the one where the ball does a full stall on the net, is subsumed in a weird hypnotic mandala swirly thing, and then shoots downward at a frightfully acute (and totally unpredictable) angle. For the purist, there is an option to turn all special moves off.

But what's really weird is Bomb Tennis. That's right, Bomb Tennis. This bizarre anomaly is one of the strangest novelty additions ever to make the final cut in a sports game. Whenever the ball touches the ground, a large cartoony bomb appears with its fuse lit. A few seconds later, it blows, and if you're caught within the radius of the blast, you lose the point. Really weird. It's too bad it only takes a few minutes to realize that you can just play your whole game from the baseline and remain safely out of harm's way. The AI isn't smart enough to draw you to the net. Even a human would be hard-pressed to do that though, since you just don't have that much control over the length of your shots.

An average assortment of options rounds things out. You can select different-colored courts and balls. Eight licensed real-world players are included in the game. The women tend to play a faster game at the net; the men have more of a power backline game. Other than that, the differences are minor. The sound is typically austere. There is a sense of humor at work in the commentary, however, as the color man expresses a distinctly British distaste for the crowd's noisier tendencies. At one point, a cell-phone's ring draws laughter from the crowd, which in turn draws chastising words from the announcer.

Ultimately, All Star Tennis 99's good-natured quirkiness is something of an afterthought to its middle-of-the-road gameplay. Though not a bad first tennis game for the system, if the graphics were smoother and the control tighter, the game would be a lot more fun. 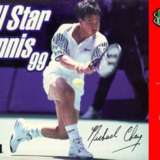 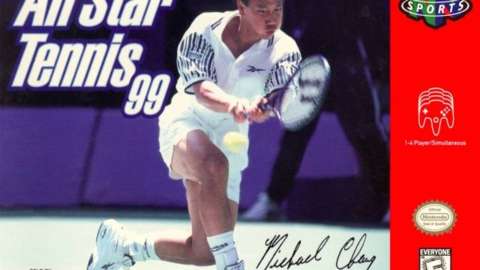 All Star Tennis 99's good-natured quirkiness is something of an afterthought to its middle-of-the-road gameplay.