This latest rendition sticks to the basic things that have made the series great, making it worthwhile even for those who aren't fans of the older games.

Acclaim's All-Star Baseball series has been known for its great (well, for the N64, anyway) graphics and solid gameplay. The series' transition to the PlayStation 2 is, for the most part, a smooth one, and this latest rendition sticks to the basic things that have made the series great, making it worthwhile even for those who aren't fans of the older games.

All-Star Baseball 2002 has it all. All the teams, players, stadiums, and modes of play, as well as a dizzying number of configurable options for just about everything in the game. For instance, you can play a full 162 game season with lots of different variations, including the ability to disable interleague play and the ability to play a balanced (where you play against every other team with similar frequency) or unbalanced (where you play more games against teams in your division) season. In addition, you can choose to play half a season, a three-game round robin, and many other lengths of season play. The game also has standard modes such as exhibition, home run derby, all-star game, World Series, and batting practice, as well as an in-depth create-a-player feature that lets you create up to 25 unique players with abilities and appearances set to your preferences. You can use the game's team management mode to draft players, set lineups, set pitching staffs, trade players, sign free agents, and check out statistics for hitting and pitching in 44 different categories. Plus you can earn season awards like the MVP, Cy Young, and Rookie of the Year. If that's not enough, the game even has classic uniforms for every team and a Cooperstown Hall of Fame team, which is populated by the likes of Reggie Jackson, Mike Schmidt, and Nolan Ryan.

If you've ever played any of the previous All-Star Baseball games, you'll feel completely comfortable with All-Star Baseball 2002's control scheme. The game features a unique 3D batting interface that gives you a great degree of control over the placement of the ball once it's hit. The right analog stick controls the angle of the batting target, which in turn controls the direction of the ball after you've made contact--tilt the target out and you'll give the ball lift, tilt the target downward and you'll be set up for a line drive. That is, of course, if you line up the batting target and time the pitch perfectly, which is an intricate skill that you'll never completely master. If batting using a target system isn't to your liking, All-Star Baseball 2002 gives you the option of turning it off and simply using the traditional one-button method. You also have the option of swinging the bat with two different buttons. One is for a simple contact hit, which has a greater chance of making contact with the ball, and the other is for a power swing, which may send it further than the contact hit but is a bit tougher to actually hit the ball with. Pitching is a little more traditional. Each pitcher has a set of pitches at his disposal that are mapped the buttons on the controller--you simply select the pitch and throw the ball. You do, however, have a reasonable amount of control over the ball when it's on its way to the plate, but altering the course of your pitches after they've been thrown degenerates the pitcher's stamina more rapidly.

In the outfield, the game is fairly straightforward. Players can jump to try to steal a home run at the wall and make diving catches. The animations of the players throwing the ball may make it seem like the process takes a little more time than it should at first, but you get used to it. The ball physics make fielding fun since everything in the stadium is collision-mapped. This means that now, when you hit a grounder directly back at the mound, it'll realistically hop over it and get into the air a bit. Everything the ball comes into contact with affects it differently--it rolls freely in the dirt, while the grass slows it down faster. You can even assign control of individual positions to other human players. The AI of the computer opponent on the game's rookie setting is less aggressive than on the harder difficulty settings. For instance, the first baseman won't make an aggressive move like a dive to make a stop, but it will instead let the ball roll past him and assume a cutoff man position for the outfielder while the second baseman simply runs over and picks it up. But bump up the difficulty setting and you'll see him snare the ball and race over to first to make the out himself.

The AI of your base runners when left on their own will occasionally misinterpret a ball shot into the gap as a pop fly and fail to run the bases correctly. Simply paying attention to their actions and manually moving them solves this problem. All in all, the game's AI is really good and will test your ability--picking the right pitches and executing them like in real baseball is really what the game is all about. Doing well at the plate will, as always, give you a fighting chance.

Visually, All-Star Baseball 2002 is incredibly realistic, with extremely detailed stadiums and player models that move with motion-captured realism. The most striking visuals in the game, however, are the game's facial textures, which are beautifully done and make almost every player instantly recognizable. When you see Sammy Sosa or any of the other players walk out onto the field, you just simply can't help being awestruck. Next in line of jaw-dropping visuals are, of course, the game's amazing re-creations of all 30 MLB stadiums. Every inch of the stadiums has been accurately brought to life with extreme detail such as working scoreboards and JumboTrons in the outfield that actually display a picture of every batter who steps up to the plate. The dugouts have the actual players sitting in them, and the bullpens are realistic as well, since when you make the call to have a relief pitcher start warming up, you'll see the pitcher and a catcher enter the bullpen and start throwing the ball back and forth. Add in the 130 different batting stances, 50 different pitching animations, advertisements in the outfield, and dynamic lighting and environmental mapping to give the game extremely realistic shadows and reflections during the night or day, and what you have is a game that looks amazing.

All-Star Baseball 2002's play-by-play commentary and analysis, which is provided by Arizona Diamondbacks manager Bob Brenly and Thom Brennaman, is a bit dry. They do get the job done, and in some ways their work has that cool radio-broadcast quality to it in the sense that they simply call the game without much fluff. The sound effects in the game are extremely well done. When you make contact with the ball at the plate, you can instantly hear the difference between a simple grounder or a deep smash that'll sail over the wall. Even the simple sound of the ball smacking into the catcher's mitt is impressive since the clarity of the sound is so perfect. The game's menu screen features music that is very theatrical, but aside from that, the game is fairly music-free except for the usual stadium chants. For instance, when the home team gets on a hitting streak, you'll start to hear the crowd do the "we will rock you" stomp and clap routine until it sounds like everyone in the stadium is doing it. All the little audio touches really add up to help deliver the experience of being at a game. Little touches like the sound of the crowd clapping when a home-team pitcher strikes out an opponent really brings the experience to life, and even the echo effect of the stadium announcer's voice adds to the experience.

In the end, the amount of control the game gives you over the placement of your shots and pitches makes playing All-Star Baseball 2002 very involving and fun. Plus, with the ability to turn most of the intricate control features off if you prefer a game based less on motor skills and more on simple baseball strategy, All-Star Baseball 2002 is a game that is well suited to both fans of arcade-style baseball and fans of and simulation-style baseball games. If you're into baseball, then this is the game to get--its presentation is extremely polished, and it really delivers the experience of being at and playing in an actual MLB game. 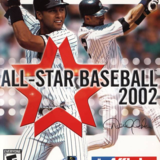