Due to limitations in graphical and sound capabilities, handheld baseball titles still have a long way to go before they catch up to their console counterparts. Acclaim's All-Star Baseball 2001 is a step in the right direction.

At first glance, All-Star Baseball 2001 bears a startling resemblance to last year's release, but looks can be misleading. The game still features all 30 Major League teams, a Cooperstown Hall of Fame team, and updated rosters with more than 500 real-life players. Home run derby, batting practice, all-star, playoff, and season modes all make their triumphant return. Once again, password saves keep track of progress. From here on out, though, similarity gives way to improvement. The game still features large character sprites and well-defined stadium visuals, but player movement and animation are way up from last year. Taller players have a slight hunch, bigger players run as if they're worn out, and batting is full of follow-through. Due to a slight increase in color depth and size, uniforms look much less pasted-on than in prior efforts.

While last year's release has decent AI, All-Star Baseball 2001's intelligence borders on uncanny. CPU players will attempt to steal bases on slow pitchers, and they'll do it frequently if they can get away with it. If you find yourself caught in a rundown, consider yourself toast. Not only that, but CPU batters have strengths and weaknesses similar to their real-world counterparts. Going low and away on Big Mac or Edgar Martinez doesn't guarantee a strike, and Mark Mclemore can't buy a hit. Though batting is merely adequate, allowing only height variation, pitching is drool-inducing awesome. Each pitcher has a variety of pitches - such as fastballs, sliders, sinkers, split-finger fastballs, curve balls, and knuckleballs. Speed and direction are variable as well, giving players total control over placement and delivery. Backing things up, fielding is responsive and quick. Unlike most GBC baseball titles, one never gets the impression that they're at the computer's mercy when playing All-Star Baseball 2001.

If ASB 2001 has any glaring fault, it's that the game's sound is merely acceptable. While there are a few organ snippets, the majority of the game is dead silent. Pitching and batting effects mix things up a bit, but the sound is extremely tinny. Still, these faults are meaningless compared with the game's rich gameplay and satisfying visuals.

Due to limitations in graphical and sound capabilities, handheld baseball titles still have a long way to go before they catch up to their console counterparts. Acclaim's All-Star Baseball 2001 is a step in the right direction. Gameplay is intelligent, the visuals ooze with quality, and the number of features is off the charts. It is true that the game is merely an update of last year's release, but a number of tweaks and refinements make it worthwhile in its own right. As such, veterans may wish to try before they buy, but rookies shouldn't hesitate to pick this one up. 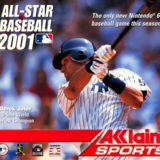