This battle between invading extraterrestrials is hardly a fair fight. It's also not a very interesting one.

From beginning to end, Aliens vs. Predator: Requiem is an incredibly easy game. There's not a single moment in this third-person shooter when you feel the least bit challenged, whether in terms of combat, scavenger hunting, or its occasional attempts at platforming. Although it's true that a game's difficulty is hardly the sole indicator of its overall quality, every other part of the game is far too mired in blandness to prevent you from drifting off under the spell of mindlessly simple gameplay.

Ever the movie tie-in, AvP shares a similar plot with the upcoming film of the same name. In short, an alien ship has come crashing down in small-town Colorado, and you (the predator) must destroy all traces of this newfound extraterrestrial life in the area. Along the way, you'll also encounter a smattering of humans, both of the military and unarmed civilian variety. There's early promise when you gleefully toy with the predator technology at your disposal, such as invisibility cloaking, three types of special vision modes, and a handful of neat weapons. Unfortunately, that novelty quickly wears off as you discover there's rarely any strategic purpose in using any of it.

For this you can thank a combat system balanced too heavily in your favor, as well as level objectives marked out in painfully obvious detail. When it comes to fighting, you're basically invincible. Your health bar can be depleted, but if you're feeling particularly low you can simply bring up the map screen and literally choose the ability to restore all your health. The price for drinking at this fountain of eternal life? Your energy bar (which fuels cloaking and certain types of optional weaponry) depletes for a brief 10 seconds. On top of that, taking down enemies is as easy as pressing both shoulder buttons to lock on and using your preferred ranged weapon to kill them from afar; the need to mix up weaponry never once arises. Battling swarms of aliens and armed military personnel amounts quickly enough to more of a mild nuisance, akin to swatting flies, than anything resembling a compelling challenge.

One wrinkle added to the combat is the inclusion of honor points. They're a reward for not killing civilians and "tagging" an alien before you blast it away. The more you get, the more you can upgrade your predator's armor and weapons. The problem is that you can haphazardly kill anything that moves and still stumble into plenty of honor points. Furthermore, all they really do is make your already invincible predator that much more dominating.

But the game has you do more than just kill. You'll also need to find bits of alien technology (pieces of their ship, etc.) scattered across the levels so you can dissolve them from existence. Unfortunately, any sense of exploration is squashed by a map screen that pinpoints the exact location of all these chunks of alien refuse. The game holds your hand just as tightly as you advance through the levels. Any time you need to smash a weakened wall or turn a crank to progress to the next area, these point of interest are already marked with a giant, twirling red triangle. You're left wondering why you're playing at all if the game won't let you figure anything out on your own.

That said, the levels themselves do have a nice bit of variety. Early on you'll be prowling through a dense forest, whereas down the road you might find yourself going toe-to-toe with aliens on a basketball court--no, that's not a metaphor for shooting hoops--in the game's high school level. What's more, you get to choose your path in the game. For example, you can make your way through the town by going underground, through the suburbs, or via the industrial buildings. But these branching paths all wind up at the same final level with the same ending. The foregone conclusion of a finale really puts a damper on this feeling of choice. Equally disappointing is the fact that these levels, though varied in setting, tend to look consistently drab and uninteresting with their lack of light and muddy textures. It's not bad, by any means--just really bland. The same can be said for the game's limited sound effects and easily forgotten music.

As mentioned before, it's awfully easy to drift off while playing AvP because none of the game's peripheral elements do much to keep your interest. This is true for the bonus skirmish mode as well as the ad-hoc multiplayer. In skirmish, you're given five minutes to clear out as many aliens as you can in one of the levels from the main storyline. The final score is tallied up in honor points, but nothing really comes of it. No rewards, no unlockables, nothing. The ad-hoc multiplayer is basically co-op skirmish in which you play alongside a friend. Even in this mode, you're still not given anything of value for your efforts, just a meaningless score and the feeling that you've wasted the last five minutes.

In the end, Aliens vs. Predator: Requiem isn't a terrible game; it's just really mediocre. It's hard to say if it would be more interesting if it weren't so easy, given that so much of the game fails to grab your attention even when you're not taking difficulty into account. What's easy to say is that there are far better action games on the PSP than this one. 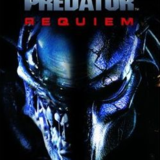