Extinction does a good job of translating Aliens Versus Predator to an RTS, but it could have benefited from a few more months in development.

The Aliens Versus Predator universe has been a staple of video gaming for a number of years now, and it's not hard to see why. It draws from two well-developed and immensely popular action movie franchises, both of which feature creatures, characters, and weapons that lend themselves nicely to the typical action game. Most of the AVP games released to date have been first-person shooters, with a few brawlers thrown in here and there, so it's a bit surprising to see that the newest one, Aliens Versus Predator: Extinction, is actually a real-time strategy game. It's even more surprising, given the somewhat dubious history of RTS games on consoles, that Extinction is a thoughtfully designed, complex, and pretty fun game to play. Alas, a dearth of supplemental features and some flimsy presentation drag down what could have been a more solid overall package.

Most of the Aliens Versus Predator games let you play as all three of the involved factions--predators, aliens, and colonial marines--and as you'd expect, Extinction follows suit. Each of the groups has a linear, seven-mission campaign to play through that will have you tackling a wide assortment of mission objectives. Though the AVP franchise might not seem like the most natural choice for the RTS treatment, the resource and building models for each of the three races are surprisingly appropriate to the features of their respective races. In fact, the imaginative way in which the designers have differentiated the humans from the aliens from the predators is Extinction's strongest point.

You won't do any building and base construction in Extinction like you've seen in Warcraft or Command & Conquer; rather, the game is strictly focused on unit management and combat, which helps to streamline the gameplay. Each race has a distinct method of obtaining new troops. The colonial marines gain credits by killing enemies and repairing atmosphere generators, and these credits can be put toward upgrading troop abilities and calling in new units via dropships that stop at nearby landing beacons. There are a diverse number of marine combat units, including pulse rifle-equipped infantry, flamethrower troopers, and smartgunners that use those huge, hip-mounted machine guns you saw in Aliens. There are a few support units as well: The medic can heal your troops and cure health anomalies, the synthetic can deploy gun turrets and has a motion detector for picking up offscreen movement, and the commtech is your basic support unit, whose job it is to call for extra troops and repair atmosphere generators. The predators have a straightforward resource model that's effectively based on honor. As you kill enemies, you can rip the skulls from their corpses in honor of the hunt. The more honor you have, naturally, the more predators will want to join your clan--they can be called in at any time and simply land on the planet from space. The predator units are all combat-oriented, and they have a number of special abilities like cloaking and self-healing that use up slowly regenerating energy points.

The aliens' method of building is the most original in Extinction, and it takes a good bit of getting used to. It revolves around a queen alien, who can deliver extremely powerful attacks and also remains in the hive to lay eggs. As film fans will know, the eggs hatch into facehuggers who can latch onto other creatures and impregnate them with an egg that will eventually become a fully grown alien. There are two kinds of facehuggers that correspond to two kinds of aliens--purebreeds and transbreeds. The purebreeds include the queen and a couple of other powerful aliens, while the transbreeds are spawned from regular facehuggers, and the kind of alien you get depends on what kind of host was impregnated. Cattle-like oswocs will yield a drone, which is the worker of the alien hive, while a warrior alien will be birthed from a human, and a predalien will spawn from an impregnated predator. Creating a horde of vicious, marauding aliens from hapless nearby inhabitants is a perversely pleasurable experience, and it's nice that the developers put some real thought into how the alien game mechanics should work in an RTS setting.

It's no secret why there haven't been many real-time strategy games on consoles--the control scheme is simply much easier to handle with a mouse and keyboard than with a controller's limited number of buttons and the imprecise cursor control of an analog thumbstick. Thankfully, Extinction's controls are pretty well adapted for use with a controller, and though they do take some getting used to, once you've gotten them down you'll be moving around the map and issuing orders to your units without putting too much thought into the process of doing so. The controls follow many of the same conventions you would find in an RTS on the PC--you can select multiple units and assign the grouping to a direction on the D pad, double-click a unit to select all of that type of unit onscreen, and so forth. There are a number of ways to automate your troops' actions, too, such as by selecting their offensive or defensive posture, having them patrol waypoints, and telling them to perform basic functions without being ordered to each time (such as predators collecting skulls or alien drones dragging comatose humans back to the hive). Though the control isn't without its annoyances, it's pretty safe to say that the game plays about as well with a console controller as can be expected.

Extinction may be a pretty good game, but by most standards it's not such a good-looking game. The unit models aren't particularly detailed, though they don't really need to be since they're seen from far overhead, and they do animate pretty well. The backgrounds are usually rather bland, though, without a whole lot of detail in the terrain or other interesting features to look at. The game looks basically the same on the Xbox and PlayStation 2, with the nod going to the Xbox version for less aliasing and a higher frame rate. The sound design in Extinction is of mixed quality. Some of the sound effects are right there with their movie counterparts, such as the humans' pulse rifles and motion detectors and the scream of a predator when it has harvested a new skull. The unit voices are mostly muddy and uninteresting, though, and there's no memorable music to speak of. It's too bad there isn't better presentation wrapped around the core gameplay.

Unfortunately, there isn't a whole lot to AVP Extinction beyond the three single-player campaigns. That's a shame, because there was clearly enough thought put into the mechanics of the gameplay that the replay value would have been extended considerably by a skirmish mode or perhaps even multiplayer online support. As it is, though, you won't have much reason to play the game after you finish it unless you just want to try a harder difficulty. Overall, Extinction does a pretty good job of translating Aliens Versus Predator to an RTS, but it could have benefited from a few more months in development. 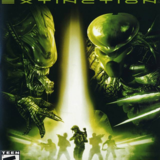 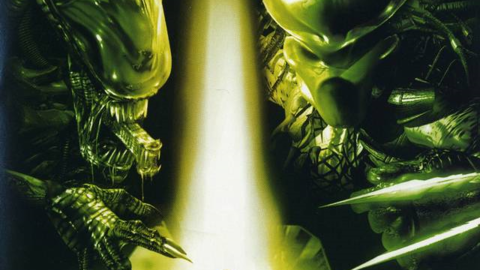 Extinction does a good job of translating Aliens Versus Predator to an RTS, but it could have benefited from a few more months in development.