Aliens: Infestation is an unforgiving and exciting retro romp.

Aliens: Infestation is much like the xenomorph creatures that populate the game's world: fast, unnerving, and utterly ruthless. It is not a game for the faint of heart. This 2D side-scroller harks back to the golden age of 16-bit games like Metroid and Castlevania, in which there was no hand to guide you, no forgiving checkpoint system, and no regenerating health. It's just you and the aliens, locked in battle through tight corridors and unlit rooms where only one can emerge the victor; the other becomes a pile of blood and guts strewn across the bulkhead. It's a game that demands great patience and skill, but rewards you with exciting combat, intelligently designed levels, and a reverent use of the Aliens licence that fills every moment with nail-biting terror.

The setting for your terror-filled journey is the Sulaco--the same ship whose fateful journey is chronicled in the film Aliens--as well as some short stints on the alien homeworld of LV-426. You take control of a team of four marines who must investigate disturbances aboard the Sulaco, initially thought to be the work of an enemy faction armed with combat droids. Of course, the droids are just the tip of the iceberg. As you delve deeper into the ship, it soon becomes clear there's something more sinister at work. Hints about what might be happening, your objectives, and references to "The Company" are dropped via messages from your commanding officer, while the dark, moody corridors you explore spring surprises on you, such as falling debris and cats that drop from vents. They might be cheap jump scares, but they do a great job of keeping you just enough on edge to find the inevitable Alien reveal and its tasty human snack a shock.

Once you discover the first alien, things get challenging quickly. The creatures move fast, clinging onto walls and ceilings and springing from underneath the floor. While your trusty pulse rifle can take them down, it takes quite a few rounds to do so, meaning that you spend a lot of time running for your life in the early stages of the game. This isn't always easy. Your marine has a stamina bar, which controls how much he or she can run or use other dodging moves such as jumping and rolling, making for some extremely tense situations. Lifts and doorways become lifelines to safety, and there's a huge feeling of relief as you make it to one with just a whisper of stamina left.

You gain more-powerful weapons such as shotguns and flamethrowers as you progress, and an upgrade system lets you power up your weapons to make fights easier. However, finding them requires a lot of legwork. They're located in hidden vents and rooms, many of which are inaccessible to you until you find an access card, gain new abilities, or find a new weapon that lets you blast your way through. As in the Metroid series, there's a lot of backtracking required to open up areas that were previously inaccessible, and this makes up the vast majority of your objectives. A map on the bottom screen allows you to keep track of your progress through the maze of corridors, with different colours marking out places you've already visited, as well as the location of your current objective.

As your weapons become more powerful, so too do the aliens, ensuring that battles are always challenging. Larger aliens present the greatest threat, but even smaller facehuggers prove difficult to deal with when they're unleashed upon you en masse. Upgrades, ammo, and health packs are constantly in short supply, adding an edge of survival horror to the proceedings. But the tight controls and the splashes of green gore that erupt from aliens make slaying them exciting and fun. Keeping an eye on your health during these encounters is important too, because although you have four marines in your command, you control only one at a time--the rest act as extra lives (if a marine dies, he or she is dead, permanently). There are extra marines dotted around the map, but they're usually hidden away in the extremities of the ship. Each of them has a unique personality and tongue-in-cheek text dialogue that's often self-referential. They drop film quotes with aplomb, which will raise a smile with fans of the movies.

Aside from the shortage of supplies, challenging enemies, and lack of regenerating health, you have to manage without a modern checkpoint system. Instead, there are rooms in each level where you can resupply and save your game. These, too, are in short supply. It can be frustrating to have gotten so far, only to be killed and sent back to a much earlier save point, but the fact that they're scattered so sparingly only adds to the tension. Fortunately, there's always a save point nearby before you engage in one of the game's many boss battles--a merciful inclusion given how difficult they are. There's a technique to winning each of them, but it's never spelled out for you, meaning you've got to engage your brain as well as your reflexes with a rifle.

The game's challenging nature means it takes a few attempts to make it through the campaign, but even then you can finish it in around four hours, which is disappointingly short. There's little reason to play through it again either, with no new-game-plus mode or unlockables, save for a knife minigame that's fun for all of five minutes. Still, what's crammed into the short campaign is an impressive nod to yesteryear, with its intelligent level design, thrilling enemy encounters, and mysterious narrative keeping you on the edge of your seat right through to the end. The references to the films are also impressive: the sound of your pulse rifle, the wail of an alien, and the constant blip on your motion detector create a claustrophobic atmosphere that immediately conjures up memories from the films. Even the stylised 16-bit-era graphics do a great job of capturing the look of the movies. Yes, it's hard, and yes, it's unforgiving, but Aliens: Infestation is so well put together, so exciting, that mostly anyone with a DS will enjoy it…mostly. 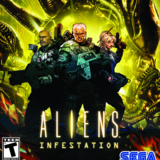