Playing Alice: Madness Returns isn't as exciting as looking at it, but you'll still enjoy getting lost in this twisted fantasy adventure.

In Alice: Madness Returns, the heroine of American McGee's Alice has not escaped the demons she worked so hard to banish. The Wonderland of her imagination has been mangled into a dark and demonic caricature, filled with even more torturous hallucinations than she last encountered. Alice's mind is a dark place indeed, and in this long-awaited sequel, we discover that the real world isn't any sunnier. Creative and creepy visuals give this action platformer a twisted and surreal vibe, drawing you into a land inhabited by fire-breathing doll babies and squirming leeches. The action doesn't display the same kind of creativity, unfortunately. The game recycles the same basic ideas over and again, and its failure to grow and challenge leads to occasional tedium. Nevertheless, leaping and floating through an eerie oversized dollhouse and a Japanese-inspired dreamland is a joy, and there are enough hidden secrets to make it worth inspecting Madness Returns' grotesque nooks. Alice: Madness Returns is a fun but thoroughly ordinary game that takes place in an extraordinary setting.

In American McGee's Alice, the titular dreamer had seemingly overcome her insanity. A fire at her home had killed her parents and sister, leaving both her mind and her imagined Wonderland in shambles. She eventually triumphed over the Red Queen and her own madness, but it seems that this victory was a temporary one. Alice is still under medical care, struggling to remember the circumstances that led to her family's horrific end. Her psychiatrist urges her to forget her past, insisting that doing so is the only way to wellness. Yet forgetting proves a formidable task, and soon Alice finds herself once again lost in her imagination, where Wonderland lies in ruin. To save herself, she must save Wonderland, and vice versa. But this is not the curioser and curioser world author Lewis Carroll dreamed up when he wrote Alice's Adventures in Wonderland. Rather, it is a place of nightmares, where the card guards that once protected the Red Queen are now undead monstrosities, and hobbyhorses are not playthings, but deadly weapons.

Wonderland itself is Madness Returns' finest attribute. Each chapter explores a different visual theme, some of them impossible to describe in a few simple words. Rusted platforms float against a cloudy yellow backdrop, next to clock towers from which giant forks and teapots dangle. Gnarled vines twist into an off-kilter heart above a giant castle whose spires lean in all directions. Alice's clothing changes from chapter to chapter, and her flowery prints and blood-red fabrics subtly match the level art. Wonderland is not the only place you explore, however. At the start of each chapter, you wander about an increasingly morose London. This vision of that city is more grubby and industrial than even Carroll's contemporary Charles Dickens conjured, drained of color and inhabited by impossibly wrinkled old crones and filthy fishermen. This world is not flawlessly rendered, however. Textures pop in frequently (and sometimes back out, and then in again), and the game pauses at bizarre times to load data. Audio is an occasional issue as well: characters might talk over their own lines and are sometimes drowned out by the ambient music. At least that music is evocative, if not as excellent as the original Alice's score. The occasional tinkling of a toy piano and the buzz of low double basses provide fine contrast to the pounding drumbeats that accompany battle.

Alice is generally a dream to control due to the effortless way you can string multiple jumps together and float gently downward. When you drift or perform midair leaps, flower petals blossom in your wake, emphasizing Alice's grace in a graceless land. The smoothness of motion makes bouncing from springy mushrooms and catching drafts of air a delight, and rarely is timing or landing a leap a struggle. For a few hours, you get caught up in freewheeling around this unusual place, scanning for secrets and admiring the view. You can shrink yourself to minute size and enter keyholes, where you might find lost memories, Madness Returns' equivalent of audio logs. You come across floating pig snouts and can shoot them full of pepper from your pepper grinder to uncover new pathways. Hidden treasures are scattered all over, and hearing the telltale snort from a nearby snout elicits a pleasant Pavlovian response: you hear the oink and immediately move into scouting mode.

Every so often, Madness Returns' level layouts displays a glimmer of creativity, such as when playing cards flip and slide into view, extending your path. However, reaching your destination is a usually predictable affair. You spend a lot of time jumping onto floating surfaces and into gusts of air so that you can flip a switch that creates another set of surfaces and gusts. Sometimes you need to drop bombs to weigh down pressure plates, shrink to miniscule size to bring invisible platforms into view, or run under a spiked ceiling threatening to slam down on you. But Alice: Madness Returns has a limited bag of tricks, and so you frequently perform the same actions in the same context. Monotony too often results, particularly when your objectives are simple fetch quests. (Some residents of Wonderland are unwilling to divulge information unless you do them petty favors.) Levels have no sense of momentum: were it not for the unique environments, you could replace one sequence with any other and not even notice, and navigation is barely more challenging in the penultimate chapter than it is in the first.

Luckily, combat freshens things up, due in part to the horrific enemies you face. Hideous monsters dripping with black ooze fling projectiles from above, and goblins wielding dinnerware threaten to stab you. Each enemy requires a slightly different technique to bring down, and Alice is fortunate enough to have the right tools for the job. First up is the returning vorpal blade, Madness Returns' version of a light attack. The hobbyhorse does strong attack duty, while the pepper grinder is your basic ranged assault weapon. Then there's the teapot, which you can think of as a grenade launcher, as well as your parasol, which you use to block incoming attacks. Once you get accustomed to the patterns and weaknesses, the vile fiends aren't difficult to fell. But while fights aren't often challenging, facing multiple enemy types at once is still fun, because you must use your entire arsenal in a single battle. Many battles are too easy to feel like anything but filler, and the sticky target lock can push the camera into awkward positions. But the sound of porcelain shattering when you slam your hobbyhorse into a wretched freak crusted with dolls' heads is worthwhile compensation.

Alice: Madness Returns occasionally tries to enhance the proceedings by wandering outside its comfort zone. You slide down ramps, solve some puzzles on a chessboard, jump about in a two-dimensional version of Wonderland, and so forth. The attempts to vary the pace are admirable, but in most cases, the execution is less than ideal. For instance, there are sequences in which you take control of a rolling doll's head and navigate in 2D and 3D alike. It's a neat idea, but the too-close camera and some awkward transitions in and out of third-person and side views frustrate. Running from a gigantic executioner should have led to pulse-pounding chases, but these sequences have you running toward the camera. It takes a special game to make it fun to run toward the unknown, and Alice is not such a game. An underwater shoot-em-up, a musical minigame--you might welcome the change of tempo at first, only to discover that these sections whistle a boring tune.

Fortunately, these are short detours, not core mechanics, and they are overshadowed by Alice: Madness Returns' better elements. It might take you nine or 10 hours to complete the game, and should you buy it new, you get a code to download American McGee's Alice. This port of the original PC game takes some getting used to: moving Alice doesn't cause her to face that direction. (Fans of the original will miss the ease of movement mouselook provided on the PC.) The action feels stiff by modern standards, but its dramatic art design and uneasy atmosphere are timeless. The Cheshire Cat fades into view, filling you in on the state of Wonderland while doing his best Alan Rickman impression. Instead of shooting pepper at the Red Queen's guards, you fling razor-sharp playing cards. And in at least one important way, the original still surpasses this late-in-coming sequel: it more effectively uses events and characters from the source material. And thus it is more likely to tap into your nostalgia either for Carroll's works or for their place in pop culture.

If you grab the game on the used market, you can still purchase American McGee's Alice separately, though you shouldn't assume that Madness Returns is a lesser value without the inclusion of the original. It's fun to move through Wonderland as if carried by a summer breeze, bringing a touch of beauty to its contorted imagery. It's a shame that the game never expands its fundamentals. Looking back on time spent with Alice: Madness Returns is like remembering a vacation from your childhood: you remember where you went, but not what you did. Yet Alice's broken psyche is so tortured, her waking nightmare so vivid, that you're tempted to push forward to see what deliciously morbid sights yet await. 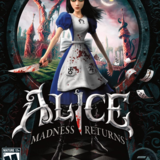