In execution, Alice offers some of the best graphics and gameplay ever seen on a portable system.

Almost fifty years ago, Walt Disney brought Lewis Carroll's Alice in Wonderland to life on the big screen. Featuring an outlandish story and visuals to match, it is no wonder that - even by today's standards - Alice remains one the most beautiful animated films of all time. Out of all the consoles on the market, one might think that a console such as the Game Boy Color would be the least technologically capable of re-creating the lush world of Wonderland. The developer Digital Eclipse is out to prove anyone who thinks that is the case wrong. In execution, Alice offers some of the best graphics and gameplay ever seen on a portable system.

In recent years, many Disney films have found their way to home consoles, single-handedly creating a genre of their own - the Disney platformer. Alice takes this formula a step further by not only offering simple side-scrolling action, but also an isometric view that kicks in once Alice reaches the main Wonderland area. In addition to single-player action, you can team up with a friend to take turns searching for the mysterious White Rabbit or use the optional Game Boy Printer to use Alice's Art Gallery, where you can arrange pictures of characters from the game and print them out.

Utilizing detailed cutscenes to carry the story along, this game follows the film's story to perfection. Beginning with Alice's descent down the rabbit hole, young and old alike will have no problem jumping right into the simple gameplay. While some sequences may prove to be frustrating at times, anyone with a small amount of patience should be able to enjoy the game all the way through.

During the course of the game, Alice will meet up with all of the major characters from the movie on the overhead-view Wonderland map. For the most part, these familiar faces have lost an item, and upon talking to them, Alice will volunteer her services to find what they are looking for. During these side-scrolling adventures, Alice is on the lookout for not only these hidden items, but the also the obligatory keys to open locked doors and, of course, magic mushrooms to shrink her down to tiny proportions so she can squeeze through small passageways.

Graphically, Alice is one of the most impressive Game Boy games of all time. Digital Eclipse has outdone itself in immersing the gamer in a world exactly like the movie, and it has pushed the hardware to its fullest, offering animated backgrounds and nearly every color in the handheld's palette. To add to the stunning visuals of the game, Alice and her Wonderland friends and enemies are also wonderfully animated, and they move almost exactly like they do in the film.

While Alice may be visually outstanding, the sound leaves a little to be desired. Most of the in-game music is kept simple and to the point. It gets the job done, but it's not nearly as impressive as the lush visuals of the game. It should be noted that this leaves only a small smudge on the game itself.

On the whole, Alice in Wonderland is an amazing Game Boy game. It offers some of the best graphics and animation ever for this system and should not be missed. Players running the gamut from novice to expert should thoroughly enjoy the game. In fact, it stands to leave a lasting impression, much like the film itself. 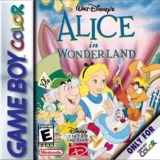