Alexander had the potential to be a quality strategy title, but poor execution makes the game not so great.

In this day and age, it's inevitable that a game will be created based on a high-profile action adventure movie. History tells us that these games stink for the most part, and Alexander, which ties in with Oliver Stone's movie of the same name, unfortunately falls into this majority. This conventional real-time strategy game attempts to follow Alexander the Great's campaign of conquest, but it is marred by sloppy development, factual inaccuracies, and a general failure to capture the scope of what made Alexander so interesting and unique to historians. The game does have the foundation to be a good strategy title, but this doesn't save it from the aforementioned problems.

As you can guess, the game takes place during Alexander's lifetime (356 to 323 BC). There is actually quite a bit of content here. The single-player campaign starts with the Macedonian viewpoint, which is Alexander's conquest, and then it lets you play as the other three factions of Persia, Egypt, and India. Their missions are varied and they can keep you occupied for quite a long time. Mission objectives are highlighted on the minimap and the goals are clear, which is desirable in any strategy game. There is also a skirmish mode for single- and multiplayer games against computer and human opponents.

The problem is that quantity doesn't make up for a lack of quality. Even if you disregard the historical inaccuracies (for example, the game places Parmenio in India, even though historians like Arrian tell us that Alexander had Parmenio executed well before then), the actual storytelling and gameplay are still poor. There are numerous spelling errors, shoddy writing (some archers are described as being the "same as the other archers"), technical issues, and occasionally horrible controls. All this seems to indicate that the game was rushed to meet a deadline that would coincide with the movie's release, which is unfortunate because the developer, GSC Game World, has produced good strategy titles in the past.

Since the game uses GSC Game World's engine, it looks and operates similarly to the company's Cossacks series. Real-time strategy basics apply where peasants construct buildings and harvest resources, which are then used to create military units. However, GSC games are rather unique in that there is a very high population limit and units are created quickly. This makes battles more intense because there can be literally thousands of units fighting on the map. Fortunately, you can arrange units into brigades, which can be controlled as a single unit. Brigades also confer stat bonuses and can be arranged into preset formations based on their behavior. The large amount of units are nice, because the scale of warfare feels more realistic than the average strategy game, which usually only has dozens of units onscreen. However, it's not always so nice when the units are difficult to control.

The inherent problem with the game is that units often disregard orders. Units will gleefully run into battle on the aggressive behavior setting as you'd expect, but oftentimes they will ignore your order to retreat. You can sometimes get them to retreat if you change their behavior to defend; but even if it does work, it's annoying to have to do this. It's especially frustrating when hero units run into battle, won't retreat when you give the order, and subsequently die, forcing you to restart. Another issue is that cavalry and infantry will move at the same speed when grouped, but siege equipment will not. Somehow siege equipment will move faster than foot soldiers. However, looking past that issue, it's troublesome when siege units get ahead of your army and are then destroyed. That's assuming the units move in the first place, as your units often won't move at all. You may tell a large group of units to move, yet a few of the brigades will mysteriously sit there and do nothing. All of these glitches make it very difficult to control the flow of the game, which is obviously important in a strategy game where you need to quickly order units to key locations.

For what it's worth, there are some good qualities here. Idle peasants will automatically find work if left alone, and the game will tell you how many peasants are working on each resource. Pathfinding is generally decent, although sometimes units will go the wrong way and get stuck. The computer opponents will put up a tough fight in both campaign and skirmish modes. And as already mentioned, it can be awesome to throw thousands of units against an opposing army numbering in the thousands. It's unfortunate that basic control problems ruin the rest of the game.

Multiplayer is available on LAN and the Internet through GSC's game browser. The browser is functional, but it doesn't have any advanced player-matching abilities. There is some statistical tracking that shows people have been playing, but only a few players were online when we logged in during a week of testing, so don't expect a bustling community. The multiplayer action itself is typical of the genre. You'll build your base and your army and then attack the enemy, and the victor will be the one that managed his economy and/or made better strategic decisions along the way. You can build hero units in multiplayer as well, and unlike in the single-player game, they can die and be rebuilt like any other unit. Again, though, control problems fundamentally undermine what could have been a much more entertaining, full-scale RTS experience.

The game may not have cutting-edge technology, but it still looks nice. The terrain and environments are pleasant to look at, though water appears a little too reflective. The fog of war also looks good (it appears as a swirling gray fog outside your field of vision). There are some other fine effects, such as walls that crumble as they take damage. Animations are simplistic, but since you'll mostly be playing from a zoomed-out perspective, this really doesn't detract from the gameplay. On the other hand, extreme issues with the frame rate during some of the larger battles can definitely get in the way of the action. The sound leaves something to be desired, too. The sounds of battle are OK, but there are no unit acknowledgments and the voice acting during campaign missions is poor.

It's too bad that the game has these numerous shortcomings. The thought of commanding Alexander's army in his famous battles is exciting. But the game doesn't even get this right. Part of what made Alexander so great was his military genius and his ability to achieve victory against all odds. You never get this feeling in the game, though. Even in the battle of Gaugamela, where Alexander's army was vastly outnumbered by the Persians, the game has you and the Persians on practically equal footing. All you need to do is order your army forward and you win; there is no strategy involved. As such, it's unfortunate that the developer couldn't spend more time with the game to truly make it fit its namesake. The game's poor execution means that real-time strategy fans would be much better off playing any number of other, similar games. 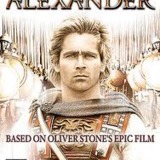