Wake's journey gets less creepy and more shooty in the fun but flawed American Nightmare.

The constant tension of waiting for the next shadowy axe-wielding horror to leap at you from the darkness made Alan Wake's debut a pleasantly nerve-fraying jaunt to the Twin Peaks-esque town of Bright Falls. Marvelous narrative pacing and a brains-over-blood-spray approach gave Wake's memorable thriller journey through demonic woodlands and twisted townscapes loads of impact. It's a shame those same thrills and chills are mostly absent in American Nightmare, replaced instead by morbid humor and a lighter-hearted narrative. The dusty Southwest setting and a bigger emphasis on gunplay are among several new elements that keep the formula from getting stale, but this diversionary side trek is a very different animal from the proper story-continuing sequel players are hungry for.

Though it ties in loosely to the series' nebulous overarching plot, American Nightmare plays out as a stand-alone episode of Night Springs, the franchise's well-done spoof on the classic sci-fi TV Show The Twilight Zone. The game further plays on the yin-yang themes of light and darkness that permeate the original Alan Wake and its downloadable content add-ons. Wake is cast in the role of the Champion of Light as he struggles to thwart his doppelganger-turned-nemesis Mr. Scratch.

Their frequent interactions set a pleasantly demented and comical tone, thanks to Scratch's maniacal ramblings and murderous vignettes that pop up on TVs scattered around the three main settings you trek through. Wake himself even takes an amusing "yeah, yeah, been here before" stance at times, which fits well with the way the latter half of the tale spins out. This overt goofiness is balanced out by the urgency of Wake's situation. Scratch can hop between the real world and the dark realm Wake is trapped in. He's set on getting his hooks into Wake's wife Alice and takes every opportunity to taunt the frustrated protagonist as he gets closer to achieving his malicious goal.

The clever story is penned with many of the reality-warping twists that made previous installments so enthralling, but there's a lot less exposition here compared to Wake's past jaunts into the darkness. That's disappointing, because moody storytelling helped set the tone that made Alan Wake so captivating. It's not that what's here isn't good--it's just on the skimpy side. Despite fitting neatly into the story itself, the cyclical, repetitive nature of the latter half of the campaign's trajectory grinds away at the fun in the home stretch, and a puzzling reliance on fetch quests doesn't help matters much. Hunting down manuscripts to unveil portions of the story returns once again, yet the task has a cool secondary purpose this time around. Collecting enough manuscripts lets you open special strategically placed lockers that hold more powerful guns to boost your firepower, which works hand-in-hand with this episode's determined push into more action-focused territory.

American Nightmare's different flavor of intensity comes less from the brooding atmosphere than from the fact that there's a lot more stuff out there trying to kill you. The Taken are back in full force, and there's a far better mix of foes to blast apart. Some new adversaries, like nasty giant spiders and big hulking brutes carrying heavy buzz saws, are thrown in for more visual variety, while a few special Taken force you to change your combat strategy. One variety splits itself into two separate creatures when it's first hit, which can quickly turn a more manageable group of foes into a small army. Another takes the shape of a flock of crows, zipping down from the skies and taking humanoid form to surprise attack from behind. They're a big improvement that round out the familiar enemies returning from previous installments.

As before, most foes must be weakened with your flashlight, a road flare, or some other light source before they're vulnerable to attack. While it's a bummer that you have fewer opportunities for creatively using light to take down enemies, there's more raw firepower kicking around, which readily scratches a different itch than what you'd expect from the series. Picking up a hardware-store nail gun and piercing a nearby enemy's face full of sharp projectiles does indeed make you feel like a real badass. Other cool killing kits, such as a crossbow, a sawed-off shotgun, a Magnum, a mini-Uzi, and an assault rifle, offer plentiful and satisfying new ways to dispatch the nocturnal horrors that come crawling at you.

Struggling to scavenge every piece of crucial gear to stay alive injected a genuine sense of fear into the original game that grew addictive. Not so much here. Bullets and batteries are in such plentiful supply that you never run out, and it makes American Nightmare a much weaker experience. It's hard to capture that same feeling of terror when you can jog on over to the nearest ammo dump to resupply in a heartbeat. This neuters both the tension and much of the difficulty. What's left is a decent shooter with a great story that doesn't live up to the glory of the first game.

The one area where this overemphasis on combat is absolutely welcome is in the new Fight 'Till Dawn arena mode. You're dropped into large enclosed stages flooded with waves of Taken sneaking in from all directions, and your goal is to survive until the sun comes up and kill as many beasties as you can to rack up a high score. The simple, straightforward arcade survival action is a lot of fun. It's worth hitting the campaign first, since collecting pages and unlocking weapons open them up for use in these challenging arena battles.

American Nightmare is a more streamlined affair that lacks the weight and impact of its predecessors, and is the least creepy entry in the multifaceted saga. While that's by design, the gritty action focus and scaled-back story don't jibe as well with the series' overall atmosphere. The adventure boils down to a flawed but entertaining pit stop with some cool moments to tide you over until the next proper full-length installment. 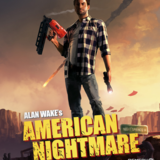