Yu Suzuki has been making games longer than most of us have been playing them. Today he is best known as the creator of Shenmue, but he has a long history of innovating in arcades with titles like 1985's Space Harrier and the Virtua Fighter series. Air Twister on Apple Arcade represents a return to his arcade origins while also taking some lore and story lessons learned from Shenmue. But overall, the experience ends up feeling repetitive without being particularly rewarding.

Air Twister begins strong with playable protagonist Princess Arch responding to an alien invasion threat on her home planet. She soars through the air alongside gigantic swans flying past massive mushrooms to a soundtrack from dutch composer Valensia that truly sounds like nothing I've heard in a video game. The visuals and music are a joy to take in, but the repetition stagnates the experience quickly as every playthrough (and there are a lot of playthroughs) is identical.

Combating the alien invasion takes the form of an on-rails shooter that feels like a cross between Panzer Dragoon and Star Fox. As you fly forward you tap the screen to fire at enemies, or swipe across them to lock on to a handful and launch a collection of homing attacks. I found using a controller to be much more manageable, as it made moving Princess Arch out of the way of attacks while still locking onto enemies easier. I never found this style of play to be particularly compelling and during the last few levels I found success by just tapping the fire button repeatedly and moving Princess Arch constantly in random directions to dodge attacks, which wasn't strategic or interesting.

Progress through the game's 12 levels comes from starting over from the beginning every time you die and using experience earned to unlock small upgrades to help you get further next time. Unlocks are handled via a gigantic map with various paths you can follow, which is a fine way to give the player some choice and visualize progress, but the layout means you have to spend experience on too many unlocks you don't care about to get to the ones that are helpful. Hearts that give more life are some of the most useful, but I had to spend experience on clothing, hairstyles, and make-up I would ultimately never use, just to extend my life a little bit. The best unlocks are a handful of improved weapons and shield accessories, but it takes a long time and far too many playthroughs to reach them.

With each unlock comes a lore entry about the world, Princess Arch, or the enemies you're fighting. I enjoyed unlocking and reading these little bits of information, as the world is surprisingly fleshed out, interesting, and sometimes funny. Arch is apparently an expert at a sport called Flying Cucumber, which is what makes her so good in the air with a gun.

A few additional Challenge Modes exist alongside the main game. They are mostly variations on playing the core campaign, but without the experience rewards and it makes them feel like time wasters. Fluffy mode changes the perspective and has some paltry experience reward incentives, but after awkwardly navigating through a maze to collect stars once, I felt no need to revisit it.

Air Twister is fun to look at and I will be listening to the strange soundtrack outside of the game. There are moments, like the boss fight where you ride on the back of a flying elephant while combating a giant grandfather clock that spits out smaller clocks, that are creative and silly in a way I enjoy. Unfortunately, I rode on the back of that elephant and killed that grandfather clock dozens of times on my way to finally defeat the alien invasion, and by that time, the whole experience had become far more tedious and redundant than fun. 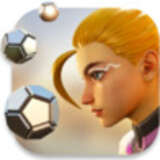 Kyle played enough Air Twister to unlock 17 different hairstyles and for Princess Arch to hang up her weapon and declare, "The invasion has ended and the planet is saved!"