Three ugly character models sit around a fire: an unblinking man in a suit with his arms locked at 20-degree angles from his body; a dwarf that stole Catwoman's mask; and a zombie with its fists clipped through a chair yanked from a tavern in World of Warcraft. These creatures seem like refugees from three different 90s-era games, but they're apparently the CEOs of airlines currently at war. Airlines that count doctors that strew entrails about their planes' cabins among their passengers.

How a developer would think to ask money for this travesty is unfathomable. The horrors begin with the main menu, where you discover that the mouse cursor and mouselook are simultaneously active, so that when you choose one of Air Control's modes, you also move the camera around. The background shot is of an underwater airplane, above which sits the game's title in a blurry font. That title doesn't sit in the interface, however. No--it simply sits above the aircraft as though the letters exist within the game's own world. Clearly, something's amiss, and if the main menu isn't enough to convince you, then the abominable zombie-human-dwarf cutscene that opens Casual Mode certainly should be.

The mess that follows is homely, unfinished, and inept. By default, an inexplicable array of buttons labeled "lock cursor" are strewn across the screen. You can remove them by clicking the "disable [lockcursor] UI" button at the top left, though that particular button needlessly remains in all its unsightliness. Remember: any cursor movement is accompanied by complementary mouselook, so interacting with the interface causes the camera to move wildly about. In this case, it's an airplane interior that dizzily rotates around you as you turn off the interface and guess at what your goal is. As it turns out, you're a flight attendant, and the big red sentient exclamation mark at the rear of the plane has a task for you: deliver some coffee to a passenger in the front.

Your next task is to pick pillows up from the floor, which means moving the mouse cursor over them and clicking them, a rather uncomfortable task if the mouse cursor has moved to the edge of the screen, as it just may have by this point. And so you point and click on the pillows, which simultaneously changes your point of view so that you're facing the passengers to the left. You might try to hit the escape key and try to restart the level, or abandon this rubbish altogether for a different mode, but doing so in any of the game's modes causes the mouselook and movement keys to stop functioning, and in some cases renders the level entirely inoperable.

Casual Mode plays out in a series of bizarre levels, most of them only a few seconds long, that have you moving from the back of the plane to the cockpit (yes, that's it), picking up a gun and shooting a terrorist, picking up trash bags, or performing some other mundane task. Every one of these activities is awful. Passengers sit in a catatonic state with their arms held stiffly in place. Terrorists don't move or animate in any way, and explode when they die. Sometimes there are weird colored cubes on the floor for no reason. In one ludicrous level, there's no gravity, and the game displays only a few frames per second. And every nonsensical task is accompanied by peculiar descriptions written in broken English. "You need to find reason while airplane fell down" says one dialogue window, right before you discover that ending the mission requires… opening a door. "You can open your inventory with a button situated in left" says another, even though there is no inventory button, on the left or anywhere, and the mission gives you no reason to have one.

You also get to be a mechanic, which means hovering over some buttons until one turns red and you click on it. More often, you get to be a pilot, both in Casual Mode and in Killjoy Mode, but piloting an aircraft in Air Control is a farce: the controls make no sense, the camera angles make no sense, and if you crash, you have to quit out of the game and restart it due to the aforementioned broken menu options. Crashing into the sea is particularly fascinating, as the water is actually a solid object; how the aircraft in the main menu managed to sink is a mystery.

You shouldn't forget Realistic Mode, in which you walk around in an airplane cabin filled with petrified character models while cursing the ridiculously low frame rate, and then do nothing because that's all you do in this mode. To be fair, though, doing nothing is preferable than wasting your time on this wreck, which advertises itself on Steam as "the best flight simulation in the history of computer games" and promises that it is "the first airplane game, where plane compartment is visible." Both of these claims are lies, of course, which only makes sense for a broken scam masquerading as a computer game.

View Comments (337)
Back To Top
1
Abysmal
About GameSpot Reviews 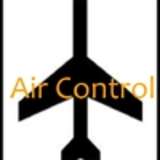 Kevin has a fear of flying. But he now fears flying in Air Control even more. He spent two agonizing hours with Air Control, even though you can see everything in under 30 minutes.