The fifth and latest in the long-running Age of Wonders series is the first to trade in the staple high fantasy setting for a sleek and shiny sci-fi theme. Despite the change of scenery, it remains true to its roots, delivering a very good hybrid between turn-based tactics and 4X strategy game that is at its best when it focuses on people--both the people you meet and the people you send to war.

4X strategy games tend to present the lands they ask their players to explore, expand, exploit, and exterminate as uninhabited. It's common to begin a new game with a settler unit and the implicit promise that this is a world yet to be settled. It's there for the taking. The colonialist fantasy extends to indigenous populations, if they exist at all, being treated as incidental. At best they are neutral props without any ambition of their own; at worst they are nothing more than vermin to be eradicated.

Age of Wonders: Planetfall offers a different perspective. Instead of conquering a new world, you are returning home ages after a calamity drove your ancestors away. There is still war to be had, there are still peoples to displace--this remains a 4X game in the Sid Meier tradition. But in the light narrative touch of a quest system that gives voice and purpose to everyone you meet, there are moments of reconnection and rediscovery. In a sense it becomes a 5X game, allowing you to exhume and reclaim traces of your civilization's history.

This emphasis on archaeology is more prevalent in the surprisingly substantial campaign mode than in the randomly-rolled maps of the scenario mode. The 13 campaign missions, which let you play as all six of the game's half-dozen factions, are peppered with scripted story beats that succeed in fleshing out the history of and relations between the various civilizations. Visit a foreign colony and you might trigger a conversation between your commander and another faction leader in which you're asked to perform a quest to gain their favor. Later you might encounter a third faction who promises you some vital insight into your own objectives in return for betraying the friendship you recently forged.

Such choices are fraught. Each faction, even the minor indigenous ones, is busy cultivating relationships with the others, and it soon becomes clear that every new decision you make will ripple out and meaningfully affect your standing in the world.

The random scenario mode can't rely on the scripted story of the campaign, but each procedurally generated map still supports the same dynamic quest system. One faction might task you with helping them complete some important research, while another urges you to hunt down a pack of troublesome enemies pillaging their lands. Such quests not only keep you engaged with interfactional diplomacy but also serve to provide clear motivation for exploring new areas and expanding your borders in specific directions.

Regardless of whether you opt for the campaign or a scenario, you begin with a single settlement and gradually take over adjacent sectors to secure access to their resources. You build military units to go to war or to protect your newly acquired holdings. You colonize unclaimed sectors and upgrade them to specialize in supplying your colony with food, energy, research, or production. You have to get your head around the unintuitive sci-fi names of many technologies, structures, and units, but hover the mouse over Kinetic Force Manipulation to bring up the tooltip and you quickly realize it simply means "Better Guns."

Indeed, it's all fairly straightforward for anyone who has played Civilization or dabbled in the strategic layer of a Total War, though sometimes it does feel like expansion decisions are not really choices at all. When faced with the prospect of expanding into one of two possible sectors, you're always going to pick the one that receives bonus production from its quarry over the one that offers no bonuses of any kind. Occasionally you'll have to weigh the benefits of one resource over another, but they aren't genuine either/or choices--they're more akin to whether you need that food-rich river sector now or whether you want it a little bit later.

Among the structures you can build with a colony, there's also a disappointing lack of variety. Most of what you can construct are incremental upgrades that boost resource production while unique buildings, like the world wonders in Civilization, or anything that truly changes your style of play (rather than merely accelerating it) are felt only in their absence.

More interesting decisions arrive in combat. Armies can contain up to six units and are lead by a hero unit commander. When two or more hostile armies meet on the world map, combat is resolved via a remarkably full-feature XCOM-style tactical battle. Every unit can move individually, take partial or full cover, attack in melee or at range, and call upon a number of specialized abilities. The range of options at your disposal here is dizzying.

Each unit can be outfitted with primary and secondary weapons and up to three ability mods earned through quest rewards or unlocked on the tech tree. You can apply a template to all units of the same class, so that newly recruited infantry, for example, will all have increased accuracy and healing. But if you're like me, you'll enjoy rolling up your sleeves to customize every single unit in your army. Adding to the complexity, hero units can learn skills that not only enhance their own abilities but confer buffs to the units they lead.

I loved having the authority to develop specialized armies. In my current game, I have one army composed of snipers led by a commander who uses mind control debuffs and a second army focused around a melee tank supported by defensive grunts who can throw down portable cover anywhere on the battlefield. The degree of customization allowed is both flexible and powerful.

This sort of specialization matters because you can bring multiple armies into the same fight--and indeed, it becomes essential as you encounter tougher armies into the mid- and late-game. Any army on the world map that is situated adjacent to the hex where combat is initiated will be drawn into the conflict. Thus, a huge part of the tactical considerations at work here comes from maneuvering your troops to outnumber the enemy. Combat can be auto-resolved, allowing you to either watch the AI simulate the tactical battle or skip straight to the outcome, but doing so results in unnecessary losses in all but the most lopsided contests.

Overall, Age of Wonders: Planetfall is a robust package for 4X players who want to test themselves against a more in-depth combat system than is typically found in the genre. It suffers a little from its sci-fi setting making things just that little bit harder to relate to than, say, actual human history, but it compensates by creating a cast of fictional alien civilizations that are worth getting to know. It might not quite feel like home at first, but you'll quickly settle in.

View Comments (27)
Back To Top
7
Good
About GameSpot Reviews 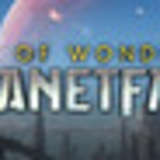 David Wildgoose was very disappointed with Firaxis' Civ: Beyond Earth from a few years back and thinks Planetfall does a much better job emulating the spirit of Alpha Centauri. He played through the campaign and a handful of scenarios across around 30 hours.