A mix of real-time and turn-based conventions makes Age of Empires: Mythologies an addictive venture into the ancient world.

Turn-based strategy gamers in need of a fix should probably drop their PCs and pick up a Nintendo DS if they haven't already. The genre is thriving on the handheld system these days, with games like Age of Empires: Mythologies and Civilization Revolution and the Advance Wars series leading the way. Griptonite Games has done a terrific job with this sequel to 2006's Age of Kings, reimagining another Ensemble Studios oldie but goodie with enough depth and detail to satisfy the most discriminating strategy purist, while remaining accessible to neophytes.

This is a hybrid of traditional RTS gaming, like that in the classic Age of Empires games for the PC, and of old-time turn-based strategizing seen today largely in DS games such as Advance Wars. RTS influences include the three complementary factions--the fierce Norse, the jack-of-all-trades Greeks, and the defensive Egyptians--and the need to build settlements and gather resources. Villagers are employed to construct various buildings to help your civilization thrive. Mills are used to process wheat, barracks and stables produce and enhance various units, and shrines generate god powers. This sounds like a typical RTS, although the game plays out in turns. Each day you erect buildings, crank out spearmen, archers, cavalry, and the like, and then shuffle them around the map into battle positions.

In many ways you have the best of both worlds here--the tried-and-true design conventions of an RTS along with the more measured tactical considerations of being able to dole out orders in turns. The depth is tremendous, especially for a handheld game. The three lengthy single-player campaigns tour through the factions in historical order. You can also take on solo skirmishes and a selection of scripted scenarios for each faction, or battle up to three other players locally or online via Wi-Fi. Map design and objectives are fairly predictable in the campaigns and the scenarios, although everything moves along pretty quickly. If you like traditional turn-based gaming, you'll like what is on offer here, even though you won't be blown away by any innovations to the genre. Sieges are the main annoyance. They tend to drag on too long and turn the otherwise crisp and clean graphics into mobs of colored blobs where it's just about impossible to see where your camel ends and the enemy's spearman begins.

A rock-paper-scissors formula has been followed for combat, so there isn't any reinventing of the wheel in battles. Still, a lot of features have been crammed into one tiny DS cartridge. Factions are loaded with unique touches that give the game a serious historical/mythological flavor. Culture-specific units such as the Egyptians' camel cavalry and the Greeks' hoplites make those races very distinct, and the legendary fighting prowess of the Norse is underlined by the way they curry the favor of their gods through battle (no temples or obelisks for these guys). Special abilities and units are granted by the gods every time you advance to another of the game's four ages. As the Greeks, for instance, you start off worshipping Zeus and taking advantage of his Thunderbolt skill and then add a minor god, such as Athena and her restoration healing ability, every time you move ahead an age. Heroes like Heracles and Hatshepsut can also be sent into the field of battle, and special myth units, such as the powerhouse Egyptian sphinx, can also be recruited.

Mythologies blends its two genres into a smooth and elegant presentation, and the visuals are beautiful. Unless you're in the close-combat situations of a siege, you can always tell one unit from another and even spot sharp little touches like the swishing of a sphinx's tail. Audio is quite limited, which is probably to be expected given how many features were shoehorned into the cartridge, although there is just enough variety in the music and the unit acknowledgements to keep you from getting annoyed. Commands and unit navigation are handled with the stylus on the bottom screen. A few minor responsiveness quirks interfere with the functionality at times, especially when you're trying to change the camera location by dragging the map, although all in all it's a good attempt at replicating a mouse-oriented PC interface on a handheld. The top screen is mostly used well, displaying information tidbits like unit stats and battle animations. You can also flip this screen to a detailed overview of the entire scenario map that you're currently playing, complete with icons denoting the locations of all units, buildings, and resources. It's a bit of a shame that this map isn't shown on the top screen at all times, though, as it is a pain to have to pull it up. A lot of space seems to be wasted on the top screen, so it likely would have been possible to cram a map in there without crowding out too many stats.

Let's hope we don't have to wait two more years for another addition to the Age of Empires family on the DS. This franchise might not have a lot in common with the PC games upon which it is based, but it has more than enough magic to keep you playing just one more turn for many hours. 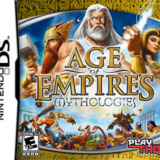 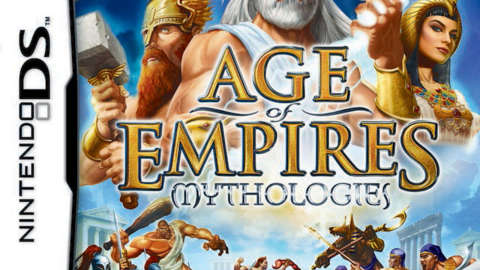 Age of Empires: Mythologies features three civilizations to choose from and multiplayer support.