You're better off reading a book than playing this flawed interactive crime novel.

Grab a dollar bill and flip it over. See that creepy eyeball with beams of light shooting out from atop an unfinished pyramid? That's the Eye of Providence--a religious icon representing the ever-watchful eye of God. While it's an eerie symbol on its own, it takes on a far more sinister role in Again, where it's used as the calling card for a serial murderer hell-bent on re-creating a string of grisly slayings from the past. Billed as an interactive crime novel, Again has all of the makings of a decent detective tale sprinkled with a touch of the supernatural. Unfortunately, it struggles with sluggish pacing and occasionally ham-fisted delivery. Even for enthusiasts of interactive stories, tapping through hours of text broken up by a handful of obtuse crime scene investigations that require frequent backtracking will test your patience more than your mind.

Again's story straddles the present and the past. Nineteen years ago, the city of Clockford, Pennsylvania saw a string of brutal murders in a short time span. Because of the range of victims, locations, and murder weapons, these killings seemed unrelated--save for a small cutout of the Eye of Providence left at the scene by the killer. The murders went unsolved, and the case was eventually closed. Almost two decades later, the Eye of Providence resurfaces along with a bloody message promising that those gruesome events will all happen again. You play as J. Weaver, an FBI agent with close personal ties to the original killings, who develops the unusual ability to see the original crime scenes simultaneously in both the past and the present. Working with a sassy partner named Kate Hathaway, you reopen the case in hopes of tracking down the killer before history repeats itself. Considering that Again was made by the same developer responsible for Hotel Dusk, it's a shame the story isn't nearly as well told or as interesting. The frequent shifting between references to past and present murders often makes it hard to follow what's happening at important points in the game.

If the phrase "interactive crime novel" doesn't immediately pique your interest, then much of Again's slow-paced gameplay is going to feel like torture. Throughout the bulk of the case, you zip back and forth between locations around Clockford by selecting places from a menu. New locations open up as you progress through the story, and each hotspot has different people to interact with. Interviewing suspects, seeking advice from colleagues, and talking to other individuals in your hunt for leads in the case is a protracted process laden with lots of back and forth drudgery. While the dialogue has been chopped into short bursts that are quickly cleared with a tap of the stylus, back-to-back conversations can go on for an excruciatingly long time. You'll also have to revisit many spots a few times to get people to cough up the details you're searching for or trigger a specific event that allows you to proceed. This makes the stretches of time in between the more interactive areas of the game feel drawn out. The only salvation from this incessant deluge of menu navigation and text scrolling arises when you dig into a crime scene and J's psychic powers kick in.

Crime scene investigations are a great change of pace at first, but their novelty quickly wears off. J's ability to see the past and present in these locations yields an interesting but not altogether unfamiliar gameplay mechanic. With the DS held on its side like an open book, one screen will show the crime scene as it was 19 years ago, and the other will show it in the present. Exploring both scenes simultaneously in first-person, you'll spot the differences between the two and psychically tune in to key items in the scene to piece together clues about what happened there. You hold the D pad to walk, and manually tapping and dragging the stylus on the touch screen turns you around as you move. The stylus-look controls are slow and imprecise, making navigation a pain. Once you've plodded around and gathered all the pieces in a given area, you must figure out what has to be done to make the present match the past in order to reveal the truth. This isn't much of an issue early on, but these objectives grow harder and vaguer as the game progresses. It's also not initially clear that some stages require you to leave the crime scene and interview additional individuals you've already spoken to, before returning with the right items needed to trigger hotspot sequences. Getting stuck for a long period of time until you come to this realization is maddening. It's even worse when you closely investigate too many of the wrong elements, draining your psychic meter in the process, and are forced to restart the area multiple times before figuring out the right combination.

One of Again's highlights is its distinct visual style. Instead of using hand-drawn characters, the game features snippets of digital animations taken from video-capture sessions with real people acting out the parts. As the dialogue sequences play out, the people talking will make brief movements, shift position, and act out realistic expressions. It's not entirely fluid, and some of the facial expressions are overdone to the point of being comical, but this very different approach to character art makes this area of the experience stand out in a good way. The first-person crime scene investigations are also nicely designed. Though the locations are not as visually extravagant as those in some first-person games on the DS, they are appropriately gritty and fitting for the subject matter.

Aspects of the story and character interactions are enjoyable at times, even if both of these areas in Again are loaded with detective story cliches. It's not hard to get sucked into the hard-boiled premise and the first hour or so of the investigation, but the awkward and clunky way the game progresses from there won't keep you glued to your screen. The whole thing is reading intensive, which wouldn't be a big deal if the story was more engaging or the gameplay did a better job of balancing the long, dull stretches of monotonous character interactions with something more meaningful than walking around confined areas poking at objects until you find the right ones that match the situation. Spend more than a few hours in this crime story, and you'll have a hard time mustering the desire to come back to Again. 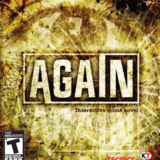