As a semi-omnipotent being, you are responsible for laying out a functional heaven and hell to reward or punish the denizens of a strange planet.

Afterlife represents one of the most unusual videogame concepts to ever make it to store shelves. As a semi-omnipotent being (I know that's a bit of an oxymoron, but this game's full of things like that), you are responsible for laying out a functional heaven and hell to reward or punish the denizens of a strange planet. To do so, you must keep an eye on the most common sins and virtues of your people (who look a lot like the monsters from Critters), the balance of temporary to permanent souls in each of your buildings, and more mundane tasks like the building of roads and training facilities. For each soul you process you are rewarded with pennies from heaven, which may in turn be used to purchase more edifices and services.

Once you've dived into the game, there's a lot of interesting things to experience, including a view of the planet itself that shows you what the living beings are up to, tons of hysterically funny rewards and punishments (my favorite is heaven's “The Good Spot,” a parking lot in which you can always find a great place to park), and an amazing soundtrack that features everything from disco music to bizarre arias. Helping you make your decisions are an amazingly (even sickeningly) cute angel character named Aria, and a more conservative (and slightly sarcastic) demon called Jasper. These two characters provide an excellent way to stay in touch with what's going on in the game, and add flavor to the already humorous atmosphere of this title.

Afterlife has a few other serious problems as well. Although the game looks pretty good most of the time, players who choose to zoom in to the closest viewpoint will be treated to a grainy, pixelated mess instead of a display. Certain structures, like those used for creating power, cannot be turned on or off, making it sometimes impossible to determine whether you can or can't build in certain areas. But the worst problem of all is in the one area where LucasArts did decide to deviate from Maxis: the lack of useful documentation. While a small booklet explains the basic functions of each of the game's buttons, and a tutorial will get you through the first few problems that you'll face, you'll need to cough up about $15 for the Afterlife strategy guide if you really want to know how buildings interact with each other or the various values of different property types. When you've got the guide, you'll find it provides little than the information that should have been included in the manual in the first place.

In the end, Afterlife's incredible sense of humor and great story development made me like it despite its multiple flaws. Those who don't mind fighting a little with an interface or coughing up a little more cash for a hint-book in order to get a good laugh should definitely give it a look. Fans of economic simulations looking for a new challenge are almost sure to be wholly disappointed. 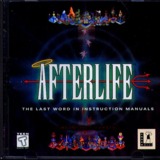