This gory, gorgeous action game has plenty of flaws, but it will still satisfy your thirst for blood.

Nariko in Heavenly Sword. Cloud Strife in Final Fantasy VII. And now Afro Samurai. These are the characters that you remember for their remarkable hairstyles, though Namco Bandai's newest hack-and-slash action game offers more than just a curly coif that reaches for the heavens. It is an entertaining and thoroughly gory offering that contrasts sumptuous environments and crisp cel-shaded characters with shocking sights of slow-motion dismemberment. In Afro Samurai, you'll chop ninjas in half and watch their disembodied torsos drag themselves along by the arms until they collapse in a pool of blood. Sights like these make for some wickedly satisfying combat, though in other areas, the game falls noticeably short of the standards set by genre predecessors such as Ninja Gaiden and Devil May Cry. Clumsy platforming and pacing inconsistencies keep Afro Samurai from reaching its potential, but the entertaining combat and dedication to its subject matter keep it from being just another forgettable button masher.

If you're familiar with the Afro Samurai anime, you'll undoubtedly enjoy experiencing the events depicted in the series, as well as several that aren't. If you're new to the franchise, the most important thing to know is this: You are a big-haired, cigarette-chomping dude who knows a thing or two about blades. This is a revenge tale, and as Afro, the wearer of the Number Two headband, you're out to defeat your father's killer--the current Number One. Even if you're not familiar with every character (the neurotic, potty-mouthed Ninja Ninja; the demure Okiku), the game's vibe has a way of pulling you in. Split-screen sequences in and out of combat embrace the game's anime theme; a fantastic hip-hop soundtrack tinged with Far Eastern harmonies enhances every slice and dice; and energetic voice acting from Samuel L. Jackson and other recognizable talents lends humor and gravitas in turn. Afro neophytes may not be drawn in by the plot, but they'll find it hard to escape the lush but violent atmosphere.

At the forefront of this vibe is Afro Samurai's combat, which cribs from most games of its type. You can issue weak and strong attacks, kick your enemies around, and string these three basic moves into a variety of combos. You'll spill a lot of blood using these simple actions, but if you really want to punish your acrobatic foes, it's better to enter focus mode and watch the guts fly. With a pull of the trigger, you can slow down time, adjust your blade's trajectory a bit, and lop heads, digits, or entire limbs off of your smack-talking enemies. You have to charge up focus mode by landing combos, but you will never go without the ability for long, and the resulting mix of old-fashioned button mashing and focus-powered slaughter is satisfying and fun. A few other moves help mix things up, such as sprint attacks, parrying, and bullet deflection (tricky to time properly but well worth the trouble). As long as you're facing a typical crowd of ninjas and a miniboss or two, it's all a drippy delight.

Once you're outside of combat (an all too frequent occurrence), Afro Samurai trips over its own feet, thanks largely to unpleasant platforming mechanics. The inelegant jumping sections are easy to stomach in small doses, but they're strung into long and frustrating sequences late in the game--one of which you have to repeat if you die at the hands of the boss that appears afterward. You can wall-run here and there, and leap up and grab certain ledges, but as a rule, you can perform these moves only when the game wants you to, and they're purely for getting from one spot to the next. You can't string them into combat moves a la Ninja Gaiden, and rough animations make these acrobatics look as awkward as they feel.

This leaves the burden of entertainment purely on the combat, and it's usually up to the task. At its best, Afro Samurai keeps pushing you forward, throwing a few different types of foes at you and tossing in various objectives, such as throwing foes into an electrical apparatus or flipping a switch here and there. A few set-piece battles are also a total blast, particularly an exhilarating freefall sequence that might leave you breathless. A couple of boss battles are good fun as well, such as one versus an endlessly self-cloning rival, and the easy but moody final boss battle. Some levels, such as a protracted fight versus Kuma, are lighter on combat but succeed thanks to pensive ambience, entertaining scriptwriting, and pure artistic splendor.

But as brutally beautiful as the combat is, it can't support the weight of some inconsistent pacing and the less appealing boss fights. In some levels, you'll wander around without encountering enemies for far too long; in a few others, nonstop waves of enemies will make you scream for variety that never comes. These issues come to a head in the penultimate level: The combat, normally a head rush, gets a bit tedious, the platforming takes center stage, and a few broken checkpoints might force you to replay sequences that you've already plowed through. The boss fights afterward aren't much of an improvement, spamming some cheap moves rather than providing a true challenge. The camera certainly doesn't help matters; it isn't completely broken, but it has a tendency to get hung up behind objects in the smaller combat areas or jitter around if you move it into certain positions. A related oddity is the lack of camera customization. You can adjust the Y-axis settings but not the X axis, which means that you are forced to deal with inverted camera settings when moving it from side to side. If you prefer standard settings, this frustration will simply exacerbate the other camera issues.

Nevertheless, Afro Samurai is an appealing game, and its visual style and pulsing soundtrack drives this success. The art style doesn't rely on simple cel-shading, but rather infuses this familiar technique with soft colors, muted lighting, and crosshatched textures. It's a unique look, and the gushers of rust-hued blood contrast nicely with the gently lit environments. When you enter focus mode, most of the environmental color washes away, making the gruesome cleaving of a bare-breasted ninja a bloody sight to behold. Jittery animations and other technical flaws can get in the way--particularly in the PlayStation 3 version, which suffers from minor but noticeable frame-rate drops, especially during split-screen incidents--but these rarely detract from the appealing visual design. Likewise, the occasionally lackluster sound effects can't detract from a superb hip-hop soundtrack (inspired by, as opposed to composed by, rapper RZA) and fantastic, lively voice-overs.

Its flaws are noticeable, but Afro Samurai is ultimately a lot of fun. It isn't the next action classic, but it embraces its subject matter with vigor and delivers equally dynamic combat in spades. You can squeeze a good seven hours of enjoyment out of the experience the first time around, and hidden items and ensuing unlockables may drive you to return, if the fun and ferocious combat isn't reason enough. In other words, it's a problematic but ultimately worthwhile reason to don the Number Two headband and see that justice is done--and that Justice is done in. 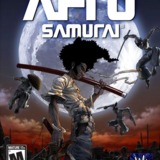 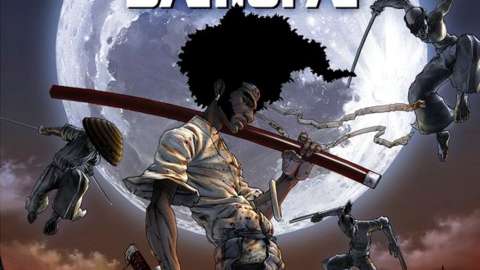 Play as the titular samurai and seek vengeance through gory, balletic swordplay.