AFL Live offers up a fun game of Aussie Rules that gets the basics right but little else.

Australian Rules Football video games have a long history of mediocrity, so it may not seem much to proclaim AFL Live as the best digital re-creation of the sport to come along in years. The praise may be faint, but it's still deserved, because AFL Live nails the basics of Aussie Rules much more so than other recent attempts, feeling and moving like an authentic re-creation of the fast-moving, bruising sport. It's a pity the rest of the package doesn't match the core gameplay; AFL Live features bugger-all game modes, mediocre looks, and at times dodgy AI. The game doesn't build on its promising foundations, making it fun to play with friends but merely passable at other times.

AFL Live gets it right where it needs to the most: its gameplay is a convincing re-creation of Australia's homegrown version of football. On-field players move and act realistically--forwards lead into space the way you'd expect them to, midfielders jockey into position and run off rucks well, and defenders try to spoil every time the ball rockets into the 50. AFL Live also gets the speed of the modern game right. You have little time to dispose of the ball once you're in possession, and even at the lowest difficulty, quick handballs and kicks are positively mandatory, with defenders tackling early and often. Holes in defences close up as quickly as they open, and there's a great feeling of satisfaction when a string of moves work, such as landing the pill on the chest of a full forward after a hard-ball get and handpass from the bounce.

AFL Live's controls are mainly up to the task, letting you move as quickly as you need to in the game. Handballs and kicks can be performed in any direction using the left stick, while having a dedicated button to kick at goal means you can perform snaps at the sticks much more quickly. It's easy to get out a quick handball before a tackle, and with a bit of practice, it also becomes easier to kick to a player on the lead upfield. Spotting them, however, is problematic. AFL Live comes with several different views of the field, but none of them give you an ideal view that doesn't affect your perspective of either the play or what's happening further down the oval. The game's default side view is the best compromise, and even here you're forced to rely on the small mini-map to spot free players.

The way AFL Live handles rucks is its most interesting control feature, though. Instead of pressing buttons, to win bounces or throw-ins you need to move the right stick in the direction you want to tap when the bounced (or thrown) ball reaches its apex. Good timing is required to win the ball, and it is genuinely rewarding to win a tap, especially at higher difficulties or against human opponents.

While AFL Live gets the basics of the real-life sport right, there's little else goal-worthy in this title. There are quirks in player controls, with selected players often stopping for a second before running to collect the ball. This breaks the flow of this otherwise fast-moving game, and it's jarring every time it happens. Defensive controls also don't fare very well. Tackles are easy to perform, with selected players automatically running at the ball carrier if the tackle button is held down. But trying to get your defender to spoil a mark or get in front of a player who's about to receive a kick doesn't work that well, and he feels sluggish and unresponsive.

There's not much challenge in AFL Live. Your AI opponents are pushovers, and the only real test is at the game's highest difficulty setting (and even then, wins are easy to score). Gameplay modes are nonexistent; AFL Live's cupboard is as bare as the top of Leigh Matthews' shiny head. The game offers the 2011 season to play through, as well as the preseason NAB Cup and one-off matches, and that's it. None of the extras from previous AFL games are included, such as multiseason options, and there are no teams or guernseys to unlock and no classic matches or teams to relive. Even the game's training modes are stripped; you can play a training match, but there are no videos or other form of in-depth tutorial teaching you how to play the game (apart from a few still screens with control instructions). You can, however, create players, teams, and competitions, but the dearth of out-of-the-box content is disappointing.

AFL Live may not offer much for the solo player, but it fares well as a multiplayer experience. The speed of the game makes it a fun and fast-paced affair when playing with friends, and it supports four players in offline matches. That number moves up to eight online (four per side), and AFL Live has an interesting points system which gives scores based not only on win/loss, but on what's achieved during the matches played. You can earn points by making a set number of tackles or kicks, scoring goals, and even not quitting matches. Points, however, don't count for much other than positions on the game's online leaderboards. Matches ran smoothly during testing, and as you'd expect from a game based on an Aussie sport, there was no shortage of local competitors to be tackled.

Presentation is where AFL Live really comes up short. Players move well enough when viewed from a distance, running, marking, fending, and tackling realistically. Shifting to close-ups or any tighter views reveals plenty of rough patches, though, with player models looking little like their real-world counterparts and animations looking jerky and stilted. Commentary is handled by announcer stalwarts Dennis Cometti and Brian Taylor, but there's so little dialogue that you hear the same phrases repeated ad nauseam. The commentary also makes blatant mistakes (such as stating marks from outside 50 as "certain goals" whilst questioning whether kicks 10m straight in front will get the six points), so turning off commentary altogether is the only sensible option.

Though AFL Live does feature significant drawbacks, at its core it's a decent AFL game that fans of the sport will have fun with. Playing as your favourite team is fast-paced, and taking on friends both offline and online is enjoyable and hectic. Some may think comparisons to sports franchises from gigantic publishers may not be fitting due to the homegrown nature of the title, but with AFL Live having the same asking price as those big-budget games, they're unavoidable. Despite the fact that AFL Live is the best Aussie Rules game in years, its lack of content and average presentation mean it's still a long way off from being world-class. 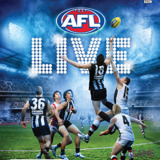 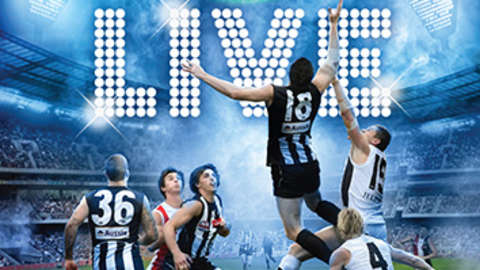 A new Aussie Rules game is on the way from Brisbane developer Big Ant.