Like Pilotwings 64, Aero Wings has realistic physics, and offers an authentic flying experience.

If you've ever watched those Navy barrel rollers, the Blue Angels, and wondered what it would be like to pilot a jet fighter through a wide variety of acrobatic routines, Aero Wings just might be the game for you. Aero Wings could be considered a love-it-or-hate-it game for the system. Like Pilotwings for the Nintendo 64, Aero Wings is a quirky game in that it offers new avenues of gameplay in an unusual setting.

Instead of commandeering the Blue Angels, you take control of a Japanese troupe known as Blue Impulse. Your goal in the game is to execute various routines as expertly as you can, either in formations of two, three or four jets, or, should you prefer, solo. The various modes included are blue impulse mission, sky mission attack, free flight, and multiplay. Blue Impulse mission, the primary flight mode, puts you through the paces of the game via a series of drills designed to test your flying skills. As you progress through this mode the requirements will increase in complexity, making it increasingly difficult to complete. Sky mission attack is like Pilotwings in that your course is filled with glowing rings that you must fly through for points within a predetermined amount of time. Free flight, naturally, is a mode that lets you fly around to your heart's content, allowing you to get used to the nuances of your plane. Multiplay lets up to four players play at once, after selecting one of three different routines. The camera view lets all four players be seen onscreen at once by panning out, depending on how close or far apart the planes are from one another. While this can become disorienting, it's still interesting to see four gamers playing without a split screen involved. Speaking of camera angles, there are up to 13 different ones that you can assign to the camera button. While some of the angles are extremely functional, others are practically worthless in gameplay, included only for the benefit of some particularly dramatic replay angles.

Controlwise, the game is quite competent, via the analog pad or the digital pad, both of which you can set in the options screen. The physics engine in Aero Wings provides some particularly convincing flight effects, which will give your stomach a tumble during an ill-maneuvered barrel roll. During flight routines, one button controls your gears, while another controls your air brakes. Others yet control throttle, flaps, rudders and even the smoke button for some fancy skywriting. Lastly, one final button lets you dictate the formation (such as delta, diamond, bonton, echelon, trail, abreast or landing) of your troupe.

Graphically, the game is well done. While the planes look nice and benefit from some realistic light sourcing, the backgrounds appear fairly drab. While they look appropriate in an "I'm 5,000 feet up in the sky so the ground looks out of focus" kind of way, the backgrounds might have offered a bit more photo-realism. From a distance they looks fine, but when you zoom in on a mountaintop, or over a body of water, the graphics become much less convincing. It sure looks better than Ace Combat 2 for the PlayStation, but you can imagine what a developer like Namco would do if it did a flight combat game for the Dreamcast. Some specular highlighting would have been nice too, but these are minor gripes. The fact is, this looks like a first-generation Dreamcast game, and things could surely improve later on. Fortunately, a little pop-up aside, the frame rate stays nice and consistent, in the 30fps range. The HUD looks cool, too.

The soundtrack is a hopping mix of drum n' bass and some other "x-treme" sounds, although there are certainly moments of serenity to be had. Musically, the game will remind you of Namco's recent efforts. House, techno, and drum n' bass all make an appearance, and the music is actually quite good. The sound effects are all fairly realistic, if you actually know what it's like to be in a jet at 3,000 feet. Also, effects change depending on whether you're using the in-cockpit camera or an exterior view.

To conclude, Aero Wings is certainly a quality game, with little to diminish its worth and value. Unfortunately, it would be hard to recommend this game to anyone other than an aspiring Blue Angel (or Impulse as it were). Like Pilotwings 64, Aero Wings has realistic physics, and offers an authentic flying experience. Also like Pilotwings 64, Aero Wings is riding the fence between interesting and boring. If that's your bag, baby, then this game should suit you just fine. Personally, I was looking for the fire button the entire time. Not for everyone. 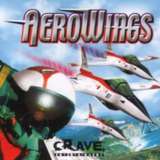