Little seems to have been lost in the translation from the 1993 original, but then again, it was a mediocre game to begin with.

Aero the Acrobat is a cut-and-dried platformer that was originally released on the SNES and Genesis back in 1993. If you don't remember the original, you're not alone, since the game didn't make much of a splash when it was first released. So it seems a little odd that Metro 3D would pick such a game to port to the Game Boy Advance. Little seems to have been lost in the translation, but then again, it was a mediocre game to begin with.

The hero of the game, Aero, is a high-flying performer in a circus. All is well until an evil madman comes along to throw everything into chaos, and it's up to Aero to set things right. The story is typical and basically in place only for the sake of being there. Strip away the story, and you're left with a game that has been seen countless times before. Anyone who is familiar with platform jumping, item collecting, and levels chock-full of simple enemies will be able to pick up this game and play it like it was second nature. The game's levels are designed in such a way that Aero has to make use of his acrobatic skills to make it to the end of each one by way of jumping on trampolines, being shot out of a cannon, or traversing a high wire on a unicycle. The main character of the game is a circus performer, so the majority of Aero the Acrobat takes place under the big top. Plus, the game looks and sounds like you would expect from a circus. The game doesn't offer much to see or hear, though its technical qualities are passable--just not anything special.

If you're a fan of this type of game and have played virtually every other platformer on the GBA, then Aero the Acrobat could make a decent addition to your collection--even though it just doesn't do much to distinguish itself. Otherwise, there are a number of better choices available that would suit your needs much better than this simple and forgettable game does. 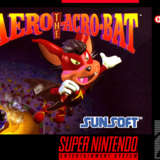