As one might imagine from looking at it, Ascii's AeroGauge runs basically along the same conceptual lines of play as Psygnosis' Wipeout XL or Acclaim's Extreme G: futuristic racing vehicles competing on futuristic tracks. The big difference between AeroGauge and those titles, however, is that in AeroGauge you can fly your ship high in the air - independent of the courses (except when bottlenecked into tubes) - no power-ups or weapons are available, and ... it's not very good.

At the start of each race, you must qualify for position before racing against actual opponents. On one hand, it's nice to get a chance to learn a course without any competition, but on the other hand, it seems a lot like a way to artificially extend the length of the game. The races themselves are not very forgiving, and making one mistake often means there'll be no chance of you coming out at the head of the pack. Navigating the courses flawlessly can be pretty tough in some of the later of the game's six courses. And the type of vehicle you choose, one of ten including a hidden option to fly as the N64 controller, does little to vary the gameplay experience overall.

Graphically, AeroGauge is really nothing spectacular as it displays some of the worst pop-up seen in a racer in a long time. The music has a tinny, old-school coin-op-type sound, like that of an old Ninja Gaiden machine, and has perhaps the most grating tunes this side of Midway's San Francisco Rush for the N64. Of course, these issues would all be of minor importance if the control was tight and the feeling of speed was strong, but neither is. It's just an all-around pretty dull experience. 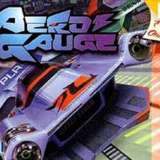