Adventure Time: Explore the Dungeon Because I DON'T KNOW Review

Adventure. The word suggests danger, daring, and excitement, perhaps a journey into the perilous unknown. In Adventure Time: Explore the Dungeon Because I DON'T KNOW, you do indeed venture into dangerous realms, but all you find there is unadulterated drudgery. The game possesses none of the whimsy and imagination of the cartoon that inspired it. This is dungeon-crawling at its dullest and most rudimentary.

Princess Bubblegum has summoned the heroes of the realm, charging them with exploring the Secret Royal Dungeon beneath her castle and dealing with the rambunctious monsters who are not so securely imprisoned there. Unfortunately, she doesn't warn Finn, Jake, and the rest of the gang that it's more likely that the boredom will kill them than the monsters. You trudge through floors of the dungeon, hacking away at enemies and picking up piles of treasure here and there. That's pretty much it.

Of course, there are some great games that rely on this basic premise. Some offer you a diverse range of attacks that feel powerful and are satisfying to use. Some pit you against memorable foes who use attacks that require you to play smartly if you hope to emerge victorious. Some include deep character customization options. Some have terrific gear you can find and equip to make your hero increasingly more powerful. Adventure Time has none of this. The game takes a few cues from the landmark multiplayer arcade dungeon crawler Gauntlet, but despite having the benefit of nearly 30 years' worth of genre advances and innovations to draw upon, Adventure Time fails to even be as exciting a game as that old quarter-muncher.

Yes, there are a number of playable characters with different abilities. Marceline can float right over pits and traps, for instance, while the Ice King can freeze enemies. But no matter which character you choose, the exploration remains slow and tedious; the dungeons remain bereft of interesting places, enemies to fight, or items to discover; and the combat remains excruciatingly shallow and simplistic. No subweapon you might find and pick up in the dungeon, be it a kitten gun or a fire hose (that is, a hose that shoots fire) does anything to liven up the process of pushing buttons mindlessly until monsters fall before you. You can play with up to three friends, but then you're all just sharing a miserable experience.

After suffering your way through a number of levels, you're given the opportunity to return to the surface with the treasure you've collected, but there's little of interest to spend that treasure on. You can sink it into a few absurdly expensive upgrades to attributes like health and damage, each of which can be upgraded only two or three times. The problem with them being so costly is that you can't stash your gold anywhere. When you reenter the dungeon, you must give up any unspent treasure. This is an idea that works well in games like Rogue Legacy, in which there's a satisfying loop of earning more treasure in the dungeon, which lets you strengthen your character, which lets you earn yet more treasure on your subsequent dungeon runs. But in Adventure Time, spending time slogging through several levels of the dungeon, only to realize that you don't have enough treasure yet to purchase any upgrades and must try to slog through several more levels and collect still more treasure, just feels like punishment on top of punishment.

There's the rare moment of humor, like when the vampire Marceline remarks, right after you upgrade her health, "I can't die anyway!" But cutscenes and dialogue exchanges are few and far between, so even the most devout fans of Adventure Time won't find enough entertaining quips or goofy moments to reward them for struggling through the dungeon. The game's title may not provide justification for exploring the dungeon, but the much bigger I DON'T KNOW here is why anyone would play this game.

View Comments (61)
Back To Top
2
Terrible
About GameSpot Reviews 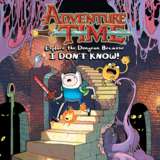 Adventure Time: Explore the Dungeon Because I DON'T KNOW!
Follow
$4.39 on Walmart
Buy

Carolyn has been playing dungeon crawlers since the days when "Warrior needs food badly!" could be heard echoing throughout arcades across the land. She thinks this might be the worst dungeon crawler she's ever played. 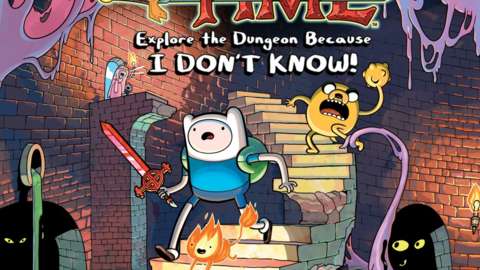 Adventure Time: Explore the Dungeon Because I DON'T KNOW!

Adventure Time: Explore the Dungeon Because I DON'T KNOW has you save the Candy Kingdom by exploring the mysteries surrounding a massive Secret Royal Dungeon deep below the Land of Ooo.

5.1
Sign In to rate Adventure Time: Explore the Dungeon Because I DON'T KNOW!