Advance Wars' new look and feel won't appeal to a lot of fans, but the series gameplay remains intact.

Intelligent Systems' long-running turn-based strategy series returns to the Nintendo DS with Advance Wars: Days of Ruin, and it's far and away the most divergent entry in the series yet. The game eschews an absurdly happy-go-lucky attitude toward military conflict in favor of a darker, more ponderous tone, which suggests that the series is going through its sulky teenage years. The gameplay itself will still feel familiar to returning players, though even veterans will notice an increased level of difficulty, making it a slightly less accessible experience. Even so, Days of Ruin still stands as a very satisfying strategy game with a ton of content.

The game sets its bleak tone by kicking things off just after the end of the world. Meteors have struck Earth, leaving it looking appropriately postapocalyptic. Any forms of government or social services have been wiped out, and the survivors scour the planet for shelter and supplies from the wild gangs of bandits that have begun popping up. The story focuses on a young boy named Will, who is rescued by a small band of surviving soldiers from the Rubinelle army. As they make their way across the desolate wastelands, they encounter animalistic bandits, cowering, duplicitous politicians, and other soldiers who insist on maintaining their preapocalyptic grudges. It's a pretty dramatic shift in tone from past Advance Wars games, which were themselves fascinating for their high contrast between breezy tone and grim subject matter, and it's a jarring change. And unfortunately, the anime-grade writing simply isn't strong enough to drive home any real impact from the story's meditations on the cost of war.

Along with darker thematic tone comes a whole new look for the series, which trades its primary hues for more subdued earth tones. The game also features entirely redrawn graphics, which are more detailed and animated than they have been in the past, and it makes the game feel like it was really designed for the DS from the ground up. The music is also a little more aggressive, though after about a dozen missions of listening to the same rock-opera theme music, you'll likely just find it aggressively annoying.

These changes are all largely superficial, though, and ultimately, underneath all of the game's gritty pretense the action is still pure Advance Wars, the gold standard for strategy games on the DS, and arguably one of the more consistently enjoyable strategy franchises on any system. A big part of the game's appeal is that it's deceptively easy to get into, and its turn-based nature means that you can take your sweet time deciding where you'll move your units. With no dedicated tutorial, the game is very gentle about how it introduces new concepts, starting you off on a small map with just a handful of different units with the simple objective of eliminating all of your enemy's units. You'll gradually be introduced to a larger variety of ground units, as well as your ability to produce new units at factories--though this requires money, which you earn by capturing cities scattered across the maps.

Advance Wars fans will notice that a bit of rebalancing has gone into Days of Ruin. A few units have been retired and a few new ones have been introduced, such as the antitank unit, the flare unit, the war tank, and the seaplane. There are also new obstacles to contend with on the battlefield, such as crazy energy fields produced by the meteors that caused this whole mess in the first place. Commanding officer powers have also been retooled, and while the CO that you choose to play with will still have an impact on the battle, it's much more subtle now. Individual units can now earn ranks through combat, with higher-ranked units being more potent. As many specific changes as Days of Ruin makes to the Advance Wars formula, the pacing and feel of the game is still much the same.

By the time Days of Ruin introduces most of its significant elements, like nautical and aerial units, multiple factions, commanding officers, fog of war, multiple enemy factions, and other concepts, you'll find the game to be significantly more complicated than when you started. You'll also find that you've already completed half the missions in the main campaign, though this doesn't mean you're halfway through. The missions become significantly longer, as well as significantly more difficult, potentially to a fault. Being able to just bowl over your enemy in a strategy game isn't fun, but neither is the sensation that a wrong move in the first few turns will spell certain defeat. When it finds its balance, though, it's a terribly engrossing game that can hold your attention for hours at a time.

The main single-player campaign in Days of Ruin consists of 26 campaign missions of varying length, as well as a number of optional training missions, which are often even more punishing than the campaign missions. Frankly, all of the really exciting stuff in this game exists outside the single-player campaign. In addition to local multiplayer support, Days of Ruin features online play for up to four players, complete with voice chat. If the 150 maps that the game comes with aren't enough, there's also a fully featured map editor that works in tandem with the game's online abilities, allowing you to upload your custom maps and share them with friends.

Even if the stiff challenge and clumsy new "serious" tone don't make it the most accessible or recommendable entry in the series, there's still a lot to like about Advance Wars: Days of Ruin, especially if you're looking for some really compelling online action for your Nintendo DS. 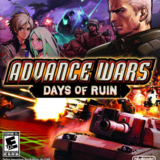