Whether or not you consider yourself a fan of turn-based strategy games or any strategy games, chances are you'll have a terrific time playing Advance Wars 2.

The first Advance Wars was the definitive sleeper for the Game Boy Advance. Released without any fanfare in the fall of 2001, this ingenious turn-based strategy game met with unanimous acclaim from critics and soon earned a large following of fans. The game's execution was practically flawless--from its distinctive graphical style, to its perfectly tuned gameplay balance, to its well-integrated tutorial, Advance Wars was highly accessible and very deep. It was simply an outstanding game by any standards and was ideally suited for the GBA's portable form. Now Nintendo and Intelligent Systems are back with a sequel to Advance Wars, which begs the question, how do you make something that's extremely good to begin with even better? Advance Wars 2 doesn't try to mess with success and doesn't try to fix anything that wasn't broken (not that anything was). It's fundamentally similar to its predecessor, offering more of the same addictive gameplay and the same memorable characters. However, Advance Wars 2 also expands on the original in some subtle but meaningful ways, making it technically superior to the first game even if it isn't as innovative. At any rate, it's a must-have for Advance Wars fans, and it's also great for anyone who might have missed out on the first one.

Like its predecessor, Advance Wars 2 is very easy to pick up, regardless of whether or not you've played other turn-based strategy games before. As the commanding officer of a small military force, you'll take turns with your opponent moving your units around a tactical map, capturing territories, attacking enemies, and positioning your forces strategically. The game teaches you how to play and about all the various units you can use in the context of the first few missions--this will all be old hat to veteran Advance Wars players, but they might want to not skip over it since Advance Wars 2's characters are so endearing, and the dialogue is so well written.

It's not like this is a story-driven game--the focus is squarely on gameplay, but there's a good amount of plot to lend continuity to the campaign, a branching series of linked scenarios that compose the main mode of play. The premise is simply that the Black Hole Army, which you fought against at the end of the original game's campaign, has returned in greater numbers and is again seeking to take over the land. So the various warring factions from the first game will have to stand united against a common threat. Despite the military theme, the game maintains a lighthearted tone that just about anyone would like, and the various COs for all the different factions have unique personalities that come across in their interactions between missions and to some extent in how they influence their units.

The greater number of COs is one of the key features of Advance Wars 2. In the previous game's campaign, you only controlled the Orange Star army and its three COs, Andy, Max, and Sami. The enemy COs you'd square off against, including Blue Moon's blustering CO Olaf and Green Earth's intimidating fighter pilot CO Eagle, were unlockable for the game's skirmish mode but were primarily your opposition. Now the campaign offers you the chance to play from the perspective of most all the game's original COs, plus a number of new ones. Every CO has his or her own strengths and weaknesses as a commander, plus two different super powers--they only had one in Advance Wars, but now they also have a higher-level power that takes longer to charge up. Some COs' supers are considerably stronger than others', but like every other aspect of Advance Wars 2, this is well balanced--the stronger super powers take more turns to charge up.

The COs themselves are interesting and fun to play. Fans will remember the original cast, including Kanbei, a samurai CO whose forces are more expensive to deploy but are better trained and stronger. There's also Grit, a gunslinger whose indirect fire units, such as rocket launchers, enjoy tremendous range, but whose standard forces are weak in head-on battles. The new COs include tough opponents such as Adder, whose units are particularly fast and so can move farther each turn, and Flak, a brutish commander whose units sometimes inflict extra damage. Just like in the first game, there's only one set of units in Advance Wars 2, though they at least look different for each faction. But, depending on which CO you're playing as (or against), you'll have to play to your strengths and try to offset your weaknesses.

There's only one new unit in all of Advance Wars 2: the neo tank, a devastating spiderlike tank that's the toughest thing on the ground and whose only real weakness is its high cost. The fact that the gameplay is basically the same and that there's only one new unit may initially disappoint some fans of the first game expecting a completely overhauled sequel or at least some unique units for the different sides. But they should soon realize that the original Advance Wars really didn't leave much room for new unit types. You already have access to two types of infantry, light and medium (and now heavy) tanks, a recon vehicle, an antiair vehicle that doubles as an antipersonnel gun, mobile artillery, mobile rockets, mobile missile launchers, submarines, destroyers, battleships, armored personnel carriers, transport helicopters, naval landing vehicles, battle copters, fighter jets, and bombers. It's an impressive arsenal, and each unit is extremely well suited to particular tasks and can be useful in any stage of a battle.

There's a lot of variety between the different COs and the different units, but like the first game, Advance Wars 2 doesn't stop there. You'll have to adopt completely different strategies depending on the map type. On some maps you'll need to capture factories and cities in order to fund your efforts, and you'll need to think carefully about whether to buy weaker units each turn or save up for some of the tougher ones. Other missions start you off with all the units you're going to get, and you'll need to conserve those forces as best you can to accomplish your objective. Still other missions introduce fog of war into the mix, which limits your visibility to what's in the immediate vicinity of your forces. Good recon becomes essential, and you can even mount ambushes by hiding units in forests or ocean reefs. Terrain plays a big role in Advance Wars 2 just like in the first game, because it can impede units' movement or grant them defensive bonuses in an engagement. Other factors, such as having to occasionally resupply vehicles with fuel and ammo, contribute to making Advance Wars 2 a truly sophisticated game.

Each unit starts with and has a maximum of 10 hit points, and the more hit points it has, the more damage it can inflict. When one direct combat unit attacks another, they exchange fire in a great-looking animated side view of the battle, just like in the first game (and just like in the first game, you can choose to skip these sequences if you want to really speed up the pacing). Depending on armor classes and such, damage is dealt, and one unit may possibly be eliminated. The key strategy of Advance Wars 2 is in knowing how best to inflict maximum damage while cutting your own losses, which you might have already picked up on if you played a lot of the first game. Again, though, the numerous new COs will make you rethink some of your strategies to an extent.

The campaign missions in Advance Wars 2 are better than those of the first game. They start off pretty easy but soon get quite challenging. The enemy AI fights ruthlessly and is less susceptible to some of the baiting tactics you could use in the first game. Don't worry if you lose--you'll get some helpful tips on how best to approach the mission if you want to give it another go, or you could just choose another, since you'll often have as many as four different missions to choose from at a time. Advance Wars 2's campaign missions also have numerous new terrain objects not found in the first game. You'll have to learn how to deal with impenetrable pipelines, deadly stationary cannons, powerful laser beams, missile silos, and even an active volcano. Plus, many of the campaign missions give you command of more than one CO's armies. These sorts of things spice up the campaign missions and constantly keep you on your toes.

Like in Advance Wars, as you accomplish missions in the sequel, you earn points with which you can unlock new stand-alone scenarios and all the various COs for use in the game's war room, which is basically a skirmish mode. Between the dozens of campaign missions and the war room missions, there's a ton of value and countless hours of gameplay to be found here. If you played the first Advance Wars absolutely to death, the sequel might not captivate you for quite as long overall, but chances are it will. For good measure, there's a multiplayer mode for two to four players. You can play against each other individually or as teams, join forces against the computer, and more. There's also a map editor so that you can create your very own missions.

Advance Wars 2 looks great, though it reuses a lot of the same unit and terrain graphics of the original. The Black Hole Army's units have a brand-new look to them, and all the old COs have been redrawn, so the game still looks fresh. One nice detail from the first Advance Wars unfortunately didn't make the cut for the sequel: You no longer see an animated reaction shot of the COs after an exchange of firepower. In the first game, it was fun seeing the COs smile victoriously or frown in disappointment depending on the outcome of an engagement. You'll still see different images of the COs in between-mission cutscenes, however. Advance Wars 2 also recycles some of the sound and music from the first game, though since every CO has his or her own theme, plus different themes when using their super powers, there's plenty to listen to. Some of the sound effects have also been redone, and overall, the game sounds very good.

This is just an excellent sequel overall. You could cynically call it a rehash, but considering how fine-tuned the gameplay of the original was, instead you'll more than likely be impressed at how Intelligent Systems managed to take all that was great about the first game and make it a little bit better without messing anything up. Whether you prefer playing alone or with friends, at home or on the go, for a few minutes or for hours on end, and whether or not you consider yourself a fan of turn-based strategy games or any strategy games, chances are you'll have a terrific time playing Advance Wars 2. No GBA owner should be without it, and anyone getting their hands on a new GBA for the first time should make playing Advance Wars 2 one of their first orders of business. 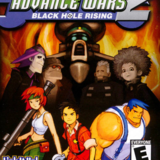