Not the sequel many were hoping for, but it's still a decent beat-'em-up that should please people who go into it knowing exactly what they're getting.

Ask someone that used to (or still) owns a Sega Saturn what some of his or her favorite games for the system are, and one of the titles that's likely to crop up near the top of the list is Guardian Heroes--a medieval-themed action game developed by Treasure, the same group of coders responsible for numerous timeless greats like Gunstar Heroes, Radiant Silvergun, Sin and Punishment, Ikaruga, and Astro Boy: Omega Factor. Now, Treasure has developed a sequel to its classic Saturn game in the form of Advance Guardian Heroes. The new game picks up where the original left off, it shares some of the same features and play aspects in common with its predecessor, and it is generally a good action game in its own right. However, prospective buyers should definitely think long and hard before taking the plunge, primarily because the changes that were made to the combat system and level structure may not please everyone. Also, buyers should take into consideration that certain aspects of the game demonstrate some minor yet glaring flaws that really should've been ironed out before it shipped, including some positively awful English dialogue localization.

Don't misunderstand--the story itself is fine; it's just written poorly. The gist goes something like this: The old wizard Kanon and his effeminate sidekick, Zur, both from the original game, have returned from the heavens to a futuristic Earth, this time with the cursed souls of the ancient Guardian Heroes in tow. Their plan is to lure out a new sucker, er, hero, and get him to absorb the soul of the undead soldier along with the souls of the other guardians, in order to create a superbeing that they'll subsequently brainwash. That all makes sense, in a sci-fi kind of way, and you have to admit, it's simultaneously cool and innovative how Treasure has incorporated the heroes from the first game as villains into the sequel.

You'll probably end up skipping past most of the dialogue segments, though, what with comments like, "Hmm, they do better than I thought" and "Can't you fight that far to recognize my overwhelming power," popping up every minute or so. Publisher Ubisoft could've and should've let a native English speaker give the script a once-over before sending the game out for duplication. The dialogue in the original Guardian Heroes was funny in the ha-ha sort of way. Whatever humor was present in the Japanese version of Advance Guardian Heroes got lost in translation.

The butchered translation is the most egregious example of the rough edges that should have been smoothed over before the game was shipped. In addition to that, the controls don't always respond as fast as they should, the graphics tend to stutter and slow down when too many enemies are visible (which also leads to ignored command inputs), and the difficulty settings are poorly balanced.

And still, despite those embarrassing rough edges, Treasure has managed to put together a clever action game that some people are absolutely going to like. Fans of the first game will appreciate running into the eight "old" heroes, such as Ginjirou and Han, who make up roughly half of the sequel's corps of bosses. The levels are put together Final Fight-style, which means that you can move closer or farther away from the foreground in addition to going left and right. That pretty much allows a three-dimensional range of motion, especially when you factor in the jump button. Some levels require repetitive jumping across falling platforms or the execution of a series of diagonal wall jumps to reach an upper area. The developers have made it easy to perform these ninjalike jumps by simply making it so you just need to tap the jump button twice when a jump icon appears.

The fighting controls are also fairly easy to learn and they offer a good amount of depth. Each character has eight or nine basic attacks, which you can perform just by pressing the B button and the various directions on the control pad. If a character has magic attacks, you can choose between them by tapping the L button and cast them by holding the R button and pressing B. The R button by itself lets you put up a magic barrier, much like the block button did in the original Guardian Heroes, but here you also have the option of performing what's called a countermove. Casting spells and using the magic barrier eats up magic points, which gradually refill over time, but if you tap the R button the instant before an attack strikes you, the barrier will reflect the attack back at the enemy and will actually return magic points to you. Another method of regaining magic points involves what the game calls the anger gauge. Each time you hit an enemy or an enemy lands an attack on you, the anger gauge fills up a little more. When it's half full, you can put the character into his rage state, which, besides giving you a brief period of strength and quickness, also rapidly refills the magic gauge.

The style of play alternates rapidly between periods of button mashing, where scores of enemy knights, wizards, and goblins come out and try to hurt you by attacking in numbers, and periods of sheer mental dexterity, where you come face-to-face with a boss and have to be patient while it goes through its attack patterns and presents its weakness--which is often subtle and short lived. Combat against the little guys mainly involves running up to them and punching them until they disappear. Enemies can juggle you into the air for multiple hits with kung fu combos or magic attacks, and you can do the same to them by casting a spell into a group of enemies so that they keep passing the effect of the spell among themselves by bumping into each other. The bosses require a great deal of trial and error. Their patterns usually include a period of time when they're out of reach somewhere in the background, but they'll still able to attack you. Gradually, you'll figure out when to attack the bosses, what attack to use in that situation, and how to use the countermove to significantly limit the damage you take. One thing that some people will like and some people will hate is that the game offers unlimited continues and lets you retry from the last subsection in whichever level you died.

In typical Treasure fashion, every level is an assault on the senses. The cycling between moments of frantic button mashing and patient puzzle-solving creates an underlying sense of tension. Various moments of quirkiness inject a dose of humor here and there, like the teeny-tiny goblins that give you hearts or crystals when you smash them, or the boss that constantly whines about how he lets you win every time you face him. When you die, a demon appears onscreen and gives you a choice: take the "game over" or trade your soul for six more minutes of playtime and unlimited health and magic.

Visually, the manga-style character sprites and colorful postapocalyptic backgrounds provide quite the contrast. The majority of levels in the original Guardian Heroes were set in the countryside or in villages, while the settings in the sequel have players wandering through burned-out cities, speeding down highways, and tearing the heck out of space stations. Most levels make use of some of the GBA's better graphical tricks, such as multilayered background scrolling, transparencies, and pseudo-3D effects. Level two takes place on a raft hurtling down a river, but instead of showing the action from the traditional side-scrolling viewpoint, the view shifts so that obstacles and enemies gradually come into view from deep in the background. All the while, the raft is tilting and turning and foamy spray is erupting from the river. The effect is similar to the perspective used in classic arcade games like Hydra, Afterburner, or OutRun. Other levels have sections that involve riding atop missiles, hopping between pieces of falling debris, or running away from pursuing dangers like a raging fire or a gradually collapsing highway. The audio isn't that great--just some sci-fi-reminiscent background music, an assortment of punch noises, and a few speech effects--but it does fit the action well.

One of the nicer aspects of the first Guardian Heroes was how the characters earned experience points by beating up on enemies, which could then be spent to upgrade various traits like attack power, defense, magic strength, magic defense, and so on. Advance Guardian Heroes also lets players upgrade their character's abilities, but instead of earning experience for every attack, enemies leave behind crystals that can be spent at the end of each level to buy upgrades.

Status upgrades aren't the only things you can buy with the crystals you collect. Guardian Heroes stretched the very definition of "replay value" by offering dozens of playable characters, which were unlocked by beating them in the game or going through the levels in a certain order. Advance Guardian Heroes also has a gaggle of playable characters (21!), but the method of unlocking them is more matter of fact. After you redeem crystals for the status upgrades you want, another screen appears that lets you earmark the crystals you have left to be used for researching a new character. If you manage to pay the full cost before the end of the game, you'll be able to use the new character the next time you play. This method of character unlocking injects an extra element of strategy into the game--do you use your crystals to improve the character you're already playing, or do you make do with a weaker character in order to use the crystals to unlock another playable character?

With the exception of unlocking additional characters, Advance Guardian Heroes unfortunately doesn't offer as many reasons to continually play through it as its predecessor did. The story mode is short--six main levels, 28 sublevels in all, about 60 minutes beginning to end--and the order of the levels is fixed. The greatest thing about the first Guardian Heroes was that the order of the levels changed based upon what enemies you beat. Completing the sequel on the normal difficulty setting reveals a time-attack play option, which challenges you to beat 50 enemies as quickly as you can. Those of you that like to create replay value by progressing upward through a game's difficulty settings will be chagrined to learn that the difficulty settings in Advance Guardian Heroes are terribly unbalanced. Easy is too easy, normal is hard, hard is brutal, and superhard is flat-out impossible for unmodified human beings. The game's multiplayer options extend its life expectancy somewhat for those that can take advantage of them. The story mode lets two players play cooperatively, and there's a versus fighting mode that supports up to four players at once in a number of different arenas.

On the whole, Advance Guardian Heroes isn't as satisfying as the sequel to one of the Saturn's greatest games should be, but it is a decent beat-'em-up that should please people who go into it knowing exactly what to expect. 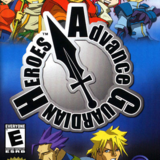 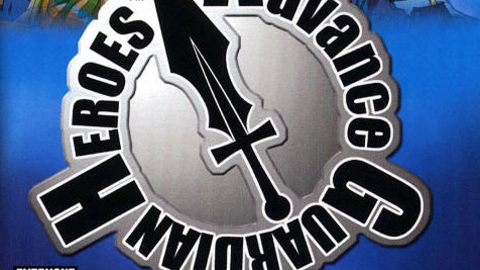 Not the sequel many were hoping for, but it's still a decent beat-'em-up that should please people who go into it knowing exactly what they're getting.