In Ace Combat: Assault Horizon, the last action you take is not to participate in a thrilling dogfight, or to victoriously soar through the clouds in an F-14 Tomcat. No. The very last thing you do in this airborne action game is to press a button to pump your fist in the air. No single moment exemplifies the spirit of the new and soulless vision of Ace Combat better than this display of alpha male bravado. Assault Horizon provides heaps of the visual spectacle you'd see in a summer blockbuster--but absolutely no depth. Gone is the devotion to heartfelt storytelling of previous Ace Combat games. Gone are wingmate commands, varied mission objectives, and even (mostly) the fear of crashing into anything. Assault Horizon is about being in your face. Like most visual spectacles, those in this game draw your eye for a short while, and even provide some shallow entertainment. But no matter how loud and bright the explosions get, they can't disguise the obvious: Assault Horizon is so easy and repetitive that it almost plays itself. It is so busy being a movie that it forgets to be a game.

Most missions put you in the cockpit of an aircraft and whisk you to the skies, where fighters and bombers soar through the clouds, waiting for your missiles to strike. Like previous Ace Combat games, Assault Horizon is more of an arcade flight combat game than a simulator. You fly a number of different aircraft, each with its own strengths and weaknesses. But they are similar enough that you feel immediately comfortable regardless of your choice. In the sky, you lock on to enemies and let your missiles fly when they are in range, or speed in close enough to let loose a barrage of machine-gun fire. These are real-world jets, albeit ones that don't need refueling and that carry an unrealistically large amount of ordnance.

Assault Horizon takes the arcade aspects of previous games and distills them even further. Now, you don't even need skill to triumph in the air; when you close in behind an enemy jet, you can tap the shoulder buttons to initiate dogfighting mode. In a dogfight, the camera zooms in, and you automatically follow your target in a minigame in which you must hover your reticle over your foe and fire missiles when it turns red. Dogfights aren't fully on rails, however. You can break out of the dogfight if you need to evade other aircraft, and must maneuver to keep your intended victim within your sights. You can also turn the tables on fighters that engage you in this manner, tapping your shoulder buttons at the right time to circle behind and change your role from victim to executioner.

Dogfighting mode makes a slick first impression. The cinematic camera angles impart a sense of speed and danger as you hurtle through the air at the mercy of your enemy's whims. When your fatal missile hits its mark, the camera might cut away from the action to show the flaming wreckage plummeting downward. It's a flurry of fire and metal that's enjoyable to watch and listen to at first. Sound effects are bombastic, without ever drowning out radio chatter. The blurry ground textures of previous Ace Combat games have been replaced with nicely detailed cities. Most past installments occurred in fictional settings, but Assault Horizon takes place in our own familiar world. Care obviously went into the choice of locations. Dubai, for example, is an effective backdrop because its man-made geography is instantly recognizable from the air.

But games aren't just meant to be seen; they're meant to be played. And Assault Horizon falls quickly into a rut because its entertainment value lies solely in the production elements. The gameplay? Hollow and repetitive. Everything has been reduced to a minigame. Need to win an air superiority mission? Initiate dogfighting mode again and again. Done deal. Have to take out a series of ground targets? Initiate another kind of on-rails sequence that removes any potential challenge. Even landing is a minigame in which you just hover a cursor in the right place. You can sometimes (but not always) avoid dogfighting mode if you want a more traditional flight combat experience, but doing so hammers home how thin the missions are. Previous Ace Combat games had you taking on giant airborne carriers, flying through caverns, and battling in monsoons. Assault Horizon's few attempts to mix things up--an attack on an aircraft carrier, taking down a few bombers--are comparatively trifling.

The Modern Warfare series' influence on the game is painfully obvious. When enemy aircraft explode, oil and blood splatter against your windshield as if the laws of physics and common sense don't apply. That blood is the same raspberry hue you see saturating the screen in Modern Warfare games, though this isn't the only way Assault Horizon tries to rip off that shooter franchise. In between jet flying missions, you might get behind a helicopter's window turret and shoot at bad guys, or paint ground targets from your bomber before bombarding them with missiles. These additional gameplay elements wouldn't seem like a bad way to mix up the action and provide variety, but as delivered, they are exceptionally monotonous. For example, one turret sequence lasts for more than 12 minutes. That doesn't sound like very long, but when you're just mowing stuff down with a gun that requires you to be only slightly accurate with your aiming, it's an eternity.

Helicopter flight missions owe even more to the first-person shooter genre than do those boring detours. Flying a chopper is much like playing a shooter, except that you can raise and lower your altitude. Otherwise, you might as well be playing an FPS--a very easy FPS. Like with jet combat, fiery visuals and sound suck you in at first. Demolishing multiple ground targets at once with your missiles produces a flourish of flames and chaotic close-ups. It's fun to watch for a bit. But from moment to moment, you do the same thing time and again: position yourself so you have a line of sight, lock on to your target, and shoot. The targeting lock is incredibly sticky, so little skill is required. Just lock and shoot. Lock and shoot. Should a missile come your way, hit your shoulder buttons and perform an evasive barrel roll to avoid it. Evasive maneuvers can be disorienting, given that you might finish one facing a completely different direction than before. But that doesn't hinder the action, which requires very little from you. Lock and shoot. Lock and shoot. Quick-time event. Lock and shoot. Where game flow is concerned, it's as shallow as it comes.

You wouldn't generally look to a flight combat game for a poignant narrative, but the Ace Combat series has a history of interesting stories that give weight to the action. Assault Horizon's opening is promising. One of your first dogfights has you screaming past towers and buildings in an F-22. There's no actual danger of crashing during this dogfight, though it effectively conveys the illusion of narrow escapes from the jaws of death. As it turns out, the battle is a nightmare in which you imagine your own death. Afterward, you meet your fellow pilots and learn of the international alliance to which you belong, as well as the insurgent threat you face. But once the plot is in full swing, nothing happens that you can't see coming, and the dialogue turns to standard airman chatter and mission briefings. A few attempts at emotion are appreciated, but it's hard to care about these characters when almost every line they utter is to move the plot, rather than to develop them as human beings. Compare this to Ace Combat 6: Fires of Liberation, which explored the effect war had on pilots as well as their loved ones, and voiced multiple points of view--not just that of the "good guys." It allowed itself to ponder. Assault Horizon's story comes down to that final fist-pump: all bluster, no substance.

The game's online component doesn't suffer so much from the campaign's fundamental flaws, though this aspect also looks to modern shooters for inspiration. As you play, you earn points that are used to unlock various enhancements: increased machine-gun firepower, automatic counter-maneuvers, extra rocket capacity, and so forth. Whether or not you have any of these improvements equipped, competitive play is entertaining. Dogfighting mode appears here too, but the unpredictability of human players gives it a little more zing, as does the ability to assist dogfighting teammates with the press of a button. Deathmatch and Domination modes hold few surprises; Capital Conquest mode is where Assault Horizon soars. Teams of up to eight players each attack enemy targets until they can descend upon the opposition's base. It isn't the erratic nature of human opposition that makes this mode so enjoyable; it's the flexibility. Whether you choose a fighter, bomber, or attack helicopter, there's a role for you in battle. If you'd rather cooperate than compete, two others can join you in campaign missions, though the addition of other players does little to freshen the stale battles.

When a beloved series moves in a different direction, it can be simultaneously exciting and terrifying for its fans. Ace Combat: Assault Horizon is a vivid reminder of why players are wary of change. There's nothing wrong with having a flair for the dramatic, and at first, you might find yourself swept up by the theatrics. But in this case, the drama comes at a cost. Assault Horizon has little to say--but it says it loudly, over and over again, hoping to fool you into thinking you're having a blast. The explosions say, "Look how exciting I am!" The overblown soundtrack screams, "Listen to me--I'm epic!" The illusion is effective at first, but it won't be long before you see through the trick. This flight action game looks exciting, but it never backs up its looks with compelling gameplay.

View Comments (14)
Back To Top
5.5
Mediocre
About GameSpot Reviews 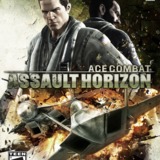 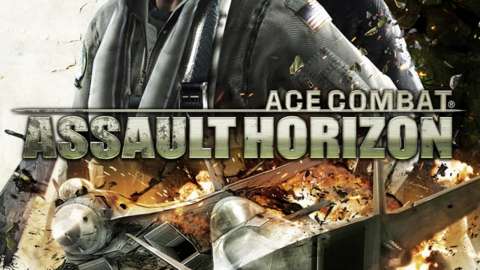 Climb back into the cockpit with Ace Combat Assault Horizon, another installment in the hit Ace Combat series.