Kid-friendly action both on and off the pitch is the main attraction in Academy of Champions: Soccer.

Academy of Champions: Soccer is aimed directly at the preteen set and has a focus almost evenly split between soccer-school social life and booting a ball around on the pitch. But even though it's more of a shallow role-playing game based on the beautiful game than a full-fledged arcade sports game, it does a good job of playing to the Harry Potter fan base with a fantastic world that replaces magic with soccer. An enchanting atmosphere and varied challenges and minigames come together to keep a young player's interest for quite a few hours.

Story mode thoroughly rips off J.K. Rowling. You take the role of a new pupil at Brightfield Academy, a mystical soccer school in a golden castle run by the legendary, very youthful-looking Pele (with occasional help from Mia Hamm). Brightfield is a stand-in for Hogwarts, with soccer players running around in the pictures on the walls, Pele playing a beardless Dumbledore, your team the Mighty Five acting like good-guy Gryffindor, and the rival Scythemore Academy assuming the villainous function of Slytherin. Soccer feels a lot like quidditch, too. Games are played on a wide variety of otherworldly pitches with huge placards, giant soccer balls, and surreal art floating in the backgrounds. Weird on-field scenery denotes where your match is taking place, such as the goals that look like the mouths of giant Mayan idol heads when you're playing against a Mexican squad. Some of your opponents even come from other Ubisoft properties. One team is made up of Raving Rabbids from the Rayman series, for instance, and you can unlock Altair from Assassin's Creed and Sam Fisher from Splinter Cell as special players. The Prince of Persia even shows up as a ringer brought in to support one of your early rivals.

Everything about the presentation is eccentric and whimsical. Characters are exaggerated cartoons, including strikers who sport huge flip hairdos reminiscent of Sonic the Hedgehog, mouselike little girls who start at midfield, and heavyset keepers who have huge guts plummeting over the tops of their shorts. Music is a bouncy Saturday-morning confection, and conversations with fellow students and Pele sound a lot like the mwah-mwah-mwah language spoken by Charlie Brown's teachers. It's all pretty twee, but it's fanciful enough to capture the imagination of the preteen crowd that plays soccer and reads Harry Potter.

The gameplay isn't as memorable as the style and setting. Story mode, which is the main way to play Academy of Champions: Soccer (the only other options are plain one-off matches and minigames), takes you through terms at Brightfield with day-by-day calendars. Every day you run through a series of three activities, ranging from on-field minigames where you pass, shoot at targets, dribble, and so forth, to RPG-lite pastimes like talking to schoolmates, scrounging up dirt on opponents, recruiting players for your squad, dealing out experience points to teammates to buff stats like speed and shooting, and buying better equipment. Full-blown five-on-five matches are a regular occurrence, although the big games take place only every week or so and have to be won in order for you to proceed further.

Everything is quick and breezy. On-field drills deal with accomplishing a simple objective, such as hitting a set number of targets in a goal in two minutes. The only offbeat minigame is a special freestyle dribbling competition that makes use of the Wii Balance Board. Chatting involves basic dialogue trees where you pick from just a couple of options. Recruiting is straightforward, since you generally have no more than a couple of choices, and you always pick up the player that you want. Upgrading teammates is a little more involved, but there are still just a handful of stat and equipment categories to deal with for each player. Every so often you top up your striker's speed by moving him from C+ to B, nudge a keeper's reaction from F to D, or buy somebody some new football boots, but you really don't need to put much thinking into roster management. And matches are speedy, three-minute affairs loaded with shots and players executing crazy moves. It's fast-paced, but not hyper-accelerated or some kind of soccer on steroids. Sure, you can make nutty dodges and pull off superhero special moves such as cartoon banana kicks when you max out a talent bar. But the enemy AI is sharp, the goalies are top-notch, and the final scores are generally comparable to those in real soccer. The schedule moves so quickly and shuffles up challenges so much that it's tough to get tired of the repetition…even though there are only so many things you can do with a soccer ball.

Oddly, though, the game makes little use of some core Wii characteristics. Motion controls are barely used. Most of the game relies on the control stick and the buttons on the nunchuk, with the Wii Remote being used largely for its A and B buttons to shoot and pass, and to take on button-clicking timed challenges in isolated duels for possession of the ball or to make a header. There is support for the Wii MotionPlus, but only to angle the ball for shots and to activate special abilities (via shaking). Multiplayer is another area where the game comes up a little short. Although you can call over a single buddy for quick-play matches on the same system, there is no way to get a few friends in on the action like in many other Wii sports games, and there is no option to go online. So this isn't much of a party game.

Even though Academy of Champions: Soccer isn't a serious arcade soccer simulation, it meets its goal of providing a diversion for kids attracted to the idea of both kicking around a ball and taking part in the extracurricular activities at a magical soccer school. It won't hold the interest of older teens or adults for very long, but then again, the game isn't aimed at them. Soccer moms looking for a way to get their kids through the winter should take a look at this one. 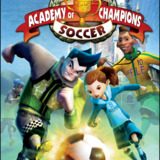