A Valley Without Wind 2 Review

A Valley Without Wind 2 blends old with old to make something new and interesting.

After committing a variety of unspeakable acts against your fellow man, you have finally gained the trust of the evil sorcerer Demonaica. Your reward for walking the path of darkness is a crystal that grants you immortality. Tarnished though your soul has become, you hope to use your new strength to destroy the very individual who foolishly placed his confidence in you. Wiping out evil and saving humankind isn't a simple task, though. To persevere, you need to rely on both reflexes and intellect.

Despite featuring a rather conventional premise, A Valley Without Wind 2 stands apart from the crowd of similar action games by deftly combining a slew of platforming stages with what initially seems like a generic turn-based strategy interface. First impressions may lead you to dismiss the latter element as unimportant, but that would be a mistake. If you don't consistently pay equal attention to each aspect of play, you won't be able to complete the game, because your progress is frequently auto-saved, and a few critical mistakes can render victory impossible. If you're ready to embrace that unusual and rather demanding dynamic, you'll find a worthwhile experience that might surprise you.

As the game begins, a randomly generated world presents you with a number of colorful tiles placed near the center of a black expanse. A few units materialize as well, and you need to move them to available spaces where they can search for resources, rescue additional soldiers and scouts from captivity, and so forth. Troop deployment serves as only the first half of a phase, though. Once you have directed all of your soldiers, you can then enter an action stage. Those levels are also randomly generated, though some are similar enough to one another that you might believe otherwise. They tend toward large open areas that are a perfect playground for your character as he runs and leaps through passages and along ledges, hurling primary and secondary spells specific to his class, or slows down to avoid hazards like thorn patches and floating blades. Each turn concludes only when you reach the end of an appropriate area and destroy a waiting windstorm generator.

You can also enter previously visited stages without ending a turn, and look for loot that ranges from an armor pickup (which wears down and breaks over time, a sometimes annoying fact despite a landscape that overflows with treasure chests) to perk tokens and sometimes even blueprints that allow your character to gain additional moves that affect his mobility. A failed attempt at an action stage doesn't have sweeping consequences, but the resulting drop in army morale can make your troops less effective when facing the creatures that roam the map.

After each turn ends, you get to see how you did. Early on, the game babies you as it acquaints you with the rules. It walks you through exercises such as building shelters for your troops and turning grassland into farmland so that you can generate precious resources. You may be immortal, but your troops need to eat, and they need to feel satisfied that the resistance effort is going well. Otherwise, they won't fight effectively when monsters inevitably start arriving in waves that emanate from Demonaica's castle and from various other landmarks that may eventually enter the equation. You soon have to worry about the sorcerer himself, as well. He moves around the map and eliminates any soldiers that cross his path. If your army's population drops to zero, that's the end of the game—no matter how many hours you might have played—and you have to start fresh with a new world.

Fortunately, you may choose from a variety of difficulty settings at the game's onset. You should be able to find options that provide you with the experience you want, whether that's a relatively laid-back endeavor or something considerably more demanding. Most importantly, you can adjust the difficulty of the action segments separately from the strategy elements. Taking advantage of the latter option decreases the likelihood that your game will end prematurely, but you can still challenge yourself with conventional platforming segments, and the devil-may-care attitude that works on the lower settings is useless when you suddenly can withstand a lot less damage before it's time for a trip back to your home base.

Regardless of the difficulty setting that you choose, you soon find that the game ramps up the challenge quite naturally as you progress. Besides forcing a turn to expire, smashing windstorm generators "purifies" adjacent spaces and makes more of the map available. Sometimes, purification is bad news if you cause a tower to activate and start spewing monsters, but often it means that you can access new stages that provide you with the gear you need to eventually trounce Demonaica. Monsters grow more powerful as the number of turns that have transpired increases, so you put yourself at a real disadvantage if you're not making the most of any opportunities to improve yourself.

Character enhancement is for the most part possible only when you destroy key artifacts or find perk tokens. The former action causes you to advance a level, up to a maximum of 16, which grants access to a couple of perks associated with that level. Tokens found by raiding caves potentially increase that number to three or four, but you can select only one enhancement from a given tier, and that forces you to think carefully as you work to craft a warrior that fits your individual style of play. You can improve attributes such as the attack power of your various spells, the height of your jumps, or your maximum health. Leveling up also allows you to venture into Demonaica's castle in search of improvements to your various magical attacks, and you also must pass a certain threshold to arrive at the final showdown.

Although at first it may seem like you're so busy keeping everything straight that you're left with no time to just enjoy yourself, that sense dissipates over time, and the game sinks its hooks into you before you realize it's even happening. That's because aside from some occasional rough spots (like a cooperative multiplayer online mode that doesn't seem to want to connect players), the overall package is put together very well. There aren't a lot of unique environmental backdrops or enemies that feel truly distinct and memorable, but the levels are attractive, and the soundtrack features a variety of beautiful compositions that make an icy wasteland seem suitably chilly or a showdown with an ancient enchanter feel properly solemn. The controls might come off as floaty at first, but they allow for more precision than you often need, and the gamepad support is terrific. By the time you properly power up your character--assuming you make it that far into your adventure--you find yourself embarking on joyous rampages through caverns, forests, and towers in a way that recalls Castlevania: Symphony of the Night.

Give it a chance, and A Valley Without Wind 2 will surprise you in all the right ways. Its unconventional and addictive blend of classic platforming action and basic strategy segments makes every accomplishment more meaningful and every failure more devastating, and the very real possibility that you will fail to vanquish Demonaica raises the stakes enough to make everything more interesting still. The result is welcome proof that there's room for innovation, even when games are covering familiar ground. Just keep in mind that you may not want to stop playing until you've destroyed every last generator and finally ensured that the valley once again lives up to its name. 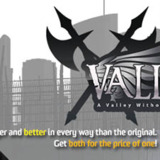