Of all the various types of games, the 3D platform game may just be the hardest to pull off. In 2D platform games, the developers restrict your options and guide you along a predetermined path that can mask flaws in the game. In fighting, driving, and sports games, the pure adrenaline of playing can mask many shortcomings. In role-playing games, a sense of scale and adventure can help cover up bad graphics or nonsensical puzzles. But when you pop in a 3D adventure game, you have the luxury of exploring every nook and cranny of a game; in fact, there's no other way to play a true 3D game except to leave no stone unturned. A developer has the opportunity to shock you with the detail, beauty, and scope of his creation. On the other hand, if a 3D game is flawed, it is there in all its misery for you to uncover. In the worst 3D games, you are a free-roaming guest in a world that you would never, ever want to visit.

It's hard to imagine a world I'd like to visit less than that of A Bug's Life, especially since I know the incredible opportunities that the developers had when bringing a Pixar movie to life on the PlayStation. By now, we all know just what incredible things the PlayStation is capable of (Final Fantasy VII and Crash Bandicoot 3 come to mind), so the fact that the developer wasted both an incredible story and a remarkable piece of hardware makes this game's failure all the more frustrating.

In A Bug's Life, you take on the role of an ant trying to secure the future of his colony. Progressing through a series of 3D levels, you explore both the outside world and work your way through the ant hill. The game is punctuated by constant voice-overs more grating than Gex: Enter the Gecko and graphics that shock only by their lack of quality. In fact, at times I would stare at the screen and ponder how any game on the PlayStation could possibly look this bad.

To add insult to injury, the gameplay is extremely frustrating. The camera is impossible to manipulate effectively, and you spend a lot of time bumping into things only because you can't work out where you stand in relation to them. Your main form of attack is a clumsy throw of fruit at enemies; it is very difficult to judge where to aim your shots.

The disc has several clips of the Pixar movie included for your viewing pleasure; it is obvious that Disney was more interested in producing a $40 advertisement for its movie than in developing a playable game. 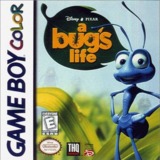