A Boy and His Blob Review

This lovable platform puzzle game will charm you with its visuals and draw you in with its clever puzzles.

Who could have imagined that when aliens finally arrived on Earth they would crave nothing more than tasty jelly beans and a bit of human companionship? The relationship between the titular boy and his blob friend is at the heart of this beautiful reimagining of the NES classic. Hand-drawn visuals make these lovable protagonists and the world they inhabit inherently likable, and it's easy to get sucked into their adventure. But the cute aesthetics hide a challenging quest that rewards players who like pushing their brains to solve tricky puzzles. The smooth pace at which the difficulty ramps up makes for a satisfying adventure in which you must constantly build upon your past knowledge to overcome the latest obstacle that threatens to halt your progress. By borrowing the best elements from the original game and throwing them into an accessible quest that encourages creativity, developer Wayforward has created an engaging and charming adventure that deftly balances its cute exterior with devious-though-always-logical puzzles.

After an evil king imprisons the blobs of Blobolonia, one blob escapes to Earth and teams up with an ordinary young child to help free his captured friends. Although the story is little more than a rudimentary backdrop for your adventure, the relationship between the boy and his blob is endearing, giving a personality to these mostly silent protagonists. The most touching aspect of their friendship is the ability to give the blob a hug with the push of a button. The warmth exuded in this embrace makes the amorphous blob as lovable as an adorable puppy, and it's easy to smile as you watch the boy squeeze his squishy friend. You can also call out to the blob whenever you get separated, and each subsequent call adds a tinge of stress as the boy begins to show real concern for his absent friend. Aside from the subtle affection shown in this odd relationship, there are background details that add depth to the story. When you travel to Blobolonia, you can see blobs trapped in cages in the background. You can choose to save them or leave them locked away, and though there isn't a tangible reward for being the hero, it's hard to turn your back on these little guys.

Your main tool while traversing these lands is jelly beans. For some unexplained reason, your blob friend can't get enough of these tasty candies, and he will transform into a helpful item whenever he gets one in his belly. You have an infinite supply of jelly beans, but you have only a few different types at your disposal in each level. In some levels you may be able to turn the blob into a ladder to help you reach higher places, whereas in other levels you need to use a trampoline or maybe an anvil to get to higher ground. Because the boy can hop only a short distance and dies whenever he makes contact with an enemy or evil trap, you rely almost entirely on your bag of goodies and adaptable friend to survive.

In the early stages, the keys to success are spelled out with obvious signs showing exactly what must be done to move further into the level. For instance, a picture of a parachute is stationed at the edge of a towering cliff, indicating that you should feed your buddy the appropriate jelly bean and float safely to the bottom. These signs are the only tutorial in the game, seamlessly showing how each new item can be used without interrupting the flow of the gameplay. There are moments in which the signs become a tad overbearing, giving away the solutions instead of letting you figure out on your own how to progress. However, as you get deeper into the game, the signs become less common, forcing you to use your mind to get past the obstacles. This also coincides with more difficult puzzles that require you to use a combination of tools. Some of the most challenging involve turning the blob into a clone of the boy who mirrors your every move, and solving these multistep puzzles is rewarding.

At the end of each of the four worlds are bosses who offer some of the most difficult challenges in the game. Although there are enemies in the normal stages, you can usually move past them without needing to kill them off first, so the boss battles present the only instances in the game in which you must partake in fast-paced combat. It's a blast dodging their many attacks while you try to figure out what candy beans would best take them down, but the controls are not quite up to the task. It's easy enough to navigate the environment and interact with your blob during the slow-paced puzzle levels, but when you are forced to move and react to the speedy blows of a deadly boss, the controls are too sluggish. With enough determination, you can pass these sections, but they are much harder than they should be because the boy does not quickly respond to your commands. It's a shame the controls get in the way during these battles, because they are extremely well designed, forcing you to take advantage of your jelly bean powers in a number of interesting ways.

The 40 stages can take 10 hours or longer to play through, but there is even more to do after you finally vanquish the evil king. Each stage contains three hidden treasure chests, and if you find them all, you unlock a bonus stage. It can take quite a while to find every hidden chest and make your way through all 80 levels, and the game continually presents obstacles that will force you to make use of your jelly beans in clever new ways. Tangible rewards are only the icing on the cake of this great adventure, though. The lovable protagonists are so endearing, and the levels so beautifully designed, that it's a pleasure just to make your way through these worlds and see everything they have to offer. And though the puzzles start off easy enough, they slowly ramp up in difficulty, tossing a number of imposing obstacles in your path before you figure out how to get around them. This is a great update to the NES original, a charming and rewarding game that stands tall alongside modern platformers. 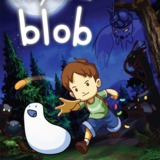